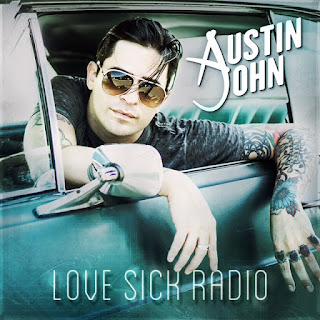 Take a good look.  No, seriously...get close.  Look familiar?  Even a little?  If you think yes, but can't place the guy in the photo, that's because it's Austin John...Winkler...as in the former singer of Hinder.  Yeah!  That guy!  Thing is...he forgot how to rock once he was kicked out of/departed from the band.  Like so many others doing the trend jumping thing, Austin has decided to try his hand at country music now, at least on this track.  But we're not talking conventional, traditional country here...no, no, no.  We're talking Florida Georgia Line, hip hop Bro country, with looped drum beats, rhythmic rap-esque vocals, and no real sign of actual instruments being played...just a bunch of beats strung together with some keyboard sounds and various layers of Winkler's vocals mish-mashed together.  "Clique To Follow" is a prime example of this.  It's not rock, it's not country, it's not rap...heck, it's not music, if you ask me!  What an uninspired mess this thing is...

"The Plague" gets a little better, as Winkler relies more heavily on actual singing, Summers seems to have some degree of talent (although I have no clue who she is), and I think there may be actual instruments played here, but the drum loops and drum machine are tired sounding.  You can hear the "Lips Of An Angel" vocals coming from Winkler here, however, and the listener is given reason to believe that the first track was just an anomaly of some sort.

"Carry You" is pretty dark sounding and has elements of modern rock mixed in with what would most likely be labeled as electronica and it is one of only two songs on this collection I would say that I like, with Winkler's voice sounding especially strong here.  In fact, I could even go so far as to say I could tolerate an entire album of material like this from Winkler...err, Austin John...although I'm guessing that won't happen.  Hinder it is not, but at least there seems to be aim and direction with this track.

"Howlin'", according to the press release, features "country star, Jessie James Decker", but, as someone who used to program a country station and who currently books country and alt-country acts from time to time, I can honestly say I have no clue who Jessie James Decker is.  I will say this, however...she is attractive and she can sing, for sure, but I don't know how someone born in Italy and who sings this type of music can consider themselves "country".  But I digress.  This is the best song here, and that is largely because of relatively strong songwriting and another strong vocal performance from Winkler, coupled with Decker's equally strong presence.  Again, I wouldn't call this "country" music by any stretch, at least not in the traditional sense, and if this is what passes for country now, I don't think I would even know if I accidentally turned a country station on.  Again, we have looped drums and minimal actual instrumentation here, but for a quasi-ballad, its actually not a bad song at all.  As with "Carry You", I could probably listen to an entire album of this style of music without having an aneurysm or some sort of seizure...probably...if I had to...

"Road To Paradise" reverts to the brutal schlock that the first couple of tracks was, with a particularly inane chorus and a keyboard line that sounds like it was borrowed from a clown act at a circus...on an island populated by Kenny Chesney and Jimmy Buffet and their fans.  Just...plain...bad...  If I could program my CD player to auto-skip, this could well be the first song of 2016 that I would blow right past without a second thought.  Horrible.

"Hate That I'm Loving It" mercilessly brings the EP to a close.  I say mercilessly instead of mercifully because there is no mercy given here.  This is a blatant stab at airplay in some kind of non-rock genre...country, hip hop, college, alt...SOMETHING...and it is just bad.  Yeah, you can recognize Winkler's voice to a degree, although it is a bit more strained at the top end than on the couple of decent songs here, and it is by no means a good song.

I have no idea what Winkl...sorry...Austin John's...goal is with this EP, but if it is to completely alienate Hinder fans, and also to turn off 99% of the music listening population of ANY genre related to this EP, then he succeeded, because this is a disaster.  I think the reason there are no musicians credited here is because either there ARE NO MUSICIANS on the record, or they simply didn't want their name associated with this dreck.  All I can say is, for their sakes, I hope Summers and Decker have strong fanbases that are going to be willing to overlook this steaming pile of horridity, or else their careers may be in danger (assuming they have careers...I still have no clue who they are!).

Rating:  Turn it down...WAY down...to 3, and that's only because I didn't projectile vomit on my monitor or keyboard when "Carry You" was playing, and I almost caught myself tapping my foot to "Howlin'".


Back To Reviews Index
Posted by arttieTHE1manparty at 4:09 PM