DECYFER DOWN "The Other Side of Darkness" 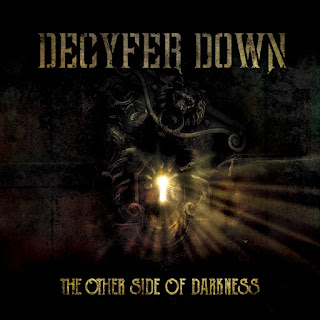 After taking a couple of years off, modern Christian rockers, Decyfer Down, returned to the scene as part of the successful City Rockfest Tour with Disciple, Nine Lashes, and Seventh Day Slumber, and almost immediately had fans begging for new music, as it was evident the band's spark was still there in their live performances.  To that end, the band has answered the call with a brand new album, The Other Side of Darkness, and a new set of tour dates to go along with the new record.

Returning on this record are the three longest-tenured members of the band, Harris, Mills, and Clonts, who have all been with Decyfer Down since at least 2008 (Mills co-founded the band in 1999), along with relative newcomers Furr and Millhouse who take over the rhythm section of the band, and to my ears, they have never sounded tighter.  Continuing to evolve musically while still sounding like, Decyfer Down, the band retains a bit of the southern rock-meets-post-grunge sound of the last album, Scarecrow, but for the most part they return to the more aggressive, straight-forward modern rock sound fans grew to expect from them prior to Harris taking over as the singer following the End Of Grey album.  As such, Decyfer Down plunges right back into the modern hard rock waters they so expertly navigated previously when songs like "Desperate", "Burn Back The Sun", "Fight Like This", and others were burning up both the Christian Rock and Modern Rock charts.  While Scarecrow failed to produce any charting singles of it's own, there is no denying the power of songs like "Westboro" and "Worst Enemy", especially in the craftsmanship of the songs themselves, so it should come as no surprise that both eras of the band have been melded together to bring out quite possibly the best album in the band's catalog.

The lead single for the album, "Nothing More", is a prime example of where the band is at musically, as it comes out charging hard from the get go with a crushing, Sevendust-inspired guitar riff and pummeling drums, setting the stage for Harris' edgier, angrier sounding verse vocals, only to ease back slightly to allow his more melodic singing style take over on the chorus sections.   Fans obviously took to this approach from the band as it almost instantly managed to crack the top ten on the Christian Rock charts and garnered airplay on mainstream modern rock stations as well.  My personal favorite from the record, "Dead Skin", and album opener, "Rearrange" are also of this same angry, chunky modern rock style, incorporating aggressive rhythm guitars, tight bass lines, punchy drums, and snarly verse vocals in front of  more melodic chorus vocals.  The fact that the band is now a three guitar outfit should not be lost on listeners, as the overall sound is now much fuller, particularly on the harder, heavier numbers, with virtually every nook and cranny crammed with distorted six string angst of some sort.

The band does take risks on The Other Side of Darkness, however; I don't want to give the impression that all is aggression and channeled rage at a fallen world.  "Believe In Me", for example, is far more laid back and melodic in every way, Incorporating an un-credited piano/keyboard, "Believe In Me" backs off on the tempo and the rasp and allows Harris to display a very strong tenor singing voice on what I am guessing is a deeply introspective song with some touching lyrics about others seeing more in us than we see in ourselves.  I have a hard time seeing a situation where this song isn't just soaked up by both Christian Rock and Christian CHR radio charts, as well as on modern rock charts and stations, as it is expertly performed.  Likewise, older fans of the band will undoubtedly appreciate the updated, acoustic take on the band's classic hit "Burn Back The Sun" which hit number 1 on the Christian Rock charts ten years ago.  Harris' voice is different from the band's previous singer, yet he does an excellent job on this track which is stripped bare of any pomp or power in this acoustic state, which would leave a lesser singer exposed and vulnerable vocally, especially when presented to a fan base that knows the song so well.  Harris handles it perfectly, in my opinion, and makes the song his own here.

Other favorites here for me are the title track, "Beautiful Lie", and the love song, "Lifetime", which has just a hint of a CCM feel to the first verse before kicking into a melodic-yet-rocking chorus.  Definite wedding material here for the rocker crowd!  "Anchor Me" is another really solid hard rocker that is top three or four for me here, and "Don't Walk Away" is a great ending to the new material here, giving way to the previously mentioned acoustic remake of "Burn Back The Sun".

In all honesty, there are no weak songs here, and nothing here is overly blown up or bloated by excessively long performances, as the longest track clocks in at just 4:05.  Nothing feels rushed, nothing feels shorted...each of the nine new tracks here feels complete and given appropriate amounts of time to grow and build to their respective high points.

The packaging is very nicely done, with complete lyrics, songwriting credits, thank you's, and production information.  There's a cool full-band photo under the tray insert, as well, and the whole project has a very professional feel despite being an independent project.  The production and mix are spot-on as well, with no muddiness or slurring of sounds anywhere on the disc, and there is plenty of punch to the drums without having them dominate the mix.

Overall, one of the best start-to-finish products of the first half of the year for me, and a powerful return to form for this excellent band.  As much as I enjoyed the change in style on Scarecrow and the maturation of the band's songwriting, there is something to be said for a band fully embracing who they are, and then taking that identity and moving forward with it.  Decyfer Down does just that on The Other Side of Darkness.