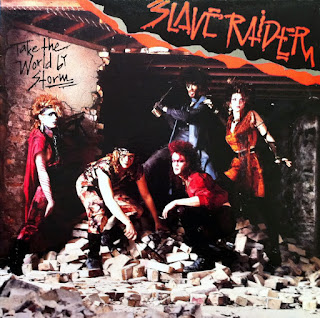 Reissuing long out-of-print material has become the lifeblood of many a small, independent record label, to varying degrees of success.  Some labels take great care to find new material...whether it be songs, interviews, magazine articles, etc....to include in their reissues, along with cleaning up and enhancing sound, updating artwork, and all the other bells and whistles that make a reissue great and worth the money.  Others do absolutely NOTHING, even going so far as cramming two albums on one CD but cutting out songs to make room for the "majority" of the tracks, simplifying full booklets into single sheet inserts, and doing nothing to better the quality of the material being presented.  Thankfully, Divebomb Records falls into the first category, as they have done me a HUGE service by reissuing this long out-of-print, impossible-to-find-cheaply gem from Minnesota rockers, Slave Raider.

Slave Raider was something of an oddity to a lot of people.  Looking something akin to Twisted Sister versions of pirates...albeit pirates wielding a chainsaw WAY before Jackyl made it cool...yet sounding far more metallic than their glammy image would seem to indicate, Slave Raider was a massive success in and around the Minneapolis area, but that success never translated into broader appeal, even with the band signing to a major label.  The main problem was that the label was Jive Records which knew NOTHING about how to handle a rock/metal band like Slave Raider, because they were too busy with the likes of DJ Jazzy Jeff & The Fresh Prince (Will Smith to the uninitiated), Kool Moe Dee, and Samantha Fox.  The label's target audience...pop rap and dance pop...had no idea what they were purchasing if they bothered to pick this album up, and most would likely discard it upon hearing it, as they were certainly NOT fans of the style that Slave Raider presented.  Wrong label, wrong band, wrong relationship, plain and simple.

Musically, Slave Raider wasn't really "hair metal", which had really exploded into full-blown, nationwide popularity by 1986, and they weren't thrash, a la Metallica, Anthrax, etc.  Looking...and, honestly...sounding more like a band such as Lizzy Borden, or the equally fringe Zodiac Mindwarp and the Love Reaction, Slave Raider combined heavy guitars, thundering drums, and snarling vocals  to create a hit-and-miss collection of hard rockers that, at their best, were catchy and solidly anthemic in their style and sound.  Take for example the cult classic title track, which has stuck with me since I first heard it back in '86 or '87 on a VHS recording of Headbanger's Ball (I lived in the country and didn't have cable! The HORROR!!!).  The guitars absolutely shred on this song, and Caine is in excellent vocal form as he snarls about the success his band is going to achieve as they "take the world by storm".  Lyrically, the song is uber-simplistic, but catchy as all get out, and it's the type of sing-along, pump-your-fist type or rocker that labels were looking for from bands such as Slave Raider, and it is likely what Jive Records latched onto when they were first presented with the opportunity to sign the band.  Other top rockers include more mid-tempo audience chanter, "Make Some Noise", "Long Way From Home". and the second-to-last track on the record, "The Devil Comes Out In Me".

This is where the "at their worst" part of my previous statement kicks in.  Lyrically, these guys are not poets or philosophers, to be sure.  Even on the nicely rocking tunes, it soon becomes apparent that the above average rocking can only go so far to cover up sub-par lyrics.  Whether we are talking about "The Devil Comes Out In Me", which is a reflection by the band on their partying ways, taking about "...drinking some whiskey/Maybe a snort of some 'caine", or the equally rocking "Burnin' Too Hot", with such inane lyrics as "Smooth talking - fast walking/Grinding machine/Wearing a pair of painted on blue jeans/Came up to me/One thing on her mind/Told me I was one of a kind", the lyrical content just leaves me kind of....yikes...  And, the really ironic part of it all, at least for me, is that the band was billed as having deeper,  more insightful lyrics that went beyond the party rock cliches of their peers.  Huh?  Outside of the title track and "The Black Hole" (more on that song in a minute), pretty much EVERY song here is about partying and having a good time.

Another frustrating thing for many listeners will be the fact that on an album that is only eight songs long...which was VERY frustrating to teens on a limited-music-budget back in the day...there are two tracks that take up almost half of the album, time-wise!  "Survival Of The Fittest" is so bloated with an intro laden with speech outtakes from various American presidents about the use of atomic/nuclear weapons, and so plodding in its musical pacing and approach, that it knocks an almost-seven-minute hole in the record that its hard to recover from.  With Caine sounding a LOT like Lizzy Borden, vocally, the album's closer, "The Black Hole", is even more guilty of bloat-for-bloat's sake.  The song clocks in at over 8 minutes in length and does less work than the classic Twisted Sister opus, "Horror Teria (The Beginning)", half of which is the similarly paced, styled, and performed...but significantly more memorable  and impactful..."Captain Howdy".  The main problem on this track is the MASSIVE, minutes-long instrumental break  which starts at about 3:45 and carries on for the next four-plus minutes without Caine ever singing another note.  The first guitar solo is nice and skillfully performed, but its followed by a rather monotonous and uninspired drum solo, which bleeds into a really cool-sounding, but equally unnecessary bass solo, which THEN leads into a couple more guitar solos and another drum break...all of which has left me plenty of time to go make a sandwich, vacuum the main floor, finish reading a chapter in whatever book I have my nose buried in, and STILL get back before it all ended!  I don't know if this song was played live, and if it was I don't know that all these solos were included, but if they were I would imagine there was massive flooding going on in the bathrooms as everybody knew they had time to hit the head before the song finished.  Seriously, the musical section at the end is LONGER THAN THE LYRICAL SECTION...and Slave Raider was not a "jam band"!  So, what you end up with are two songs that take up nearly 15 minutes of an album that runs only 34 minutes total, and neither one is a top 5 song for me from an eight track album, so there is an obvious issue for me.

Sound-wise, Divebomb has done an excellent job of cleaning up and beefing up the sound of the original record, giving a bit of extra thunder to the bottom end...especially the drums...and making sure that the volume is equally leveled throughout the album's entirety, which I felt was an issue on side two of the original (I had this on cassette back in the day).

The packaging here is top notch, as is to be expected from Divebomb.  A full 20 page booklet has been added to the packaging, which includes not only a band introduction/biography, but also full lyrics to all eight songs, an inlay of the original cassette "J card", the band's original press release for the album, a full article from Kerrang!, a collage of various concert posters and flyers, and several new color photos that I had not seen previously.  Very, very cool stuff.

Overall, this is a remarkable reissue package and well worth the money.  If you have never heard of the band, or have only heard the couple of singles they managed to squeeze into rotation on Headbanger's Ball back in the day, you would do yourself a service to track this reissue down and not pay the insane amounts of money commanded on eBay and trading sites for what is, in all honesty, an inferior product now that this excellent reissue is available.

Rating:  The album is still the album, original flaws and all.  As such, I would rock this at a solid 6.5...but as a package, this easily cranks to 8.5!

Back To Reviews Index
Posted by arttieTHE1manparty at 10:59 AM