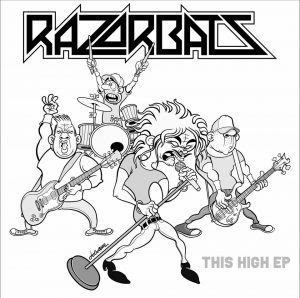 It's been just five short months since the Razorbats took home the crown as having the best record of 2016 according to us here at Glitter2Gutter, as Camp Rock quite simply blew us away with its hard-charging 70's retro rock sound, intermixed with a bit of the early 80's scene and a punk attitude in places.  Not wanting to lose the momentum they had established, Razorbats returned to the studio to record this little 3-track EP, This High, and are set to unleash it upon the world digitally in June of 2016, and again on vinyl in September 2016.  Our good buddy, Kjetil Wevling, the guitarist for the band, was kind enough to send us a preview copy of the release so that we might get you pumped for what's to come.

This mini-EP kicks off in fine fashion with "The Hurricane", which feels like a direct continuation of Camp Rock, complete with a beautifully fuzzed-up 70's guitar tone and a great, simple but snappy drum line that just drips 1978 from the start.  With only three tracks to compare here, there is still no doubt that this is my favorite on this little effort, as it is completely in the band's wheelhouse, with Even delivering another impressive vocal performance and Kjetil ripping off a nifty solo between the choruses.  Reminding me of the style of "Planet Riff" from Camp Rock, fans of T. Rex, the Sweet, or early Cheap Trick are going to cling to this track right from the start.

The title track, "This High", shifts straight into high gear right from the start, with a short, staccato snare burst from Knut before Kjetil comes charging in with the guitars, accompanied by Stig on a nice, driving bass line.  Even's voice continues to retain it's young Joe Elliott qualities, but with a nice punk edge to them, and the backing vocals are solid here as well and add a nice touch in the chorus sections.  Kjetil states that this punkish number is about "two junkies in love who enjoy each other...and enough dope to kill a small Norwegian village".   I can't speak to the killing off of a portion of the Nordic population, but I can attest to the tongue-in-cheek nature of this energetic rocker which also would have fit very nicely on Camp Rock, especially the edgier tracks from that record.

The EP closes out with the ballad, "Born In The Fast Lane", which Kjetil describes as "a reflection on what happens when a successful band breaks up and you find yourself broke and sleeping on other people's couches, but still feel like a star".  Stark from the outset, with a somber guitar riff and Even setting the stage, this beautifully crafted rock ballad (NOT an 80's power ballad, mind you...), has a really nice lyrical approach, echoing the subject's pain and frustrations, but also indicating hope for something better, especially with the ringing refrain of "keep your eyes on the road and your dreams close to the heart".   Slow, without becoming plodding, the track is of the same ilk as one of my faves from the band, "Desolation Highway", from Camp Rock, and its a winner all the way.  Strong performances abound here, from the understated approach of Stig's bass and Knut's drums, to the way  Kjetil just lets his guitar sing along in the background as Even channels a bit of Art Alexakis from 90's alternative rockers, Everclear, in the way he pours extra emotion into his vocals.

The production is solid and not polished at all, which is as it should be, as the distortion in the guitar is a huge part of the sound of this band.  One thing I did notice here is that the 80's elements that were mixed into Camp Rock in small doses are pretty much non-existent here, and that's fine.  The addition of a touch of the alterna-rock 90's on "Born In The Fast Lane" is masterfully done as well, and is not a hindrance to the overall sound of the track or EP in any way.  Growth, even in a retro-styled band, is essential, and Razorbats take just enough of a tiny step here to keep this EP from feeling like nothing but a collection of outtakes from Camp Rock.

Being an all-digital preview, I have no ideas about packaging for the vinyl edition which will come out in the fall, but the cover sketch is pretty cool and fits the retro stylings of the band well.

While I obviously would've preferred a full-length release, I have to say I am not only fully satisfied with the quality of this EP, but my thirst for new material from this outstanding band has at least been slaked for the time being.  I truly hope that these songs find a home on an upcoming full-length release in the near future, but for the time being, I would encourage anyone who loved Camp Rock, or anyone who loves extremely well-done, 70s-inspired hard rock, to seek out This High EP when it becomes available in June.

Rating:  WAY TOO SHORT on time, but plenty long on what it delivers, This High EP is definitely crankable.  Twirl the knob to 9 for the quality of material here, as I feel it is completely a continuation of the greatness of Camp Rock.

Back To Reviews Index
Posted by arttieTHE1manparty at 7:07 PM