IN THE VERSE "Transformer" 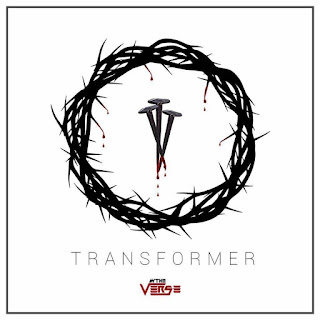 Christian rockers, In The Verse, return with their first full-length album on December 9 with Transformer, a GoFundMe fan-funded effort that finds the band expanding to a full compliment of four members with the addition of Schumski on drums.  Combining elements of modern hard rock with smaller doses of classic rock and some nice keyboard sections, this Wisconsin-based quartet seeks to expand upon the surprising-to-some success of the band's EP Hostage, and it's single, "Disaster", which continues to garner large Christian rock radio support.

One of the most noticeable things about In The Verse has to be the rich tenor of Noah Hulbert, which seems to glide effortlessly across the fuzzed-up guitars and pounding rhythm section.  Not a screamer, at least for the most part, although I do wish he would cut loose just a bit more than he does (we'll get to that in a minute).  He's also not one of those pseudo-death singers who scrape the bottom-end of their range only to completely lose those of us who actually care about what is being sung.  Hulbert instead focuses on staying solidly within his comfort zone and actually sings a lot of the vocals on this record.  That's right...sings.  Now, that doesn't mean he steers completely clear of adding some edginess to his vocals in places, but never are his lyrics unintelligible, and never does he drift into that "I'd rather hear a cat scratching a chalkboard" emo-whining that continues to be popular with so many bands today.

The album starts off on a huge note with my second favorite track of the record, as "Compassion" leads-in with some cool synth tones from Cerfus, soon to be greeted by the chunky rhythm guitar of Hanson and the pounding of Schumski's kick drum and some really tight snare rolls.  When I first heard this song, I had a mixture of 70s arena keys interwoven with current guitars and drums from the 80s and 90s combine, and I think that this still stands as a fairly accurate representation of what "Compassion" does musically.  I really, really enjoy this track, although I would be lying if I said I didn't wish Hanson would cut loose with a totally ripping guitar solo during the bridge section, but as it is, this is a really nice table-setter for the record that is to come.

"Dying Words" changes the tempo up, utilizing more of a piano sound than a synth sound on the keyboards, and Hulbert has to negotiate some lyrical acrobatics to get through the verses, but I really like the different musical approach utilized here.

As far as the rest of the songs go, there are any number of really good radio rockers here, but for my money, nothing touches the aggressive, metal-infused churning of the debut single "Shatter To Pieces", my favorite track on the record.  The track kicks off with some excellent rhythm guitar work from Hanson, along with some jackhammer drumming from Schumski, before  a nice chord progression leads Hulbert's vocals into the fray.  This song is the most logical follow-up to "Disaster", and is a song that was instantly embedded in my brain within a couple of listens.  There is a ripping guitar solo near the midpoint of the track, as well, and "Shatter To Pieces" is a perfect example of the band blending more classic rock/heavy metal sounds into a modern hard rock number.  Love it!

"Final Days" is another solid rocker that actually features some true harsh vocals from Hulbert, and I think the contrast between his regular singing vocals and the screams actually works very well.  This is a song that I can hear in my head in a live setting, with the power chords of the chorus just exploding from Hanson's guitar as Schumski wails away and abuses his drum kit...all before Cerfus provides a calming, soothing keyboard interlude for about thirty seconds before the band comes crashing back in.  This is another track that I would imagine has to end up garnering some significant Christian rock radio airplay.

One thing that I really think speaks volumes about In The Verse is the way they can jump from the hard and fast aggression of "Shatter To Pieces" only to flow directly into the piano intro of "Alone", a much more radio rock sounding track, without missing a beat or making it sound forced or out of place.  Similarly, "Your Sacrifice" shows a band that is able to really downshift from an uptempo, charging rocker through the verses into a much more sweeping, melodic approach on the choruses, with little effort.  Cerfus is a huge part of holding the sound together on a track such as this because his keys are such an integral part of the musical tapestry on a song like "Your Sacrifice", without trying to force their way to the front and dominate the song...which they absolutely shouldn't do.  It's also nice on this track to hear Hulbert cut loose a couple of times with the angst vocally, which adds yet another nice contrasting element to the song.

"Mid-life's Night" is a song totally unlike anything the band has done on this record or previously, at least that I have been exposed to, as it has a very 90's alternative-yet-melodic feel to a good chunk of it, with some solid keys and a definite musical flow that has more in common with music of that time period than the buzzy, chunky riffs and crushing drums of today's hard rock scene.  Dont' get me wrong...I really, really like the song...in fact, I'd put it in the top 3 or 4 tracks on the record.  It's just so different it really stands out and bears special mention here, in my opinion.  It is also the perfect lead-in to another really melodic modern rocker in "Afterlife", which features some sweeping keyboard melodies in the verse sections, and a couple of mini-synth solos, of all things, following chorus sections, with the guitars being the underlying support here rather than the driving force.  It sounds backward in my description, I know, but the juxtaposition of instruments here is actually very cool to hear, and is a unique...and promising...way to end the record.  Total proof in these last couple of tracks that In The Verse is not a band that is going to be easy to pigeonhole as far as style goes.

Lyrically, In The Verse remains very open about their faith, not hiding behind obscure "is he singing about the love of God or the love of a woman" type of lyrics, with songs touching on the listener really taking stock of where he/she stands in their relationship with God and whether or not that is where they want to be if the End of Days should come.  A great lyrical example here is found in the opening verse of "Dying Words" when Hulbert sings:

"Specifically, to those who've expelled
The idea of a god that's not themselves...
Well for you then, this isn't gonna end well...
Promises that you can't keep,
Sowing seeds that you won't reap,
Wasting everybody's lives...
Who believed in your lies..."

Great stuff that speaks directly to the listener, challenging our own worldview and our own opinions of ourselves and where we place our relationship with our Creator versus our self.  Lyrics such as these are found scattered throughout this record and are refreshing to hear for those seeking true Christian lyrical themes in these days of politically-correct "positive rock" versus "Christian rock". Sure, topics like loneliness and despair are covered as well, such as in the previously mentioned "Alone", but they are tackled in a manner that shows the performer reaching out to God and His love, and not to human love, to fill that void within.

Is this a perfect record?  No, not at all, but I have yet to find more than a handful of records that even bump up against that ceiling.  There are a couple of tracks that sound a bit too similar for me to really separate them in my mind, but fortunately they are not seated side-by-side in the tracking of the record.  The title track is a bit plodding for my tastes, and something seems to be missing from it that would really make it pop.  The production is slightly thin in a couple of places, but not to the point of distraction at all, and some minor manipulation of my EQ to bump up the bottom end a bit totally compensates for this.  The mix is very nicely done with great separation between the guitar and keys, and the bass and drums, as well.

For a sneak peek...err...listen, In The Verse has allowed us to post this link to their latest single, "Shatter To Pieces" for you to download and check out yourself.  If you like what you hear, you are still able to pre-order the record, Transformer, at their GoFundMe page, which can be found here.

Solidly performed, with some really, really good, aggressive guitar rock in places, followed by truly musical, keyboard infused modern melodic tracks, Transformer is a nice step for the Milwaukee rockers.  Hanson definitely plays to his strengths with his buzzsaw approach to rhythm guitar, and he rips off several nice solos and fills, although the metalhead in me is always down for a couple more truly aggressive guitar solos in a song or two, but overall, very little to complain about on this debut full-length from In The Verse.  I have to say that Cerfus really surprised me here, as I am NOT a keyboard guy in general, as most who have read this site can attest to, but his understanding and interpretation of where the band is going with these songs, and the way he infuses his instrument into these tracks, is a definite enhancer for any number of the songs here, whether hard rockers or more laid back, melodic numbers.  And, it goes without saying that the addition of a live drummer is always a big-time plus, and Schumski handles his place behind the kit very, very well.

Rating:  A solid effort, crank this to 8 and keep your fingers crossed that we will be able to see these guys out on tour in the near future.

Posted by arttieTHE1manparty at 9:36 PM