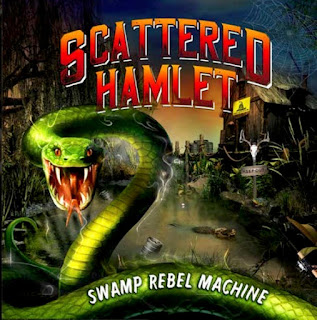 Okay, before you read any further, I want you to do three things.  1)  Look at the album cover...I mean really look at it.  2)  Check the names of the songs here.  3)  Look at the instruments played by band members.

Got all of that done?  Okay...now, the image you get in your mind is probably nowhere near as sleazy, swampy, or southern as Scattered Hamlet actually is!

To best describe this band, all I can say is imagine taking a southern rock band, with the Confederate Rebel flag AND the Don't Tread On Me flag both in tow, mixing in a handful of Harley Davidson motorcycle grease and about 10 gallons of swamp water, a thick dollop of sleaze metal....and then stirring it up with the moan of a slide guitar...and you have a decent idea of where Scattered Hamlet is coming at you from, musically.  And even then, you may find yourself blindsided by this band whose members probably only come to town every now and then because there's electricity to plug their instruments into!

The CD opens with some swamp sounds...frogs, birds, water, etc...leading into the marching drum cadence you would likely expect from a song called "Battle Hymn", but it also utilizes the type of horror movie vocal overlays that Rob Zombie likes to infuse into his songs to such great effect.  When I first popped the disc in, I thought I was probably looking at another intro, which we all know I'm not that into, but then a shotgun blast hits and Joad's vocals come snarling up from beneath the green film of the swamp these guys have crawled out of, with guitars gurgling right up alongside that voice, chug-chug-chugging their way to the surface to grab you by the throat and commands you to sit your ass down and listen.

"Whip-Poor-Will" continues the gut-wrenching sludginess, with Joad's vocals at times recalling a slightly less pissed off Phil Anselmo if he fronted a biker band in a dive bar in the deep south.  Some classic guitar rock elements combine nicely with metallic edginess to churn the sound to an angry, sleazy froth with a solid nod to the drumming of LeBas here, as he labors fast and furious to keep the track thumping along, not allowing it to drift off course at all.  "Stonewall Jackson" one of my favorite tracks, musically, follows suit, as the slide guitar solo, alongside the much more punkish-sounding guitars that are also utilized on the solo, really give it a southern-fried metal sound that serves the band well.

"Four Barrel Mojo" is the required metallic shuffle song on the record, although the chorus section breaks out of the breakneck two-step pace and into more of a mosh-pit mentality.  Joad's vocals here carry hints of Taime Downe from Faster Pussycat at times, especially in the way he phrases the verses and the little snarl he adds to the end of certain words.

"White Trash" is another fun rocker that is a definite nod to the sleaze rock of old, again utilizing a Faster Pussycat approach to the spare use of instruments underneath the verses before fully ripping into the chorus sections.  Easily one of my two or three favorites here,

The title track revisits that swamp scene I mentioned at the outset of the record, but it doesn't take long for the bottom end of the guitars to start muddying up the serene scene, churning up the waters and leading the vocals into the slowly building mosh that is stirred up to full force by the time the chorus hits.  There are a lot of moving parts musically on this track, with tempo changes, a breakdown of sorts, and a pretty cool guitar solo to boot.

"Green Bastard" is as much punk as it is biker rock or metal, especially in the chorus section, while "Outlaw Breed" drives the band back to the more sleaze-styled approach used on "Four Barrel Mojo" and "White Trash".  The harmonica intro to "Rimfire" doesn't do anything to warn you of the full-throttle fist-pumper of a biker-boogie track that is to follow just 30 seconds later, and "Buckshot" revisits the Anselmo-lite vocal style of vocals in a slow build of a track that eventually breaks out into a pretty cool bluesy-metal guitar solo in a rather surprisingly uptempo track.

The album closes with the band's epic track, "The Lesson", which clocks in at nearly 8 minutes in length. Opening with a very "For Those About To Rock" AC/DC styled riff and build, the band backs off to give Joad's angry vocals room to build and name-drop Johnny Cash, "Folsom Prison Blues", Waylon Jennings, Lynyrd Skynyrd, "Simple Man", and all things southern-fried country...but with a bucket of sludgy metal thrown in for good measure.   As unmatched and unrelated as all those things may seem, "The Lesson" has a definite Outlaw country feel to the lyrics and to the meaning behind the story, kinda like what David Allen Coe did with "The Ride" (look it up), while the music allows the band to showcase any number of musical influences without ever letting the listener forget that this is deep-south biker metal, not Nashville-slick country or LA styled glam.  Surprisingly good and again, one of my top three tracks here.

The mix is very well done here, and the production is a sleaze fan's delight, particularly in the treatment of the guitars and vocals.  The packaging is every bit as simple as you would likely expect it to be, with a simple single-fold insert with a band photo and credits, but no lyrics.

Not sure what I expected when I popped this in, but what came out was NOT my expectation...and that's a good thing.  Scattered Hamlet is so much more than I anticipated, and deserves your attention...and will demand it if you don't give it willingly!  There is really very little to not like here, but if I had to drop a track, it would be "Green Bastard"...and that's only if I was absolutely required to make some sort of change.

Rating:  Crankable, no doubt.  If the sleaze and sludge on the dial doesn't keep you from being able to grab hold, make sure to turn this up to 8!

Back To Reviews Index
Posted by arttieTHE1manparty at 11:28 AM