OTHERWISE "From The Roots: Volume 1" 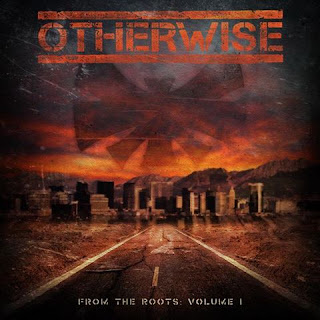 So...apparently the MTV Unplugged movement didn't die with the Stripped series which featured a lot of the hair bands of the 80s offering up acoustic renditions of their biggest hits.  Las Vegas rockers Otherwise have also decided to...not rock?  Well, kind of.  From The Roots: Volume 1 is an all-acoustic set or songs from the foursome, featuring three new renditions of songs from their major label debut, True Love Never Dies, plus three from their most recent studio effort, Peace At All Costs.

One thing to note on these acoustic re-workings here is that they are just that...re-workings.  The arrangements are altered, which was more than necessary in a couple of places, and more for effect in a couple of others.  So, if you are a purist who only wants to hear songs in their original format...why the heck are you even picking this EP up in the first place?!  Anyway...

The first two tracks come from Peace At All Costs, with "For The Fallen Ones" and "Love & War" getting the first run at things.  Both are done very well, with the interplay between the Patrick brothers being a focal point not only here, but throughout the record.  "For The Fallen Ones" has some of the coolest percussion on this entire EP, with the tambourine and snare being the main instruments used, but it also sounds like some maracas or shakers of some sort are also being utilized, giving the track a bit of a Latin percussive element.  "Love & War" is an interesting turn on a pretty hard rocker, and I think it works pretty well in this format.  It has something of a country rock feel to the track in this format, although Adrian doesn't slip into any twang territory vocally.  Obviously there are some dynamics that are changed when you venture into the acoustic realm, but I think the band handled it very well on these first two tracks, as well as follow-up, "Crimson", from True Love Never Dies.  Here, Adrian softens up his vocal approach, giving an extra bit of emotion to the track and really driving home the feeling on one of my favorite album cuts from the band.

The only real stumble for me comes on track 4, as "Vegas Girl" comes across like an acoustic lounge song, although the arrangement allows for the song to morph entertainingly into "Horse With No Name" for one verse and a chorus, before flowing seamlessly back into the original track.  I will guarantee this is a hit in a live setting, but here, while cute a few times, it wears itself out after repeated listens.  And, while it's humorous to hear Adrian drop the f*bomb in this track (he REALLY emphasizes the "ck" at the end of the word with just makes it completely pop out of the acoustic setting it is surrounded by), as I've stated before, I can easily live without a bunch of swearing in songs...especially this word...and it sounds rather juvenile after a time.  That being said, I can't deny it made me chuckle the first couple of times I heard it.

"Die For You" stays the closest to its original song structure, and probably works better than any of the re-recorded material presented here in that aspect, which makes sense since it is the biggest hit the band chose to rework on this effort.  Ryan uses a flamenco-sounding style on the solo here, which is really cool, and Adrian, again, shows just how powerful his voice can truly be.  Also, Tony's bass work is a bit more noticeable here than on other cuts.  I'm not sure if he's using a traditional acoustic 4 string...I'm assuming it's not an upright...but he definitely gets some feel going here.

The album closes with "Never Say" from Peace..., and, again, the band tinkers with the song structure a bit, but the punch of this rocker still shines through more than on any of the other tracks.  I would actually go so far as to say I prefer this version, to be honest, and I am anxious to see if it makes it into the band's live set, as I think it most accurately conveys the personality of this typically high-energy, high-interaction band.

The name of the album leads one to believe that there will be a second acoustic EP at some point in the future.  If they do decide to go this route, I hope the band steps a bit out of their comfort zone and tackles some of the harder/heavier songs in their catalog.  I would be particularly interested to hear "Coming For The Throne", "Darker Side of the Moon", and "Soldiers"...maybe even "Demon Fighter"... given the acoustic make-over, just to see where they decide to take the tracks.

Musically, this EP is extremely clean, with no squeaks and squawks from the acoustic guitars, and Ryan really gets the chance to showcase just how good of a guitar player he is.  That's one thing about an acoustic record that I love; your strengths and your weaknesses are really laid bare for the listener, without a lot of production tricks to cover up mistakes or musical deficiencies.  Likewise, Adrian's vocals are very strong and very clear, with no real backing vocals used anywhere on the record.  I'm guessing that this album was tracked and not just recorded as a single in-studio jam session, so there could be a good deal of cleaning up that was done here, but it doesn't bother me either way.  The quality of the final product is what matters, at least to me.  The band has nothing to "prove" to me with this set.

The packaging is very simplistic, with just a simple thank you list to the bigger contributors to this fan-funded effort, and a single black and white band photo under the clear disc tray.  My copy is autographed by the band (my scanner is down at the moment, so I had to snag this picture from the 'Net), and, yes, I was a campaign contributor.

All in all, this is a cool little set that I have played several dozen times already.  Will it become a long-laster for me?  Honestly, I doubt it, as acoustic albums don't do a ton for me unless there is new material on it, but I can see myself putting it in from time to time, much the same as I do with Alice In Chains' or Godsmack's acoustic efforts, or even Bon Jovi's, for that matter.  There is certainly nothing wrong with the performances here that would deter me from popping it in when the mood strikes.

Rating:  Taken for what it is, rock this at a really good 6.5.  Once the shine is off the humor of "Vegas Girl", it drops things for me just a bit, otherwise this EP would likely have reached crankable territory.  Still very much worth picking up, especially for fans of the band or for fans of acoustic rock in general.

Back To Reviews Index
Posted by arttieTHE1manparty at 7:51 PM