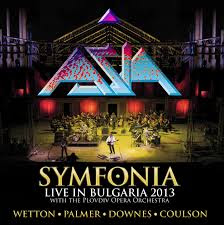 * Played with the Plovdiv Philharmonic Orchestra

Asia is one of those bands that started off on fire with their debut effort, and then continued to smolder for the rest of their iconic career, despite the fact that they never came even remotely close to duplicating the successes of their first record.  To that end, this live album, of which half is recorded with the Bulgarian Plovdiv Philharmonic Orchestra, leans heavily on the best-known tracks of the band, with four tracks culled from that self-titled debut, as well as the two hits from the band's second album, Alpha, also being included, along with a couple of more recent songs following the reunion of the classic line-up of the band.  As is to be expected following the legal wranglings surrounding the separation of the band into two different entities, no songs from the John Payne version of Asia are included here.

The album starts off with one of the band's classic hits off their debut record, as "Sole Survivor" intros the live set.  Immediately it is evident that the band is firing on all cylinders musically, as the track is exceptionally tight and Wetton's voice, while obviously huskier with the passage of time, is still powerful and comfortable throughout the range he chooses to use.  Sam Coulson's guitar lines are something I paid particularly close attention to here, as he has the unenviable task of trying to duplicate the tones and sounds of the legendary Steve Howe, but it should be noted that Coulson performs admirably throughout this record.  But one thing is missing here: the orchestra.  It is not until further and closer inspection of the album that it is apparent that the Plovdiv Philharmonic Orchestra doesn't join the band until the second half of the show.  This will likely be particularly disappointing to fans of only the best-known songs from this legendary band, as much of this first half is comprised of songs taken from the reunion years, starting with the Phoenix album from 2008, 2010's Omega effort, and one track from the 2012 album, XXX.  While all of these songs are performed with top-notch musicianship, especially when it comes to Downe's inimitable keyboard work, I kept finding myself wanting to skip forward to the real meat of the album, although I had my appetite whetted with the inclusion of "Days Like These" from the Now & Then best-of package, which I feel is one of the band's better tracks, following those first two classic efforts.

The orchestra joins the band for the second half of the show, and it is this section that will likely hold the most interest for casual, "only the hits" types of fans, as the majority of Asia's most well-known tracks are included here, including the band's biggest chart hits "Only Time Will Tell", "Don't Cry", "The Smile Has Left Your Eyes", "Wildest Dreams", and the band's signature track, "Heat Of The Moment".  The orchestra is relegated largely to background status on these songs, unlike the way many other band's have chosen to use orchestral sections, which was a bit of a let down for me, to be honest.  I was really hopeful more emphasis would be given to the strings and percussion from the orchestra, but that was not really the case.  There are a couple of exceptions to this observation, with on being on the acoustic ballad, "Heroine", which naturally lends itself to more orchestral involvement, and indeed the strings are far more evident here than elsewhere.  You can also hear the string contribution to "The Smile Has Left Your Eyes", and I enjoyed this musical enhancement...along with a very nicely played piano section...but I was still left wanting more, especially when the big rock movement portion of the song kicks in.  To say that I am not disappointed that the orchestra was not more involved would be dishonest, and I can't help but feel a bit let-down (although I'll stop short of calling myself mislead) regarding the album's title, cover art (which clearly features the orchestra on stage), and overarching suggestion that this is an "orchestral" effort.

There is some nice interaction between Wetton and the audience...he even speaks (or attempts to, I'm not sure) in some Polish at the outset of the concert, and he drops in some basic banter here and there.  Never a really flashy band in the live setting, this record is more about the music than showmanship.  Now, that being said, I do not have a copy of the DVD that goes along with this CD, so I cannot speak to that aspect of this particular show, but having seen Asia live once in the early 90's, I wouldn't be surprised if there is a whole lot of stand and sing/play from this band on the DVD.  Again, this band is about the music, not the show, anyway, and the addition of an orchestra usually only serves to ground a band that much further.

With the unfortunate and untimely passing of Wetton on January 31, 2017, this live release may very well be the last Asia album released.  It is too bad that Steve Howe was not a part of this show, which would have put all of the originals on what is likely the last live record we will ever hear from the band, but Coulson does a more than adequate job on guitar, and he is truly a talented player.  The addition of the orchestra is a nice touch, but I do wish it had been better utilized on more songs; the relative lack of orchestral emphasis is actually my biggest complaint about this record.  Despite leaving a couple of personal favorites off the set list, most notably, "Go" and "Voice of America", the song choice here is both logical and entertaining, and Symphonia is a nicely performed show, with a solid, clean recording that will leave fans, both new and old, with a top-of-their-game reminder of the greatness of this legendary prog rock band.

Rating:  Hitting all the high points and mixing in several tracks not likely known to casual fans, Symphonia is a solid live album, even if it doesn't quite live up to what I had hoped it would be.  Rock this effort at 6.5, only because I wanted so much more from the orchestra, and raise your glass to the loss of a legend.  RIP Mr. Wetton.

Posted by arttieTHE1manparty at 1:11 PM