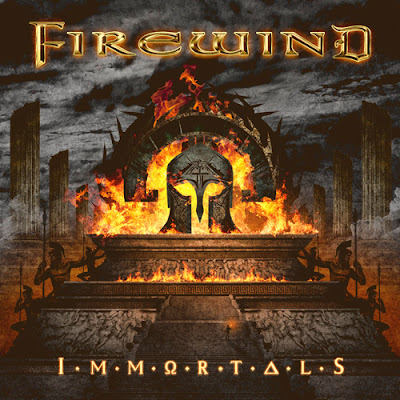 Greek power metallers, Firewide, return to the scene after a nearly five year hiatus as founder and guitar god, Gus G., was busy touring the world with Ozzy Osbourne and putting out solo records (both of which are fantastic, by the way).  There was actually some question about whether Firewind had breathed their last, but Gus G. insists it was always his plan to bring the band back together, and indeed the boys are back together on this newest release, Immortals.

The album opens with two melodic, yet string-melting tracks, in "Hands of Time" and "We Defy", both of which serve to put the listener on notice that Firewind is fully back and ready to reclaim their position at, or near, the top of the Euro-power metal scene.  One thing that will be immediately obvious is the new voice of the band, as Henning Base has stepped into the void left by Apollo Papathanasio.  Kelly Carpenter had been the touring vocalist for Firewind for the past couple of years, and many thought he would be the new album's voice, but I feel Base brings a style and power of his own to these songs (more on that in a bit) that I honestly don't think Carpenter would have incorporated.  I'm not sure of the reasons Carpenter was not used on this record, but the addition of Base is definitely a signature move, and his performance on these first two tracks, and the speedy, "We Defy", in particular, tell me that the right decision was made for the band.

"Ode To Leonidas" starts off with a spoken word intro, recalling some of the things Manowar has done in the past to varying degrees of success.  This effort is short enough, I suppose, but I still find such things to be more of a distraction than an addition to the song itself, and this intro is not the exception.  Once the lead-in is finished, however, we are treated to yet another hard-charging fret-burner from Gus G. and Company, with Base's vocals really taking on an edge that the band didn't employ often enough in the past, in my opinion.  The former lead vocalist for Brainstorm and Gamma Ray, among others, has a strong, passionate tenor that he masterfully controls throughout this record, but when he adds this bit of gruffness to his vocals, it really adds to the urgency of the track.

"Back On The Throne" is a great song that I feel really hints to Gus G.'s time touring with Ozzy, as the rhythm guitars carry a tone that is reminiscent of late 80's/early 90s material.  I could definitely do without the keyboard lead-in to the song, but it is short-lived and more of a nuisance than a real annoyance.  A big, soaring guitar solo is a prominent part of this track, and again, Base really unleashes the power of his vocals on this track, which is definitely one of my favorites here.

"Live And Die By The Sword" is the album's epic moment, starting with a nice acoustic guitar over the sound of a distant thunderstorm, then slowly building in power until Base's vocals lead the charge of the band, along with some nicely stacked, gang-shouted backing vocals, that work perfectly to compliment a rhythm that builds from a moderate gallop to a full-blown charge, especially during the blistering solo section.  Katsionis is given reign to add his own mini-keyboard solo amidst the flurry of Gus G.'s guitars, as well, again showcasing the epic nature of this song.

Rarely does the album allow the listener to catch his or her breath, but one truly shining moment on the record is the ballad, "Lady of 1000 Sorrows".  Incorporating some classic rock-sounding guitar tones in places, this power ballad sweeps and soars, especially when Base is given the chance to really hold onto a note and extend it out, especially on the closing chorus.

Without breaking the record down in complete song-by-song fashion, I feel that this is definitely one of the band's best efforts...probably seated right behind the huge The Premonition, which I still find to be breathtaking in places.  This record is right there, however, and as I have likely made obvious, I feel that Base's vocals make so much difference on this record.  I would love to hear him tackle the best cuts of the band's rather large catalog, especially on the more epic tracks that Firewind does so well.

The keyboards are still a bit more prominent than I prefer, but such is the Euro-power sound, and I have learned to accept them for what they are.  Besides, Katsionis is a truly accomplished player and brings a level of excitement and energy to the songs that more often than not boosts, rather than hinders, the overall sound.  I can't say the same for many keyboard players in the power metal scene.  And, while on the subject of musicians, I don't think Christo and Nunez are given enough love here, as they are often thought of as mere supporting players to Gus G.'s prodigious talent, but the rhythm section here is amazing and really builds a support structure that Gus would struggle to replicate.  Top notch performances all the way around.

Rating:  Sounding like they haven't missed a beat, crank this effort to a really, really solid 8!

Back To Reviews Index
Posted by arttieTHE1manparty at 12:31 PM