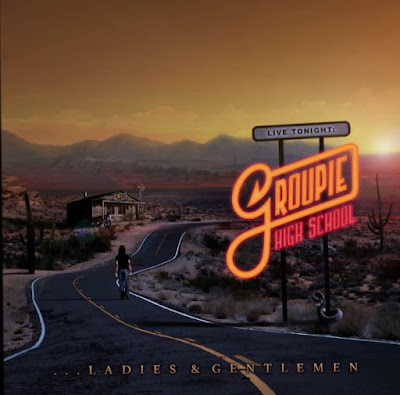 
Before I go any further on this review, I want to say this...it takes a LOT of cajones to get UFC ring announcer Michael Buffer to intro your EP when you are pretty much an unheard of band anywhere outside of your homeland of Finland.  And while we all know of my intense disdain for intros, I have to admit, I like the chutzpah it takes to go out and do something like that to get yourself noticed.  So, kudos to Groupie High School for taking a shot...but don't expect me to listen to it more than once.

Groupie High School is a band I know literally NOTHING about other than the fact that they are from Finland, and they like to rock hard, fast, and loud.  And by that, I mean they are seeking to tear your throat out through your eardrums!  Outside of the two very nicely done ballads, "Hard To Breathe" and album closer, "Navy Blue", these guys are balls-to-the-wall with sleazy, aggressive guitars, rumbling bass lines, and thunderous drums.  But what really sets them apart from so many other bands is the vocal approach that Olavi uses.  For the vast majority of his lower-range, mostly "verse" vocals, he employs an approach that reminds me a LOT of the type of vocals used by 80s New Wave bands like Simple Minds, which I think is just so very cool.  Why?  Because he doesn't sound like every other singer out there.  This is, again, particularly evident on the ballads, where Olavi's vocals carry an emotional quality not always felt with harder-edged, sleazy bands like Groupie High School.

Oddly, there are a couple of issues with this album, and they also revolve around the vocals.  First, Olavi sounds like he has a lot of trouble with his English enunciation.  After my first few spins, I could honestly only make out about every fifth or sixth word he was singing/screaming, and who knows if I was actually correct in guessing what he was saying (I usually start by going for the chorus).  However, this is a very minor issue, as with repeated listens I have been able to decipher quite a bit of what he is saying, and truthfully, I am usually rather forgiving of foreign bands who choose to sing in English.  The real issue is the recording of the vocals themselves.  Seriously, we are talking horrible engineering/recording of the vocals on three of the six songs here!  It sounds like Olavi was recorded in an echo chamber in places, there is so much reverb on his voice.  Everything sounds gang shouted, which can be cool on backing vocals, but on lead vocals it does NOT work at all.  And the thing is, it's not Olavi's voice that is the problem; as I mentioned previously, I actually really like his voice, especially the variance between his screams and those lower-end, New Wave-ish verse vocals I referred to.  I just wish they had been recorded better all the way throughout the record.

Outside of this vocal issue, which I do manage to get around, I think this band is definitely onto something.  I love the aggro-sleaze approach here...a lot...and the unique approach to the vocal style is refreshing.  Musically, on the faster numbers, such as the barn-burning "Chicks With The Flips", which is complemented by a Guns N Roses "Rocket Queen"-inspired porn soundtrack in the background, this album has a lot in common with the furious aggression of the seriously under-appreciated Sledgehammer Ledge, which is a dang good band to be compared to, as I absolutely love their demo and their album!  We're not talking musical clones by any stretch, but that angry edge and searing energy that Sledgehammer Ledge employs so well in their brand of sleazed-up metal is also evident here.  "Liquid Lunch" is another high energy romp that employs some excellent rhythm guitars and really allows Olavi to expand upon his range with a top-end scream that falls somewhere between Axl Rose and Dizzy Dean from Britney Fox.  It's also worth noting that I kept hearing the words "teenage wasteland" repeated in this song, and then the song ends with a keyboard line that sounds like it is straight out of The Who's "Baba O'Riley".  Check out the official video below.

The musically interesting, "This Is How We Say Goodbye", teases at being a slower song, with an intro riff that reminds me a bit of David Bowie's "China Girl", before the crushing drums and punchy rhythm guitars crash through that bit of musical nostalgia and blast this song into another full-throttle, angst-riddled rocker throughout the verses, then backing off into that quirky "China Doll" styled riff on the pre-chorus, before ramping things right back up again.  This uber-cool song is a perfect example of the band doing exactly what they want to do, not really concerning themselves with sounding like all of the other Euro-glam/sleaze bands out there, and bringing a uniqueness to the table that is sorely missing in a lot of the music of this style today.

I am so very anxious to hear what these guys come up with on their next effort now that they are getting some proper promotion and attention with Atomic Stuff.  I'm anticipating big things out of Oulu,Finland in the near future.  As for now, this is a really good EP that had the potential to be great with better production.  I would still encourage readers who like their glam/sleaze fast, loud, and nasty to track down these Finns.  I think you will agree they are onto something here.

Rating:  Definitely crank-worthy, I give this a 7, but with better engineering and production, we would have been looking at a 7.5 or even an 8.  Groupie High School is a band to keep an eye on.

Back To Reviews Index
Posted by arttieTHE1manparty at 7:43 PM