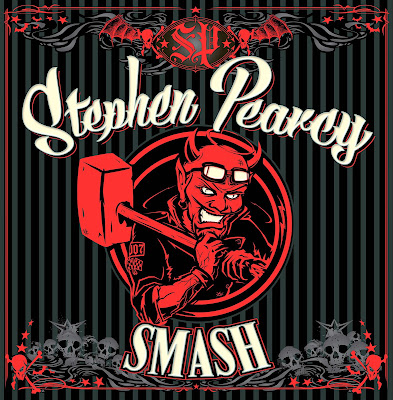 So...while Ratt (er, am I allowed to say that???) works out their legal situations about who's in, who's out, who can call their band what, and who can perform using what name, Stephen Pearcy decided to go out and record himself a new solo album.  Huh.  Imagine that....

Of course, Pearcy is not exclusively about Ratt, as he had a pretty killer side band in Arcade, and he's also dabbled in some other band projects with varying degrees of succ...no, no, I'm not gonna lie, they all pretty much sucked.  Vicious Delite...bad.  Vertex....horrible.  Then there were his solo efforts, of which only Social Intercourse really had any interest from me, although his iTunes release of 3 tracks bunched together as Sucker Punch were actually very good, although the album they were supposed to come from never surfaced that I am aware of.  But other than Arcade and a few nice solo efforts, most of Pearcy's Ratt-less musical endeavors have been pretty disappointing to me.  So, I wasn't really expecting a whole lot of anything from Smash when I was sent the album for review.

My attitude changed slightly when I saw that Beau Hill was once again involved in a Ratt-related effort, as that dude really helped the band define their sound on their first few records.  It's too bad Hill doesn't lend his considerable talents to the entire album, because if he had we might have gotten off to a better start with this record.  Why do I say that?  Quite simply, the worst song on the record is likely the lead-off song on this disc!  Seriously, I put on "I Know I'm Crazy", and I instantly agreed, as only a crazy man would have led off the album with this mid-tempo schlockfest that is, for lack of a better term, rather boring.  I mean it.  There isn't a ton of life to the song at all.  Pearcy sounds good, no doubt, and the music isn't necessarily bad, there's just no real hook to it and very little life at all, with the band sounding like its on cruise control.  If I were to tell you my mind didn't almost instantly go into Here We Go Again mode, I'd be lying.

I'm glad I didn't let that first track shape my overall opinion of this record, because starting with "Ten Miles Wide", things definitely pick up for most of the record.  Definitely more uptempo and catchier than the album's opening track, "Ten Miles Wide" finds Pearcy treading fairly close to the Ratt tracks with the guitar tone and nice hook that reminds me so much of the better material Ratt recorded for Detonator, Ratt, and Infestation.  Vocally, as usual, Pearcy sounds fantastic on the record, and I will be interested to hear how he sounds if/when he takes these new songs out live.  The backing vocals are also strong here, lending support to that sassy snarl that 80s fans know so well, and there is some pretty cool guitar work from Ferentinos here on the solo.  Definitely one of the best tracks on the record.  "Shut Down Baby" is a bit thicker, a bit more bottom-ended in its sound, maybe even a bit Zeppelinis with thebluesy romp of the rhythm and bass guitars, as this song carries one of those hooks that instantly pulls the listener in for repeated spins of the song.

"Dead Roses" has such a familiar, sleazy rhythm line to it I SWEAR this song could have been an LA Guns song and if it was Phil Lewis on vocals instead of Pearcy, no one would be the wiser.  Pearcy definitely pumps up the attitude for this track and he wears it well. That rhythm line I mentioned before runs entirely throughout the track and just embeds itself in your brain, making it nearly impossible to transition into the equally sleazy...but a bit less greasy..."Lollipop".  A snappy, sassy number with a fairly juvenile attitude about it, "Lollipop" is catchy as heck and has a cool bass line that runs throughout the track, and another slick solo from Ferentinos.  There are a couple of F*bombs on these two tracks, which is totally unnecessary, but I can deal with that, I guess.

"Hit Me With Your Bullet" is another catchy, Ratt-esque track that long time fans are likely to grab hold of on the first spin through the record, as is the next track, "Rain", which is also a strong contender for the best song on the record.  I have to hand it to Ferentinos and Hagar for their work on rhythm guitars on this record, as Smash has some really good work in that department scattered all throughout the record.

"Want Too Much", which is one of the heaviest moments on the record, is actually a bit of a miss for me, as it doesn't really carry that sleazy-yet-still-melodic sound that the rest of the record does. "What Do You Think" goes the other direction with an all-acoustic number that has a roots-rock, maybe even slightly country feel to it.  While I actually think its a pretty cool, catchy number, I can believe that there are many Ratt/Arcade fans that are going to instantly reach for the skip button on this one.

"Jamie" jumps headlong back into Ratt mode, with yet another one of the best songs on the record.  In fact, "Jamie" is probably my favorite overall track and I think you could slip it into any of the last three or four Ratt records and no one would be the wiser that it's a Pearcy solo track.  Heck, you could even drop it onto Invasion Of Your Privacy and only long-time fans of the band would know that something was amiss.  It really is that good and that reminiscent of top-of-the-barrell Ratt material.  Love this song!

"I Can't Take It" is another Ratt-styled song, albeit from a later era of the band.  This is the song that Hill contributed his talents to, and it is pretty easy to hear his fingerprints all over this catchy, hooky rocker with that subtle pop-tinge to it that Hill dropped onto some of his most well-known work.  Fun and easy to sing along to, this track has summer written all over it and would have definitely been a rock radio staple back in the heyday of the band.

"Passion Infinity" is another hard rocking number with an interesting time change between the verses and the choruses, but it isn't really all that memorable.  Not bad, just not an instant repeater.

The album closes with "Summer's End" which is a bluesy, Zeppelin-inspired ballad that really works well.  I could see where a band like Great White or Kingdom Come might have attempted a track like this, but it was completely out of left field for me to hear on a record like Smash.  Despite that, Pearcy sounds right at home here, which surprised me, to be honest.  There is a stark quality to his vocals here that is not commonly found on Ratt, or even Arcade, songs of the past, and while a bit of vocal weakness shows in a couple of spots, it actually adds to the overall feel of this ballad.  I really wish it hadn't been buried at the end of the record, to be honest, as there are at least three songs I have to wade through to get to this really good piece of music.  A nice surprise, indeed, for those who stick it out to the end and don't just program all of the most Ratt-centric tracks onto repeat.  Easily a top five moment on the album for me.

The production has been complained about by a lot of people, but I have to wonder if all they had heard were the videos that had been put out for a few of these songs, as I have no real complaints about the mix or overall feel of the album.  There are no glaring imbalances or muddiness anywhere, and even though there are a couple of definite filler tracks here, there is nothing wrong with the flow of the album, to speak of, and the overall groove of the record is solid.  Maybe after 35 years of hard rock and metal my ears are starting to lose a bit of sensitivity in some areas (I don't think they have, but who knows?), but I have no complaints about the sound quality here.  It would have been fun, however, to hear what Beau Hill would have done with the full record, however, but maybe that will happen on the next (knock on wood) Ratt record.

Rating:  It's not completely Ratt, and it's not really Arcade, but it's definitely solid hard-edged rock, and Pearcy hasn't sounded better on a solo effort...ever.  Crank this to 7, with a couple of forgettable tracks holding it back slightly.

Back To Reviews Index
Posted by arttieTHE1manparty at 5:24 PM