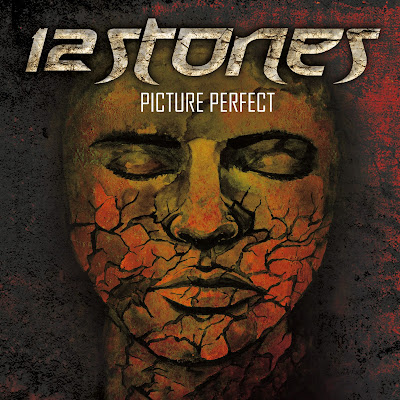 I have to admit that this album kind of snuck up on me.  I had no idea that 12 Stones was still together, let alone releasing new music!  Released mid-summer, Picture Perfect is the first new 12 Stones record in almost five years, so I guess I won't be too hard on myself for not knowing it was out there.

For the uninitiated, 12 Stones has been together for the better part of two decades now, although only vocalist McCoy and guitarist, Weaver, are the only founding members who remain.  Now five albums deep in their career, McCoy and Weaver have definitely developed a "12 Stones" sound, with a combination of hard-edged, buzzsaw guitars, catchy-yet-edgy songs, and McCoy's raspy, half-sung-half-shouted vocals that are pretty much instantly identifiable and really serve to set the band apart from so many other post-grunge modern rock bands on the radio today.  At least for me, it is pretty obvious when I hear a 12 Stones song...and that's a good thing.

Picture Perfect continues in that trend and sounds, well, very much like the previous 12 Stones records.  There are several songs here that, had they been released 8-10 years ago, would probably be all over modern rock radio right now.  The album opens in blistering fashion, with the rapid fire, sub-3 minute scorcher, "The Killer", which is immediately reminiscent of where the band was when last they checked in with us on Beneath The Scars, feeling very much like that album's singles "Bulletproof" and "World's Collide".  Another top-notch rocker, "Time", could also fall into that category of familiar styles and sounds as well, relying heavily on a hard-charging riff and a chunky rhythm to set the tone, with a pretty cool bridge incorporated into the track as well.  This could well be my favorite track on the record, although "Blessing", which an absolutely scorching solo from Weaver and some big, thick riffage, is also a contender for that title.

The band does throw the listener a few curveballs along with the familiar, however, and it really gives Picture Perfect more of a diverse feeling.  For example, "Lerlene" sounds so much like The Wallflowers that...well...I seriously wondered if it was The Wallflowers the first couple of times I heard it.  Seriously, if you don't think McCoy and Weaver were sitting around listening to that band's Bringing Down The Horse album in the studio, you are nuts!  And the thing is...I love this track, largely because it is so different and so out of the band's wheelhouse.  "Voodoo Doll" has a funky vibe to it, which is pretty cool, and doesn't feel like anything I can recall 12 Stones doing in the past.  It feels more like a Black Stone Cherry type of song than a 12 Stones track, but I like the thick chords used here and the dynamic changes that McCoy uses on his vocals.  "How Long", which is one of my three faves here, is the most "radio friendly" of the tracks here, and it comes off a bit like a 3 Doors Down or maybe a Puddle Of Mudd styled track, but it is definitely a good one.  If I had my way, I would have made "How Long" the last of the new tracks here, and bumped up the acoustic ballad, "Hello Suicide" to track nine.  It would have blended into the two re-recordings better and also left fans on a high-energy note regarding the new material.

Speaking of "Hello Suicide", this is a particularly dark, yet hauntingly beautiful, song that finds McCoy singing about struggling with depression and pain.  Nothing like anything I have heard from the band before, this track really emphasizes McCoy's singing ability, which is not always utilized on the harder, faster songs.  While he has a somewhat limited range, the emotion he pours into this song is almost tangible as he repeatedly sings about having "nothing left to lose" as he implores suicide to "please don't take your time stealing this cold life from me".

The album closes with a couple of re-recordings of two of the band's biggest songs, "Anthem For The Underdog" and "We Are One".  Both come off as more raw and somewhat more aggressive than the originals, and "We Are One", especially, feels like a live, in-studio effort.  There are a couple of minor off-key moments vocally, but rather than detract from the song, these "real" spots actually add something for me.  I'm wondering if the band lost some of the rights to their back catalog and re-recorded these songs to establish ownership of these versions, which sometimes happens (see the review for Smile Empty Soul's Shapeshifter album as an example of this).

The packaging here is relatively simple, which is common with Cleopatra releases.  There are no lyrics included, but McCoy is pretty easy to understand, so this isn't an issue.  A single band photo (featuring four people, even though only three are listed as "band members" now) is found on the inside of the cover, along with writing credits and extremely minor production notes.  Speaking of production, the mixing and engineering here is very good, with no muddiness or sound quality issues to take note of, and there is a really good bottom end throughout the mix, giving the songs a heavy, chunky feel.

Is this my favorite 12 Stones record?  Tough to say, but it is in the conversation, especially with the diversity.  Is it album of the year?  No, not by any stretch, but it is definitely enjoyable and one I have gone back to a couple of times since first writing this review.  My kids really like it, and with 12 Stones positive lyrical stance ("Hello Suicide" being the lone possible exception), I don't have any concerns with them listening to it, either.  Definitely a solid return for the veteran rockers.  Hopefully we don't have to wait five years between albums again.