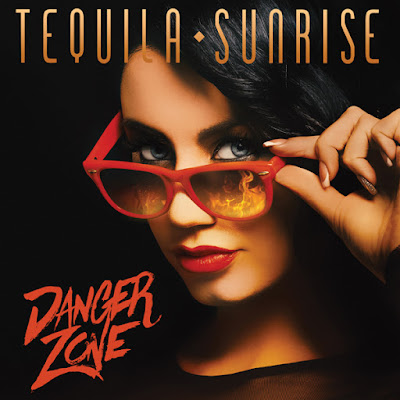 Tequila Sunrise is a new Spanish band that has a solid grip on the 80s hair metal sound, combining elements of Winger, Dokken, and even bands like Danger Danger and, in a few places, Mr. Big or 80s KISS (mostly in some of the song structures).

The album kicks off in a near speed metal frenzy of guitar flash and flury, and I was seriously second-guessing the type of band I thought I was reviewing here!  Seriously, there is some note density on the intro to "Day By Day", and even more impressive is the clean way in which these guitars are played.  A similarly driving rhythm really kicks this song into high gear as Tequila Sunrise comes out all guns blazing, setting quite the tone for the album.

"My Way Or The Highway" would have been the radio hit for the band back in the 80s, as it has just enough pop to the song structure that I think it would have crossed over into Top 40 territory.  Highly melodic with a catchy guitar hook and big, "whoa"-styled backing vocals, "My Way..." pays definite homage to this band's days-gone-by heroes.  The guitar heroics continue here, as there is a tasty little solo thrown in before the bridge that fits perfectly with the melodic nature of the track.  I really wish I had a full CD to review here, rather than this digital copy, as I would love to give proper credit to the axe-slingers and their solo works, as they are top notch.

"Bad Side Of Love" has a sleazier, bump-and-grind type of rhythm, and Cortes vocals work particularly well here, not sounding quite as muffled by the production.  A bit edgy, a bit nasty, this mid-tempo track just kind of smolders along, building to yet another big, soulful solo, and a nice little vocal bridge leading into the final chorus.

"Stay On The Wild Side" has a definite Mr. Big-collides-with-Bon Jovi feel to it, especially in the opening riffing, the shuffling groove set up by Acosta and Santos, and the nice, big backing vocals on the chorus sections.  This song is particularly catchy and fun, and is definitely one of my two or three favorites here, really giving me a nostalgic feel with the way the song is structured and performed.  I'm not sure who is doing the solos on this song, but they sound like they are being traded off between Blein and Sanchez-Robles, and there is some seriously fast string bending going on here!  The guys really sound like they are enjoying themselves here, and I'm betting this would be a great song to catch live!

The title track is another excellent rocker, with Cortes managing to rise above some of the production limitations of the record and really expand his range, pulling off some nice top-end screams.  The gang-shouted "Danger Zone!" chorus is fun, and the guitar work is top notch, as well.

"She" is another Mr. Big-esque rocker that revs you up just before transitioning into the highly melodic "Carry On", which carries a lot of the sounds and stylings of today's melodic rockers.  The cool thing is that it slots in nicely here, not sticking out like a sore thumb or anything.  Yet again, we are treated to some nice guitar acrobatics, albeit a bit more restrained than in some of the other spots on the record.

"Risk It All" doesn't hold such guitar reservations, as there are all sorts of tricks and techniques employed on this high-energy rocker.  Once again, this is one of those songs that has a solid grasp on the 80s era as far as structure goes, but it has a bit more polish...and less rasp or grit...on the vocals than a lot of the 80s bands did.  Cortes definitely reminds me of someone with his vocal approach here (and throughout the album, really), but I'll be danged if I can put a finger on who he sounds like specifically.  Maybe it will come to me later.

The album closes with the very cliche-sounding "Fallen Angels", but it manages to close the album on a very solid note, not falling into the same-old-same-old trap that the well-worn title would seem to threaten.  One final time we get to hear the guitar wizardry of Sanchez-Robles and Blein, and Cortes is definitely well within his wheelhouse vocally here, sounding comfortable and in command.

I only have one real complaint about the album, and that is the production.  The vocal production here, specifically, is less-than-stellar, sounding a bit muffled in several places.  I really think the album would have benefited from having the lead vocals brightened up a bit in several songs, which I think would have given them that much more bounce and life.

All in all, I found myself really enjoying this record, and the talent is obviously there in large quantities, especially in the guitars and the vocals.  While the songwriting may come off as a bit cliched to many people, I found it to be a really fun nostalgia trip without the songs all sounding like rehashes of 80s classics.  In all honesty, I think this band could have been a player in the 80s/early 90s, as they have a definite feel for the songwriting, the structure, and the performances of that era.  Here's hoping for more from these talented Spaniards in the very near future!

Rating:  A definite cranker here, checking in at 8!

Back To Reviews Index
Posted by arttieTHE1manparty at 10:47 AM