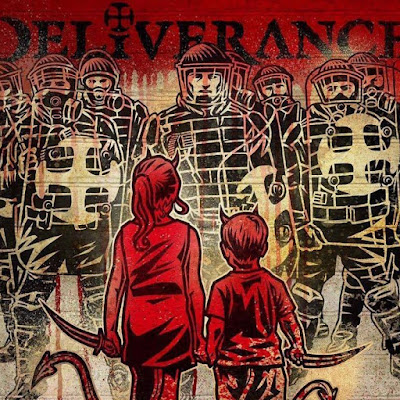 First off, let me say that I am not 100% certain of the track order on this album, as I have seen it in print like I have it listed above, but then the downloads came with a completely different order outside of tracks 1 and 2.  So, if I discover that my listing is in error, I will change it as soon as I have the physical CD in my hands, which should be some time in early 2018.

Regardless of the tracking order, it is safe to say that this is easily the heaviest and fastest record that the Christian thrash metal pioneers have recorded in twenty years or more...perhaps going all the way back to the debut record, or even the Greetings Of Death demo!  While 2013's excellent return, Hear What I Say! was a mixture of the thrashier parts of Deliverance melded with the more melodic approaches of albums like Learn and Stay Of Execution, this new record makes no bones about what it is, which is full-on thrash.  Referred to by some as Deliverance's Reign In Blood, a direct nod to the Slayer album that many people put at-or-near-the-top of the thrash metal heap as far as sheer ferocity and brutality goes, Deliverance's new record definitely has turned the band back a few chapters to the type of speed and aggression they played with when they first burst upon the scene.

For more than twenty years, it seems every fan of the band continually poses the question, "when will you do another real thrash album?"  Seemingly everyone wants a Weapons Of Our Warfare, Pt. II, or another What A Joke.  With The Subversive Kind, the band not only returns to the musical roots of Deliverance, it does so with a virtual who's who of Christian thrash history now in the band.  Besides founding vocalist and rhythm guitar master, Jimmy P Brown, II, this new incarnation of Deliverance features sharp bursts of machine gun drumming from Crucified drummer, Jim Chaffin, rumbling bass lines from Victor Macias (Tourniquet), and blistering lead guitar from Glenn Rogers (Vengeance Rising/Deliverance)...and guest lead work from Christian punk/thrash crossover legend, Greg Minier of the Crucified/Minier/Applehead!  If ever an album had a pedigree for success, it would seem to be The Subversive Kind.

Musically, this album, as I have mentioned is extremely fast for the most part, but each of these eight songs also features multiple tempo changes within the song itself, creating some unique and interesting dynamics.  You can hear the individual contributions, as well, as several songs feature something akin to a hardcore breakdown in places, but not at the expense of a blistering guitar solo, which every song here features.  No, this is not nu-metal or metalcore, this is pure thrash at its finest.

Jimmy's voice takes on a much more gruff, barked style on this record than on previous efforts.  Gone are the high, soaring screams of Weapons..., What A Joke, or even Stay Of Execution.  To be honest, I'm perfectly fine, as the vocals laid down by Jimmy here fit the aggressive nature of the songs which are far more thrash metal and less speed metal than, say Weapons... was.  With so many of the songs here coming off as rather angry with the observations Jimmy is making, this harsher vocal approach fits the tone perfectly and brings a further fierceness to each of these songs.

Unlike their first few records, Deliverance is not out to beat you over the head with chapter and verse theology, but that does not mean that they have slid in their faith or their stances on touchstone social issues in the world today.  Take for example, "Concept Of The Other", which is about people who use false Christian interpretations to justify prejudice and hatred, with Jimmy singing/barking, "They seem to think we serve the same God, All rolling out their mats or sealed in their pods.  If only I've seen Christ in the way some live, The more we push and take, the more we make them give."

If pushed to choose a favorite track or two, it would be a fairly difficult task.  "Center Of It All", a track about being self-absorbed and drawing all attention to oneself, is an absolute mosh pit churner, featuring some serious speed and is a track that really recalls "Greetings Of Death" from the debut record as far as tempo and approach.  Its awesome to hear Minier rip into the solo on this track, as well, with the middle section slowing down a bit, with a nice thick groove setting the stage for Greg to go to town.  "Concept Of The Other" has some of the best lyrics on the album (see above), and I love the tempo change that is dropped after the second chorus, which allows Glenn to lay down a wicked solo before Chaffin kickstarts the track back into hyperdrive.  The albums' lead single, "The Black Hand" has a definite Weapons Of Our Warfare feel to it, particularly in the guitars, which is very cool, and "Listen Closely" does a nice job of combining the debut record's speed with some Stay Of Execution-styled phrasing used in the vocals.  But if it came right down to it, I'd have to say "The Fold" challenges "Concept Of The Other" for my favorite track here, and is a brilliant way to close a fantastic, breathtaking album, as a bit of singing returns to Jimmy's vocals, and the full-throttle riffing of the rhythm guitars drag the listener ever-so-slightly back to Weapons... one final time.  I also really like the gang-shouted sections, one right before an absolutely blistering solo leads the track into the final chorus, and one just before the outro of the song.  Cool, cool stuff.

If there are any drawbacks to this album, it would seem to me that clocking in at just 31 minutes is going to be a sticking point for many people.  That being said, let me assuage the angst of some of you by telling you it is a fast, furious, brutal, thrashy 31 minutes that is among some of the heaviest thrash metal I've ever feasted my ears upon in years.  Truth be told...I don't know if I could survive more than 31 minutes in a single sitting!

Rating:  Starting off 2018 with a crankfest!  Find something to hold onto and crank this up to 8!  The Mighty D is back!

Back To Reviews Index
Posted by arttieTHE1manparty at 7:50 PM