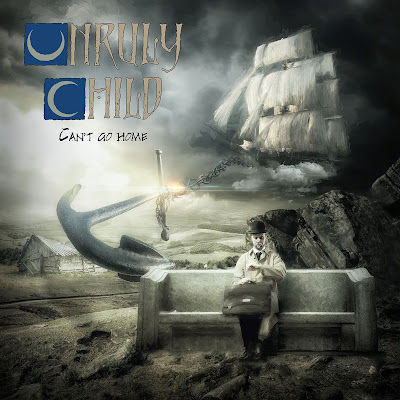 Unruly Child returns for their sixth proper studio album (along with one demos collection, 2002's The Basement).  All of the original players from the stellar 1992 self-titled debut return once again, so I was particularly excited to give this one a spin, as I have enjoyed...to varying degrees...everything this incarnation of the band has put out.

The album starts off with the led single, "The Only One".  Catchy right out of the gates, this track is a bit more directly a poppy-AOR track than a true melodic rocker, at least to my ears.  Free's vocals are still strong, and there's enough guitar-vs-keyboard tradeoff to keep me interested, but I can't help but hear bits of Fleetwood Mac's '77 classic "Go Your Own Way" in the vocals and the structure, which is not a good thing for me (can't stand Fleetwood Mac...sorry...hate me...).  Still, this isn't a bad track, and the Gowdy solo here is a tasty bit of guitar goodness, so the album seems to be off to a decent start.  Check it out below...

Things pick up in a big way for me with the darker, heavier, chunkier, "Four Eleven", as in having the 4-1-1 on someone.  Now this is more like it!  There are still plenty of layered vocals and some interesting musical ideas mixed in between the chorus sections, and a cool guitar solo from Gowdy really hearkens back to that debut record for me that I still hold in amazingly high regard (heck, I used a song from that debut album in my wedding!).  The keyboards are still present but in much more of a supporting role, and Free is particularly powerful in how she extends her exit from the final chorus.  Great stuff here.

"Driving Into The Future" brightens things back up a bit, but remains firmly in melodic rock territory.  Gowdy delivers another big, soaring solo, and Free adds a bit of rasp to her vocals here that again send me back to that first album. "Get On Top" scales the tempo back for the verse sections before building up a bit on the chorus sections.  This change in tempo is interesting and well-played, but the chorus itself finds itself in odd territory, somewhere between catchy and annoying.  Its a simple three-note progression on the three words of the chorus, and it is definitely is singable and catchy, but something about the tone and pitch of those three words just about grates on my brain after several listens.  I don't skip it because...well, I can't!  The rest of the vocal work from Free here is really strong, and Gowdy has some cool guitar work here, but if there was some way to take the edge off that "get on top!" portion of the chorus, I would gladly welcome suggestions.

"See If She Floats", drifts back into solid mid-tempo goodness, with Gowdy beefing up the verse sections, while simultaneously letting the chorus sections remain a bit more open, utilizing acoustic guitars and softer keyboard undertones.  It reminds me of some of my favorite mid-tempo moments from The Storm's debut effort, which I also hold in very high esteem.  Good stuff, even if it isn't 100% what I anticipate from Unruly Child.

"She Can't Go Home" is the album's ballad moment, although it isn't a proper, lighter-in-the-air power ballad, but more of a slower-mid-tempo number that derives a lot of it's "softness" from the sentimentality of the lyrics.  The guitar riffs are simple in the verse sections, and even in the chorus, really, although there is some nice punch in the bridge section, giving the song a bit of a build up before it slides back down into the emotive chorus supported by some excellent backing vocals.

Returning to that self-titled debut once again, "Point Of View" reminds me a LOT of "On The Rise" in the way it's structured, but the instrumentation is different enough that it isn't a blatant rip-off.  The tempo is a definite pick-up from the last couple of tracks and its harder-edged nature gives the album a bit of a momentum boost heading into the final leg of the record.   Gowdy again delivers several nice, meaty guitar chunks to chew on, and the supporting vocals here are as powerful as anywhere else on the record.  The same can be said of the next two tracks, "Ice Cold Sunshine" and "When Love Was Here", both of which have MASSIVE layers of backing vocals that actually threaten to overpower the strong leads from Free.  "...Sunshine" intros with a futuristic sounding computer voice giving the listener instructions before it slips into that comfortable mid-tempo pace that so much of this record...and, really, much of the best Unruly Child material...finds itself settling into.  Gowdy's guitars keep this track from becoming too airy or fluffy, which could be a definite possibility with the way these backing vocals are stacked up sky high.  The same can be said for "When Love Was Here", which again lays on the saccharine in the backing vocal area, but a nice bass line and some nice supporting work from Allison on keys on a track where Gowdy's guitar isn't the central instrument.

"Sunlit Sky" finds the band in 70s prog territory, which is something they actually pull off very well.  Starting with a slowly building intro, the track is really driven by the progressive drum patterns and throbbing bass line, along with more Allison keyboard wiazrdry (sounds like he's rocking a classic Hammond in a couple of spots), and perfectly 70s-inspired backing vocals that sound like they were ripped right out of the Styx playbook.  I like the use of this track to act as a kind of change of pace to the rest of the record, but I'm not sure I could handle an entire album of this style of extremely-retro rock, no matter how well it's performed.

The album closes with another rocker in "Someday, Somehow".  Gowdy's guitars and Free's punchy vocals give a real boost to the rather repetitive and unimaginative chorus which gives me get the feeling that this may have been more of an add-on track than anything else here.  There's a definite clap-along quality to the track, to be sure, and the uptempo attitude is fun, but the fake crowd noise (What the heck is that doing in there?  Am I supposed to believe this is a live track?) is a definite turn-off for me.  My five-year-old loves the song, however, and as I said before, it has a catchiness to it that is impossible to deny.

As with so many Frontiers releases, the quality of the mix and production is going to be largely in the ear of the listener.  I like the way the album is produced, personally, as I think it is rather crisp with no obvious muddiness or instrumental domination, but I know some people don't think there's enough separation between the highs and lows in the mix.  Maybe my nearly 50-year-old ears don't have the EQ quality they once had, but I'm not hearing the flaws that some do, and there is definitely nothing here that makes me mark this album down quality-wise.

Rating:  Not the best record in their catalog, but probably Top 3 and still crankable.  Give "Can't Go Home" a 7.5

Back To Reviews Index
Posted by arttieTHE1manparty at 12:05 PM