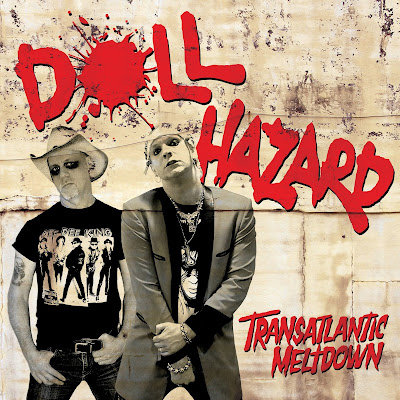 The miracle of the Internet has allowed for so many great things to come into being.  And while a lot of people may say that a modern sleaze-punk album may not qualify as a "great thing", fans of the genre would disagree and point to this collaboration between Chris Damien Doll and Sandy Hazard as an example of what greatness truly sounds like.  And I would be one of those in the final group...

4500 miles is a long distance to be separated by when you are working with your "band", but that is exactly what Doll and Hazard were faced with when putting together this record.  Regardless of the distance, however, the two managed to pull off what should be pointed to as a modern standard for the sleaze-punk genre.  Two years in the making, Transatlantic Meltdown takes the best part of the men's main gigs, Suicide Bombers and Dirtbag Republic, respectively, and meld them into something even grimier and grittier, dripping with snot, spit, sass, blood, and booze.

The Canada-Meets-Norway duo kicks off the disc with a jacked up Faster Pussycat-styled sleaze/punk number in "Cat's Got Your Tongue", which utilizes mostly drums and bass to drive the verse sections, while Doll keeps his guitars in reserve for the chorus parts, save for the lead-in riffage, a couple of buzzsaw interjections here and there on the verses, and a big string-bending solo between the second and third chorus sections.  I really like the sparse nature of the verse sections here, as it adds that much more energy to the chorus parts.

The two take turns on the microphone as lead snarlers, and both work well. with Hazard being the lower-ranged, snarlier Gene Simmons to Doll's higher-ranged, sleazier Pual Stanley, if you want to break it down in something of a relatable fashion.  Hazard is at his best on the sassy, punked-up "Rock N Roll Prostitute", where he is supported by a seriously hard-charging guitar riff and simple-yet-solid drum line that feeds directly into the angst-filled shout-along chorus of "I'm just a rock n roll prostitute!"  "Walk On Water" is another stand-out with a big guitar solo melting its way through the sludginess of track, with Hazard's barked vocals reminding me quite a bit of those used by Zodiac Mindwarp on their hit, "Prime Mover".

Doll more than holds his own in the vocals department here, with my two faves from him being "21 Grams (Off My Shoulders)" and "Fire Gasoline", which are both high speed affairs, with a lot of the sleazy attitude of the Suicide Bombers incorporated, albeit at a higher rate of speed than several of the Bombers songs.  Sounding like Faster Pussycat on steroids, "Fire Gasoline" is an incredibly catchy song with some nice rockabilly guitar work for the main parts of the song, along with a Sunset Stip styled solo thrown into the mix.

My favorite track here would be fairly hard to pin down, although I have to admit to hitting repeat on "No Valentine Cards" more than any other song here.  This punky anti-love song is just so dang much fun to listen to, is insanely catchy, and the lyrics about the teasing vixen that is the subject of this track perfectly sum up the attitude of the track.  The two-man gang chorus chant of "no Valentine cards" works absolutely perfectly with the rhythm of the track, and the brief rip of a guitar solo has enough sass and grit to grab you by the ears and plant your butt back in the seat you may have found yourself dancing out of.  The title track, "Transatlantic Meltdown" is a contender, as well, with its frantic pace and "haven't I heard this before" catchiness, along with its big "whooa oh oh" backing vocals, and jangly solo.  And, the sudden car-hits-wall change in pace and style that is "Doghouse" absolutely has to be mentioned in the favorites here, as there is no way the listener can't feel slapped in the face by the piano-laced, smokey barroom two-step approach, and yet still keep begging for more because it is so well-executed musically.  Nothing before and nothing after this song gives you any inkling of its inclusion, yet it is so perfectly placed and performed that I find myself drawn back to it time after time.  Excellent work right there, no question.  Absolutely love it.

"You're In My Head" is a fun track, if a bit repetitive in the chorus, and it has some of the cleanest guitar playing on the entire record, sounding a bit like Hanoi Rocks to me.  The album's closer, "Sci-Fi Child" is a last blast of speed, and while it is a good song, it is probably my least favorite track here; it just doesn't grab me like the rest of the material here, but it does manage to squeeze one more nice guitar solo out of Doll and finds Hazard absolutely attempting to kick his way through his drum kit.  It says something to me that the weakest track on this album would serve as one of the better tracks on other records.

Not enough can be said about the musical contributions of both men here, as I would imagine it has to be hard to match up musical styles and approaches without ever getting the opportunity to sit down in the studio with your recording partner.  Somehow the two manage to make it work, however, and the sleaze world is all the better for it, as this is one excellent album that I can't seem to pry out of rotation in my CD player.  The same can be said of the production, which is extremely good considering the way this thing was put together and the style of music it is working with.

As a fan of both bands, I was a bit concerned about what would happen when the two collided.  Turns out I didn't need to worry at all.  Doll Hazard is an absolutely must-hear for fans of the sleaze-punk genre, and the incorporation of the men's influences and respective bands has created an album that will be hard to match for just about any band who runs on the sleazier, dirtier side of rock n roll.