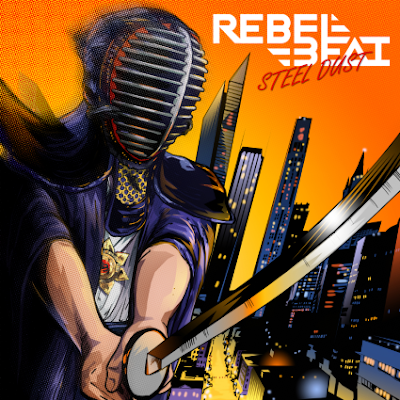 Hailing from Russia, Rebel Beat is a modern rock band that draws heavily from bands such as Linkin Park, Limp Bizkit, and even some Deftones in places. along with the most electronic moments of a newer band like Red, for most of the album, with doses of Red Hot Chili Peppers thrown into the mix.  While that may sound like an interesting mix, I'm hear to warn you, not all is as it might seem on Steel Dust, the debut album from this quintet.

The album starts off decently with "I'm The Law" as the band treads in familiar sounding territory, with the Linkin Park comparisons coming to the forefront almost immediately, with the industrial guitar approach and programmed elements laying a foundation for vocals that vary from rapped to sung.  There isn't anything that is ground-breaking here, and to be honest, this style is starting to become more and more dated sounding, but the song itself isn't bad, and the musical performances are decent.  "Swinging Around" is easily one of the catchiest songs on the album, and I would actually venture so far as to say I like it, although the rappish vocals do grate on my nerves a bit.  The music is interesting, however, with some hints of 90s alternative thrown in with the nu-metal style and the programmed elements.  "Melody" might be the most complete song on the record, and it is one that I could honestly hear getting serious rotation on modern rock radio, as it is the one that steers the hardest away from the rap-rock vocals, and uses the most aggressive riffing and drumming on the record.  Heck, I'll go so far as to say I like this song for what it is, and I think an entire record of this style of rock would be one that would likely sell fairly well.  Sadly, there isn't another moment on this entire record that matches this one as far as quality goes, and it's not really all that close....as in pretty much everything else here is just plain not good.

Oh, sure, there are hints of okayness in a couple of places.  "Red Rock" is a pretty good rocker, and the military-barked "left, right!" is a cool touch that is thrown into the mix, and the title track has a pretty decent bass line for an intro, and Vozvyshaev spends more time singing here than rapping, which is good.  However, there are few Fred Durst moments on parts of the verses, which is highly annoying, and the song lacks anything of any real musical value.

"Ferguson" is so nu-metal/hip hop that I can't even stomach it...which is odd, considering how bland it is, overall.  Part Rage Against The Machine, part Limp Bizkit, all garbage, this track is just mind-numbingly boring as these Russians try to make a political statement about an American incident.  Yawn. The police sirens in the background do nothing for the track, and the guitars are mundane and repetitive, with no real variation in tempo or tone, and absolutely nothing melodic about them.  Moving on...

"Rain Check" tries to jump-start the album again, but its modern-edged guitars and attitude actually comes across as rather tired and derivative.  Rather than incorporate something cool like, I don't know, an actual guitar solo, the song features several spots of electronic scratching (do they still call it scratching?) and programming that just suck the life out what could have possibly, at one time, been a semi-decent song.  And I don't know what the heck is going on with album-proper closer, "Braindown", as it uses 80s hip-hop beats...as in the programmed drums sound like something Sugarhill Gang or Grandmaster Flash might have used...to try to prop up more droning guitar riffing and programming that by this point have me seriously questioning why I haven't just shut this thing off already.

The two live tracks here are pointless inclusions here, unless the band was just trying to show that they can sound every bit as boring live as they do on record.  At least the drumming sounds live on the live tracks, and the guitars have more bite to them than they do on the majority of the main album.  Vozvyshaev sounds fairly strained on the singing portions of the songs, particularly on "Dead President", and the backing vocals are out of key with the lead vocals, which just becomes a brain-ache.  The self-titled live track is absolutely horrid and is just a bunch of Dr. Seuss-sounding lyrical nonsense verses over the top of a bunch of random electronic noises, all leading to the big chorus of "Rebel Beat Rebel Beat, Rebel Rebel Rebel Beat", or some such nonsense...followed by acoustic guitars and some more Red Hot Chili Peppers-inspired vocals before we are treated to the inane chorus one more time.  My God why am I still listening to this?!

What blows my mind the most about this whole mish-mash is that is produced by...are you ready for this...Jack Russell.  Yeah, THAT Jack Russell, as in the Great White lead singer that is in my profile picture with me!  Never in a million years would I have predicted Jack sitting in the producer's chair on a project such as this, as it is so completely removed from anything he has ever done.  I guess I could hear him singing on a song like the semi-sorta-okay ballad, "Away" if he ever wanted to go in a modern rock direction, but other than that one possibility, which is admittedly a pretty decent stretch, there is nothing even remotely Jack Russell/Great White about this record...and really, nothing remotely good about it, either, other than "Melody".

Overall, this record really lacks direction as it tries to bring in too many influences, many of which come across as tired and dated, and brings absolutely nothing new to the table.  "Melody" is a decent track, but I hope no one who hears it thinks it is an accurate representation of what the rest of Steel Dust sounds like, because it simply is not.  My fear is that people will hear that song, like it, and then actually buy this record, which would be a horrible waste of money and shelf space ( or hard-drive space if you're a digital type of music collector).

Back To Reviews Index
Posted by arttieTHE1manparty at 7:57 PM