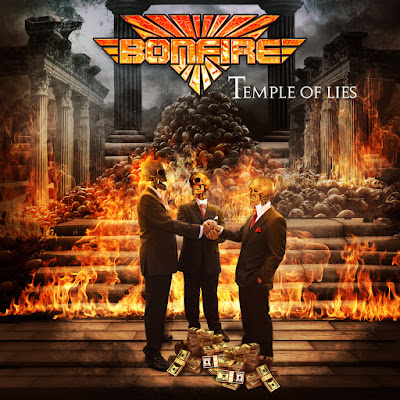 If you remove Scorpions and Accept from the mix, I would have to say that Bonfire is probably the most consistent, most recognizable German hard rock/metal band remaining from the 80s scene.  This is due, in large part, to Hans Ziller's relentless drive to keep the band moving forward.  Having released their first album under the Bonfire name in 1986 (the original version of the band was called Cacumen), Ziller is the lone original member still in the band, yet somehow the overall sound of Bonfire has remained generally consistent after more than 30 years.

On Temple Of Lies, Ziller has inserted Alexx Stahl as the full-time vocalist after he took over for David Reece as the band's touring vocalist.  With Stahl, the vocals now take on a more metallic approach, as opposed to the bluesy hard rock style that Reece, and long-time frontman, Claus Lessman.  While it may seem a stark departure for fans of the band's classic material, the addition of Stahl has breathed new life into the band, in my opinion, and gives Bonfire a place to launch from as they move forward from 2018.

The new album starts of with...dangit!...an intro called "In The Beginning".  It reminds me a bit of something Manowar may have done back in the day, as the narrator has a definite Orson Welles quality to his voice as he intros the album over a bed of pianos and thundering drums, alongside some excellent fretsmanship from Ziller and Pane, before it bleeds directly into the title track, "Temple Of Lies".  I guess I can give the band a pass for this intro, as I think it is basically set apart from "Temple Of Lies" for brevity's sake, as there is no place where you can say the intro ends and "Temple..." begins.  Regardless, it is immediately apparent that something has changed with Bonfire, as the higher-ranged vocals of Stahl command your attention as he brings a power metal quality to the band and this high octane rocker.  Strong backing vocals and some excellent drum work support the expected top-notch guitar work from the Ziller/Pane tandem, and Parkes' bass is a strong force throughout the track...and the record, for that matter.  What an excellent way for the band to kick off not only a new record but a new era for the band.

"On The Wings Of An Angel" is very much classic Bonfire material, and Stahl reins his vocals back in a bit, especially on the verse portions of this track.  Aside from serving the song well,. Stahl's range and command serves to let me know that he will be more than capable of handling the band's catalog from back in the Fireworks and Don't Touch The Light era in a live setting.  The downside is that it only makes me want to see the band live all that much more!  Any way, "...Wings..." is a great mid-tempo hard rock track with an excellent guitar solo and, again, some really strong backing vocals, which give the song a bigger, fuller sound.

"Feed The Fire" starts off with a slow synth build, with some strings overlaid as the tension continues to build, before the drums and guitars come crashing in on another hard-hitting, chugging mid-tempo rocker that again slips right into the classic 80s/90s Bonfire sound.  Stahl again sounds terrific, and the use of a supporting synth under the chorus bolsters the strength and power of the track.  The lyrics are a bit cliched, but that is easily forgiven on this big arena rocker that will likely have fists pounding the air and fans singing along as the band name-drops itself in the chorus.

The rest of the album carries on in a very similar vein, with virtually no letting up.  "Stand Or Fall" picks up the tempo from the two previous mid-tempo rockers, and Stahl elevates his vocals once again, adding that Euro-power metal styling to his singing and screaming, while "Comin' Home" showcases a band that is still perfectly comfortable delivering a piano-based ballad that, to my ears, would have fit very well on Fireworks, or even one of their best, later-era releases like Point Blank.  "I'll Never Be Loved By You" takes a different spin on what would seem to be a fairly cliched title, as it is not a ballad but an angst-filled mid-tempo rocker that again features some excellent backing vocals and a strong melodic approach that really showcases the strong overall songwriting on this record.  "Fly Away" is a catchy, uptempo rocker that once again features a strong chorus and the typical hard-charging rhythm guitars that Bonfire has almost always incorporated into their edgier numbers.  This song reminds me a bit of the more commercial Helloween material, especially in the chorus section, which again comes off as a bit cheesy but doesn't diminish the overall power of the track.  "Love The Way You Hate Me" has a quirky first verse (which I dig, to be honest), but there is a definite Dokken quality to the chorus sections and is easily one of my favorite tracks on the record, and "Crazy Over You" closes things out with another strong, melodic hard rock track that utilizes strong rhythm guitars and a supporting keyboard presence to really bolster another strong vocal turn from Stahl.

The production is very solid, with an excellent drum sound and nice separation of the guitars.  The keys are kept in the background, where I prefer them, and, as previously mentioned, Parkes' bass is a strong force throughout the record, adding that extra bit of punch when necessary.

I have read that there will be bonus tracks on the CD version of this album, but I have not heard them, nor can I confirm how many CD versions there will be.  All I can confirm for sure is that this is one record I will definitely be hunting down to add to my collection, as Temple Of Lies pretty much hits on all points and is easily the best classic-styled hard rock albums I have heard in the first quarter of 2018!  Sure, I'm always a bit bummed when bands lose their voice, but Stahl is an excellent choice to front the band, and while I like what Reece did, I find Stahl to be a better overall fit while also adding a new, higher-ranged metallic element to this long-standing band of classic German hard rockers!

Rating:  Crankable, without question!  Turn this way up to 9 and let the Bonfire burn brightly!

Back To Reviews Index
Posted by arttieTHE1manparty at 1:57 PM