LA GUNS "Made In Milan" 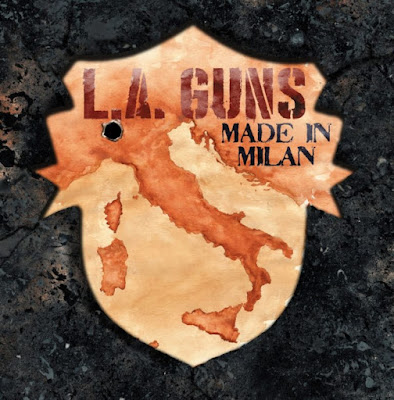 Shortly after the release of their critically acclaimed comeback record, The Missing Peace, LA Guns performed a live set of sweat-drenched and sleaze-coated hard rock n roll at their parent label's showcase, Frontiers Festival, in Milan, Italy.  After spending a decade apart, the heart and soul of LA Guns, Lewis and Guns, have reunited and have embarked on a mission to prove that time has done little to diminish the excitement and electricity of one of the best bands of the 80s sleaze scene.

To a large degree the band succeeds in this live package, which also comes in a deluxe version that features a DVD (which contains an additional track, "The Bitch Is Back", located right before "Sex Action" on the DVD).  The crowd is very obviously into this 60+ minute set, with loud, raucous shouting and chanting going on all over the place in the record, although some of the crowd participation elements on some songs' choruses isn't picked up very well in the mix.  Likewise, the band, to me, sounds like they are obviously having a good time (I have not seen the DVD), and the sound is very full, which I credit in large part to the second guitar that is wielded by Michael Grant, who has subsequently been fired from/left the band.  I have always thought that having both a lead and a rhythm guitar player is such a boost to a live band, and with a talent such as Grant supporting a legend like Guns really gave the band a kick in the pants live.  I have seen the band in various incarnations...with only Guns, with Guns and Mickey Cripps, with only Grant, with Stacey Blades, and in a couple of other combinations...and they have ALWAYS sounded better with two guitar players...always.  Such is the case on Made In Milan, and I am curious as to what will happen with the band now that Grant is gone, as I feel he was a key contributor to the band's revitalization.

Regardless of the never-ending-revolving-lineup that is LA Guns, Made In Milan is a generally very good live record.  There are a couple of places where the now 61 year-old Lewis sounds rather out of breath, and he changes the register he is singing in on more than one occasion, but overall, he sounds in decent form and sounds like...well, he sounds like Phil Lewis.  He will never be mistaken for a "singer", by any stretch, but his particular raspy yowl is a huge part of the classic LA Guns sound, and honestly, very little has changed over the years, either on record or in a live setting, except for some register adjustments he makes live, which I'll get to in a moment.  I'm not a fan of singers that pull a "Vince Neil" and slur over...or flat out skip...parts of lyrics, which Lewis does do on only a couple of occasions, most notably to me on "Sex Action", where he leaves out an entire line of a chorus, although this could be one of the occasions where he was allowing the crowd to sing along and the crowd mix is simply too low to be heard.  I did enjoy the way the band morphed "Sex Action" into "Paint It Black" on the outro, and Lewis' voice works very well on the few lines he gets to run through before wrapping the song, so I'll give "Sex Action" an overall passing grade, I suppose.  I'm also not a huge fan of the change in phrasing that he uses in "Over And Over", which I think is one of the most overlooked and underrated songs in the band's massive catalog, but it doesn't do major damage to one of my all-time faves from the band.  His handling of "One More Reason", had me a bit frustrated as well, as I have always loved this song and Phil again skipped over parts of the chorus, which just annoys me when I'm singing along.  The same can be said of "The Ballad Of Jayne", which felt like it was about half-crowd-performed, to be honest, especially on the first run through the chorus.  I'm sure Phil was getting pretty gassed by this point, as a lot of the steam of his performance seemed to be waning later on in the set, which is most likely due to the fact that the guys came out absolutely on fire and out to prove something, which they definitely did in the first 20-25 minutes.  They were absolutely all guns blazing early on,and I can't help but feel like "Jelly Jam" was added to give Phil a bit of a breather.  Like I said, he still sounds really good for the most part, but there are just times where he doesn't feel like he can reach back and really rip into a chorus or a particularly biting verse, which is frustrating, if understandable.  We all get older and can't always "reach back" like we used to.  I will say that, overall, he sounds much better on the loud, high energy rockers such as on the ferocious attack he was leading at the outset, as well as on the classic closer, "Rip And Tear".  On a side note, he does a good job of intro-ing songs and interacting with the crowd, which I feel has always been a strong point for Phil as a front man.

Tracii Guns, on the other hand, effortlessly rips through solo after solo on this live set, which I again attribute to him being able to focus solely on the leads while letting Grant handle the majority of the rhythm work.  Guns manages to keep a sense of urgency in the solos on the classic material, such as the previously mentioned "Sex Action" and the blistering "No Mercy" and "Electric Gypsy", which come ripping through the speakers right from the jump.  He also does an excellent job of blending more current material, most notably "Speeed" from The Missing Peace, into the mix and making it feel as classic as "Malaria" or the vicious closer, "Rip And Tear".  To be candid, I am not a fan of the "Bow Solo" that leads into "Over And Over" (although "Over..." sounds great!), as the mix really doesn't do it justice as there is a lot of background noise and much of the effect of the bow work is pretty much lost, at least on the CD.  Maybe being able to see him working the bow as you listen adds to it?  I'll likely never know, as I don't generally "watch" my music, especially from bands I've seen live multiple times.

The band's rhythm section is pretty tight, overall, especially the drums, which are absolutely being beaten to death at times.  I don't detect any indication of additional instrument tracks or any backing tracks being included in the mix, nor are there any glaringly obvious touch-ups, even though we all know a truly "live" record is an amazingly rare beast.  That being said, there are the occasional missed notes here and there, but they only serve to add to the "real" feel of the release, so I'm okay with that.  The backing vocals are not particularly strong, to be honest, but you can argue that LA Guns has never been a band about big harmonies and layered backing vocals...but I wouldn't be upset if one of the guys could carry a tune and not sound like they are shouting everything at me!

The song selection is a bit curious to me, although I wouldn't say it is bad or weak, necessarily, and it is definitely stronger than 2013's Live In Concert.  Personally, I would have dropped "Jelly Jam" and "Killing Machine" in favor of "The Bitch Is Back" (which, as I stated, IS on the DVD), "I Wanna Be Your Man" (which NEVER gets played now...), and maybe another new tune such as "Sticky Fingers" or "Drop Of Bleach".  Again, the CD only clocks in at about 62 minutes, so there is definitely room for another song or two, even if nothing was cut, and I like to have things shaken up every now and then by lesser-known tracks or even the occasional album cut.  Still, most of the band's best-known songs are featured here, with something from each of the first four albums, plus the great Waking The Dead, and I suppose it's understandable why non-Guns albums were skipped over.

The mix is a bit flat in spots, with the bottom end lacking in places, and as I mentioned elsewhere, the crowd mix is inconsistent.  Now, to be fair, this is a digital review download, which history has shown me is not always consistent with the sound quality of the actual CD or DVD, so I'm going to withhold a bit of judgement here.  However, a lot of people have complaints about various Frontiers releases and their mixes, so I'm sure there are going to be some complaints no matter what.  All this being said, this is definitely raw and gritty and sleazy and does a pretty good job of capturing the essence of nearly every LA Guns show I have seen, from the first time back in the very early 90s, to as recently as SkullFest 2 just a few years back.

Rating:  A pretty good set, overall, and probably the best of the live recordings the band has released.  Crank this to an energetic 7.5, even with its minor warts and flaws.

Back To Reviews Index
Posted by arttieTHE1manparty at 8:53 PM