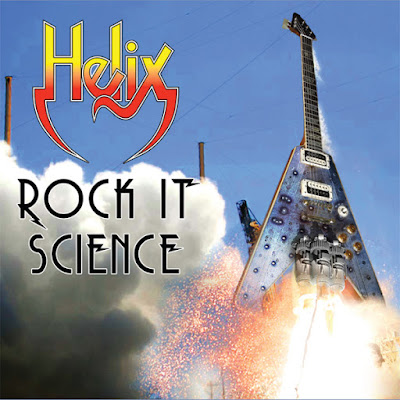 I have had a soft spot for Helix pretty much since I discovered the band back in the early 80s.  There was just something about the catchy, hooky hair metal that these guys played that struck a chord with me.  Heck, when I did my first bodybuilding contest, I posed to the song "Rock You"!  For me, the stretch of albums from 1983's No Rest For The Wicked through 1987's Wild In The Streets was just about as solid of a 4-album run as any band put out during that time, and Helix did it with a new album every year.  Their 1990 Capitol Records swan song, Back For Another Taste, was also very good, if not quite up to the same level as their previous four, and 1993's It's A Business Doing Pleasure, which was supposed to be a Vollmer solo record, also contains several good tracks.  I wasn't nearly as fond of their output from about 1994 on, but still continued to follow the Canadians and their musical endeavors.  Then, in 2009 the band kind of pulled itself out of a funk of about 4 pretty bad albums with Vagabond Bones, which while not spectacular, showed life and promise for the band, and then in 2014, things really seemed to click again with that year's album, Bastard Of The Blues, which I absolutely love.  So when I saw the band was putting out a new compilation album of largely re-recorded "hits", along with one new song, I was interested to hear what was going on.

This collection starts off with two old tracks, as in "pre-my-Helix" songs that most people aren't likely familiar with, and neither one really gives even an inkling of what the band will sound like in just a few short years.  "Billy Oxygen" and "You're A Woman Now" both come off of the band's debut Breaking Loose album from 1979.  Vollmer is the only current band member to have played on these two songs, and, if I'm not mistaken, these are the only two originals on the record.  Honestly, I'm not really sure why these two tracks were included, as they are so starkly different sounding, both in style and in production quality, from the band's later material...and the re-recorded material here...that they really don't fit.  As part of a very limited retrospective of the band's career, I can see why they are included on Rock It Science, but I don't think anyone would have missed the "Ballroom Blitz"-inspired "Billy Oxygen", and while the Aerosmith-sounding ballad "You're A Woman Now" is a really good track, it doesn't have the pomp or polish of "Deep Cuts The Knife", which most view as the true Helix ballad.

While Vollmer is the only original member of Helix still in the band, both Gray and Hinz have been with the band throughout their biggest moments.  Hinz came on board starting with 1983's No Rest For The Wicked album, which is represented here by "Heavy Metal Love", which was the band's first charting single in the US, cracking the Top 25.  Gray then joined up with Helix on the band's seminal Walkin' The Razor's Edge album, which features the band's most well-known song, "Rock You".  Both of these songs have been faithfully re-recorded for Rock It Science, but longtime fans will definitely be able to pick out differences, particularly in the chorus vocals on "Rock You", although it is amazing how good Vollmer still sounds all these years later.  A lot of times re-recordings will grate on my nerves as there is just no comparison between the originals and the re-recordings, but that is not the case here, as these reworkings are of top-notch quality.  Add in the updated production and recording methods, and an honest person would have to say that the new versions actually have better sound quality than the originals, even if you still have a nostalgic cling to the album versions.

"Deep Cuts The Knife", from 1985's Long Way To Heaven album, is the band's highest charting US single, hitting number 20.  Once again, this classic track has been re-recorded, but is done so faithfully and executed so well that only a truly discerning ear will likely notice any major differences.  Again, major kudos to Vollmer and the boys for staying so true to themselves and their fans on these re-recorded tracks.

"Wild In The Streets" was the title cut from the band's 1987 album, and is one of my favorite songs ever from the band.  As I mentioned previously, this album was the last really good album in their most successful stretch, and the re-recording of this song is another really strong contribution to Rock It Science.  There are some keys/synths added to the mix that were not on the original (particularly in the chorus section), and I am not completely sure as to why the band felt the need to incorporate these.  They are not distracting, however, and give the song a bit fuller sound here, which was perhaps the goal.

"Good To The Last Drop", which I think is the last re-recorded track here, comes from the band's last major label release, 1990's Back For Another Taste.  A slower rocker, not really a ballad, this is another one of my faves by the band yet is one that most non-fans likely have never really heard.  Interestingly, this song was not actually released as a single from the album, as that distinction falls to "The Storm", which I think would have been an excellent inclusion here, as well.  However, with each represented album only getting a single track, "Good To The Last Drop" is a sensible choice to help change up the pace of this collection.

"Shock City Psycho Rock" is an absolute barn-burner of a song, and it is a lot of fun...for a few spins...but it wears thin after repeated listens.  Taken from 1998's Half Alive album, this was one of five new songs recorded for an album that also featured 10 live tracks from the band's 1997 tour.  While a fun song, you can only listen to a kazoo solo in the middle of a song that otherwise skillfully blends Helix's hard rock style with Chuck Berry or Jerry Lee Lewis styled 50s rock n roll.  It's really too bad this cutesy little novelty was thrown into the song, as it is overall a really, really good song that showcases a lot of musical skill and a fun, old time rock n roll.

The rest of this package focuses on songs that were the best from the albums they were lifted from, which often isn't saying a lot, as so many Helix albums from about 1997 on were not overly good and featured maybe one or two truly good songs.  "Get Up!" is a pretty good rocker that comes from 2006's album of the same name, and "Make 'Em Dance" comes from Vagabond Bones, which was the album that I felt found Helix starting to find themselves once again.  Of course, "Even Jesus (Wasn't Loved In His Hometown)" jumps from the excellent return, Bastard Of The Blues, and leads into the fun new rocker, "(Gene Simmons Says) Rock Is Dead".  Yeah, the lyrics are kind of stretched in spots as rhymes are reached for, but overall, this is a fun listen that shows a band that never took itself overly seriously...sometimes to their own detriment...and that is still making music for the fun of it.

When I look back at the track listing for this album, especially when considering the overall run time of the project, I am a bit surprised that no songs were included from 1981's White Lace & Black Leather, or 1993's It's A Business Doing Pleasure, which featured several strong songs, including "Misery Loves Company" and "Love Is A Crazy Game", both of which would have fit well here.  I'm also a bit curious why albums from 2004 (Rockin' In My Outer Space), 2007 (The Power Of Rock N Roll), and 2011 (Skin In The Game) were all skipped over...except for the fact that the first two were, in my opinion, generally awful albums.  If I ever get the chance to interview Vollmer, I will try to find out the reason for these exclusions...

All in all, this is a pretty good collection, even if it is a bit under-representative of the band's great years and completely ignorant of a few albums.  The re-recordings are excellently done, Vollmer's voice is still in great shape for what he does, and the trio of Vollmer, Gray, and Hinz continues to carry on the Helix name and tradition in fine fashion.  While probably not my choice for introducing new fans to the band (I would still steer those folks toward the 1999 Deep Cuts compilation), it is a good cross-section of the band's music from their earliest form to the latest new song they have recorded.  Perris Records did a nice job with this collection, and I hope Helix has another really good album or two in them before they call it a day.

Rating:  I don't generally rate compilations, but with so much of this being re-recorded, and since it has a new song, I'll give this a crankable 7.

Back To Reviews Index
Posted by arttieTHE1manparty at 11:29 AM