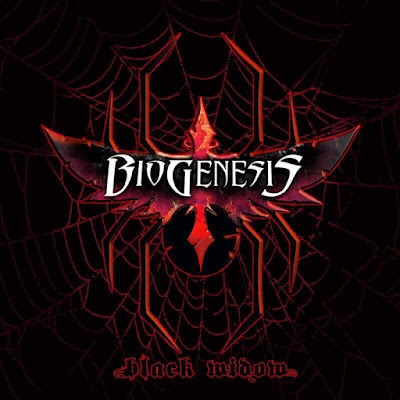 Following a successful reunion record, last year's A Decadence Divine, Biogenesis wasted little time in getting back to the studio to record this follow-up EP.  Consisting of three new tracks, a cover song, and a reworking of a track from their debut album, Black Widow finds the band in fine form and charging hard heading into 2019.

The EP starts off with the epic title track, "Black Widow".  Clocking in at nearly eight minutes, this song sounds to me like a gruffer, heavier Savatage in a way.  A clean acoustic guitar leads the track in before drums are added to the mix, followed by some rather fierce rhythm guitars from Riggs, and then synthesized strings. Bond, who along with Riggs are the only original members left from the band's debut album, once again showcases why his vocals are a step apart from so many other singers in metal today.  Not ear-shatteringly high, but always powerful and with a strong vibrato when required, Bond delivers both clean and harsh vocals here, sounding even stronger than he did on the 2001 Rowe Records debut, The Mark Bleeds Through, before he put Biogenesis to rest as he went on to front Jacob's Dream for a couple of albums.

"Human Equilibrium" is considerably shorter, at just over five minutes, and the symphonic elements are more out front, weaving their way throughout the tapestry of the song.  Aggressive rhythm guitars are the order of the day here, and Closson's drum work is top notch, as well.  Bond employs a lot of aggression in his vocals here, bordering on the extreme at times with his howls and growls, but he is never hard to understand and never fully crosses over into death or black metal territory.  I love the fact that the band is allowed to perform on this track...and every track here, really...meaning that there doesn't have to be layers of vocals filling up every nook and cranny of the song other than a guitar solo section.  The drums and rhythm guitars are in full effect at all times, especially with a couple of different time changes here, a keyboard solo is thrown into the mix, as is a guitar solo, and the bass at the bottom end is easy to feel and appreciate.  The progressive nature of this track is so beautifully supported by the crunchier, thrashier elements, this is just about the perfect metal song to these ears.

"Angel" is a big power ballad that also happens to be the first single from the EP.  In many ways, this track reminds me of the progressive style that Deliverance was employing on their Camelot In Smithereens and River Disturbance albums, utilizing huge, sweeping, melodic sections interspersed with crunchy rhythm guitars and layers of power vocals of varying ranges.  There is a piano presence throughout the song's seven-plus minutes, as well as more orchestrated synthesizer sections, as well.  Not my favorite track here, but definitely solid and a nice stretch from the more aggressive metallic assault employed on the other four tracks.

Speaking of Deliverance, "Flesh And Blood" is a cover of one of my favorite songs from the classic Christian thrashers, off of their seminal release, Weapons Of Our Warfare.  Musically, the guitars and drums keep their same thrash nature for most of the song, but the addition of the symphonic elements used by Biogenesis is pretty interesting, as is the significant time change after the second chorus section that leads into a massive instrumental section that was not a part of the original.  Of course Chaz Bond shares pretty much nothing in common vocally with Jimmy P. Brown II of Deliverance...other than incredible power...but what he does here fits in nicely.  The drums are insanely fast and furious here, and the more modern production adds a bottom end that was not present on the original working of the track way back in 1990.  There is also a keyboard solo thrown into the mix that I can guarantee you was not in the original back in the day, but somehow it all works out, largely thanks to the relentless rhythm guitars from Riggs who has the unenviable task of trying to replicate the work of Brown, one of the greatest rhythm guitar players in metal history. The synthesized orchestral sections serve remind you that the band is not out to just rehash a classic, but to put their own spin on one...which are two very different ways to approach a cover song.  As a massive fan of Deliverance, I still stand by the original, but I will tell you also that I appreciate everything Biogenesis does on this track and consider it one of the better cover attempts of a Deliverance song I have ever heard, which is saying something as I was the co-executive producer of a 2-disc Deliverance tribute album a few years back!  Excellent work here that I found myself enjoying far more than I would have thought possible!

The EP closes with a reworking of an original Biogenesis tune, "Anti-Evolution".  Musically, the song remains relatively true to the original as far as style and tempo, but vocally there is a lot more edge to this new version, with Bond mixing in more harsh vocals than he ever attempted in Biogenesis V1.0, and backing off on the somewhat Gothic approach he employed on The Mark Bleeds Through.  There is also a layer of symphonic synthesizers that was not present in the original, and Riggs' rhythm guitars are maybe not quite as out front as on the original, BUT there is definitely more lead guitar on the new version.  Its hard for me to say, "I like this version better than that one", as both are excellent versions of one of my favorite tracks from the band.  If forced to choose, I think I would choose the vocals and lead guitar work here, along with the synthesized strings, and go with the punchier, crunchier rhythm guitars from the original.  How's that for decisive?  Honestly, you can't go wrong with either version, and this one fits where the band is stylistically much better than the original would.

The Biogenesis style is not going to be for everyone, to be sure, but there is no denying their uniqueness in the metal world.  Combining elements of thrash, power metal, symphonic metal, and touches of modern metal all into one swirling, churning, moshing vat of hard music is not an easy task, yet Biogenesis pulls it off keenly!  The resurgence of this band is an exciting one for me, and should be for anyone who considers themselves a fan of metal.  This is good, good stuff, folks.

If you want your own copy, you had better hurry, as there are only going to be 300 of these EPs printed, and then they will be gone. To get yours, head over to www.roxxproductions.com now, before they disappear!  Plus, I am told if you order during the Thanksgiving weekend, you will also get the Roxx Records "best of 2018" CD that will also include a bonus, original Biogenesis Christmas track, as well.

Rating:  Definitely crankable!  I wish it was a bit longer on new material, but the cover and reworking maintain a consistency of sound and style that leaves this EP firmly in the 8 range!

Back to Reviews Index
Posted by arttieTHE1manparty at 5:45 PM