HUSH "If You Smile (Recycled)" 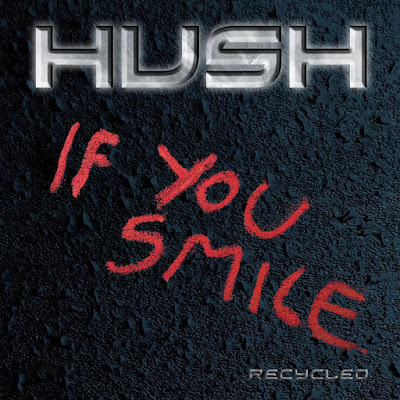 Hailing from Norway, Hush is a highly polished melodic rock/AOR band that wears its 80s influences with pride.  Definitely more guitar-driven, and with fewer keys than many of their European AOR peers, Hush has decided to re-release their 1998 debut album, If You Smile, but they are doing so with a bit of a twist.  Rather than simply repackage the old album, and instead of completely re-recording the album, the band is doing a bit of both.  Utilizing two new band members, the band has decided to release what they are calling a "20 Year Jubilee Edition" of the album, hence the title, If You Smile (Recycled), with a 50/50 mix of old and new recordings, sometimes even within an individual track.  It is definitely a different spin on the idea of a reissue, to be sure.

The tracklisting is identical to the 1998 original that was released on AOR Heaven/JVC Victor, with the only exceptions being the bonus tracks.  "Hold On", and "She Will Be The One", are brand new acoustic bonus tracks for this release, while the original 1998 bonus, "If (Butterfly)", has been dropped altogether.

"Talk To Me" starts things off, and is a great representation of what to expect from this album, overall.  Solid guitar hooks, strong tenor lead vocals with nicely layered backing vocals, and straight ahead rock rhythms are what Hush does best.  While not rocking quite as hard as Stage Dolls do on their edgiest material, Hush is definitely a guitars-out-front band, and Kristiansen is a formidable player, both on rhythms and leads.  Lyrically, "Talk To Me" isn't particularly deep, but that just adds to the overall feeling that you have heard this band before...perhaps in a high school gym somewhere in 1988...even though this album didn't originally see the light of day until a full decade later.

"Babe" has one of the corniest lyrical phrases I think I have ever heard, when Simonsen intones, "I live in a one-room monkey cage, too shy to hold the rage" as he describes the craziness of his life with out the "Babe" that is the object of his affection.  It's hard to not laugh when I read what I just typed here, but they are his words, not mine. Apparently he escapes that cage later in the song because he is found "walking sleepless through a dead town and the wind is blowing me again, down a cold and sunny street/I'm feeling helpless on the rebound, though I'm wandering from the wake-up and one lie from the truth." Ummmm...what?!  Despite the absolutely desperate grab for some sort of emotional lyrical hook here, the music on this track is actually really good, and Kristiansen has a great guitar solo here that has a good chunk of the emotion that the lyrics are lacking.

"Believe" starts of with some rather frenetic guitar work from Kristiansen, before it settles into a bass and drum track for most of the verse sections except for a couple of guitar licks that sound like they were lifted from "Get It On (Bang A Gong)", as remade by The Power Station.  Not kidding...note-for-note.  Now, on the original 1998 version, this doesn't happen, as the song featured a LOT more keys than it does in this new version and that guitar lick simply doesn't exist.  I think the new version is better, overall, as I am generally not a huge fan of gobs and gobs of keyboards being shoved into my ears, but to ignore that simple guitar hook is virtually impossible for me.  Regardless, the song is one of the better moments here, and again, Kristiansen gets to flash some nice skill on guitar.

"Piece Of The Action" has a bluesy feel to it, from the opening guitar lick to the funkier delivery style used by Simonsen.  Definitely not the typical style and feel of the majority of the album, but I have to admit to liking what the band is showcasing here, and Kristiansen's versatility is on full display.  There's a nice bass groove to this tune, as would be expected from a blues-funk number, and the drums do just enough to keep the tempo rolling while managing to stay out of the way and not distract from the guitar antics here.

"Let It Rain" is a piano-based ballad where Simonsen gets to stretch his chords a bit, although he goes down in range, rather than up, adding some huskiness and sounding relatively similar to Foreigner's Lou Gramm in his prime.  In fact, this entire song feels like something Foreigner might have tackled on their Inside Information record in 1987, as does the next track, "This Side Of Love", albeit this song also has something of a "Purple Rain" quality to the music, particularly in the slow build at the beginning.  Again, Simonsen channels his inner-Gramm here, particularly on the verse sections, and Kristiansen delivers a tasteful, soulful solo here that really fits the slower tempo and milder approach.

"Heaven Ain't..." picks the pace back up just a bit, and this feels a lot like the best mid-tempo rock material that Stage Dolls has released.  Simonsen comes off as confident here, his voice flowing effortlessly on this track that you will swear you have heard before, especially on the verse sections.  This song is so comfortable, so easy to listen to, that I find myself dragged back in time every time I play it.  This is what Hush does especially well when they are at the top of their game, even fighting through a corny line like "I'm on a Mercedes ride to the moon".  Kristiansen again flashes some big time skill on the guitar, and I find myself wondering if he wouldn't have been better served auditioning for one of the bigger Scandi bands, rather than forging forward with Hush.  He really is that talented.

Things stall out a bit at this point, as "Big Time" sounds like a movie soundtrack song from 1988...and not the big, hooky track that is released as a single.  No, "Big Time" would be the track that plays as the credits roll on one of those cheesy raunch comedies ("Porkys" or "Hardbodies" come to mind), where they play something uptempo and punchy, but also just annoying enough to get you to hustle out of the theater so that the staff can come in and sweep out the popcorn before the next show.  "G and B" is equally as cheesy, but in ballad form, and it pales in comparison to the much better slow material of "This Side Of Love", and the album proper ends on something of a whimper.

The two acoustic bonus tracks here are pretty good and nice additions to the record.  "She Will Be The One" has a catchy rhythm, a toe-tapping acoustic rocker that finds the band sounding so comfortable, so completely at-home, that I wonder what a full acoustic album from this band might sound like.  "Hold On" is a much slower acoustic song, and is well-performed, especially by Simonsen.  The percussion section here is a nice touch, giving the song an overall different feel, sounding like it was written and structured to be acoustic, rather than coming across as just an "unplugged" song.  The harmonizing here is good, and Kristiansen plays a really nice, clean acoustic guitar, counterbalancing the amplified antics he employs throughout the rest of the record.

So, if you have the original, is it worth tracking the new version down?  In my opinion, yes.  I think the new version has a fuller sound, with slightly better production, although the original still sounds pretty good to me.  Plus, this version has FAR fewer keyboards than 1998's effort had, with the guitars grabbing a lot more spotlight here, which is definitely a bonus as Kristiansen has a LOT of talent, which he gets to display far more often here than in the past.  "Hold On" is a pretty good addition here, and "She Will Be The One" is flat-out catchy and one of the high points of the record.  If you don't have the old version, but are a fan of Scandinavian melodic rock and AOR, then I would add this to my list of wants, even if its not at the very top of the list.

Overall, if you are a fan of Scandirock bands like Stage Dolls, DaVinci, Grand Design, or even North American bands such as Giuffria or Honeymoon Suite, you are likely to find something to enjoy about this release, but don't expect a genre revolution.  It is a bit lyrically cliche...and makes some extreme lyrical stretches at times...but more often than not, the solid guitars, better-than-average vocals, and overall well-written songs make up for the lack of original wordsmithing here.

Rating:  A solid rocker at 6.5, I suggest snagging this new version over the 1998 version.