STEPHEN PEARCY "View To A Thrill" 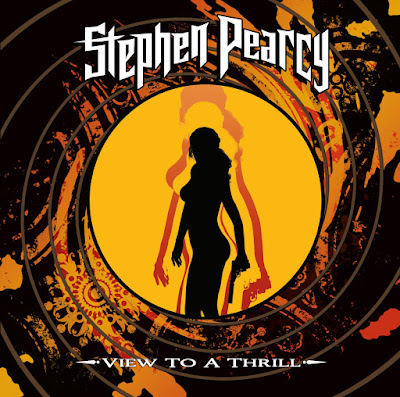 While the band Ratt continues to slog things out in the court system to see who can call themselves Ratt and to try to sort out who is in the band (currently, Pearcy and bassist, Juan Crocier own the band name, with drummer Bobby Blotzer on the outs and guitarist Warren DeMartini apparently in exile or retirement), the always-interesting lead singer has released his second solo record in as many years.  Once again enlisting the help of Erik Ferentinos on guitars, and Matt Thorne (Ratt, Rough Cutt, Jailhouse) on bass, Pearcy also brings Scot Coogan (Brides Of Destruction, Rat Bastards) on board to put forth the best Ratt record the band has never made.

From the album artwork to the thinly-veiled name change of the album title, it is apparent Mr. Pearcy has something of a James Bond fetish going on here...there are also numerous James Bond mentions in the lyrics...but don't worry; Pearcy isn't out to sound like Duran Duran on their soundtrack hit, "View To A Kill".  In fact, this is pretty much exactly what you would expect from Pearcy and his rodent-esque pals (Thorne co-wrote Ratt's monster hit, "Round And Round", and Coogan played with Pearcy in Rat Bastards), which is pretty much shamelessly Ratt-sounding music.

Things kick off with "U Only Live Twice", which sounds to me like it wants to bleed right out of "Shame, Shame, Shame" from Detonator, with the way the guitars into the track.  Pearcy sounds in top form here, with his voice sounding as good as it has in years, both in lead and backing vocals.  Coogan's drums are sharp and snappy, and the bass hits hard on this slithering rocker that sounds very much like vintage Ratt.  Ferentinos rips off a Ratty solo and everything is clicking right from the start.

"Sky Falling" continues this trend, with Pearcy sounding quite a bit like he did back in the Invasion Of Your Privacy days, and the supporting vocals from Thorne and Ferentinos really help to bolster the overall sound.  Ferentinos delivers an excellent solo here, possibly the best on the record, in what I would have to say is my overall favorite track on this new album, although "U Only Live Twice" and "I'm A Ratt" try to lay claim to that title as well.

"Malibu" keeps right on with the top-notch rock, with another catchy, guitar driven rocker.  In fact, "One In A Million" and "Double Shot" do exactly the same thing.  There isn't a ballad to be found on this record, only rocker after rocker after rocker.  "Double Shot", which drops a Bond reference with the lines "die another day" and "man with the golden gun", is a cool, punchy track that also quotes his own band, going "round and round and round" on the vocal bridge before the solo.  Like I said before, Pearcy doesn't shy away from who he is or what he does, and especially on the first five tracks here, and then BLATANTLY on "I'm A Ratt" a few tracks later, he is playing up his past in no uncertain terms...and this Ratt fan is perfectly happy with that!

"Secrets To Tell" is a bit more aggressive in the guitar approach than some of the other tracks here, but it works really well.  The tone reminds me of "Slip Of The Lip" from the Dancing Undercover record, which I think is criminally underrated in the Ratt catalog.  Again, Pearcy sounds spot-on, and while there are is a somewhat modern production approach here, it doesn't alter the sound to come off as anything other than what it is.  Make no mistake, Pearcy isn't trying to sound like Shinedown or Godsmack or Halestorm here; this is non-lawsuit-involved-Ratt-music pure and simple.

Thorne gets to shine a bit on "Dangerous Thing", which features a thick, nasty bass groove, and some odd time signatures in a couple of places on what is the least-Ratt sounding song on the record.  Pearcy tries to work his magic, and there is some fast and furious shredding from Ferentinos, but there is something that is just a bit off for me.  Still an interesting track, but definitely not my favorite here.

"I'm A Ratt"...well, do you really need to ask where this track is going?  The lead single from the album, "...Ratt" is everything the title would have you believing it is, with a catchy guitar hook, pure 80s-era production on Pearcy's voice, and a great rhythm and tempo, with a really tasty solo from Ferentinos thrown into the mix.  I have heard some people complaining about this being the lead single, and for the life of me, I have no idea why.  This is EXACTLY what fans of Pearcy and Ratt should be clamoring for.  Yeah, I'm not exactly a fan of that weird musical tag at the end of the track, but I can forgive the last 12 seconds for what is an otherwise great Ratt track!  Easily one of the top two songs for me on a record filled with great stuff.

"From The Inside" is another great, straight-ahead rocker that channels a bit of Cinderella's "Somebody Save Me" in the rhythm guitar line and the phrasing of the verse sections.  I'm not completely sold on what Ferentinos is doing on guitar in a couple of spots here, but I'm not reaching for the skip button or anything, and to be fair, Ferentinos does right his guitar ship on the work he does as the song closes.

The album closes in nasty fashion, with the sleazy "Violator" wrapping things up nicely.  Pearcy manages to weave another James Bond reference ("007" thrown into the first verse here...) into the record, along with some gang-chanted "hey, hey, hey's" to get the crowd pumped up in the live setting, no doubt.  Again, a bit more modern sounding than most of the other songs, at least from a production standpoint, but still an overall solid track to close out a really good Ratt...err...Pearcy record!
The typical "I hate Frontiers' production" complaints have been bandied about when the singles and videos were released, but I honestly don't have an issue with this record.  Yes, there have been a few Frontiers Records releases this year that I have found less than appealing as far as production goes, with some muddiness issues, but I don't get that from View To A Thrill.  Is it the crispest sounding record I've heard this year?  Nope, but it's not supposed to be, either.  That is never what Ratt was about, and it isn't where Pearcy has come from on any of his solo records, either.  The grit and sleaze and sludge are part of the sound.  Overall, I have no problems with the sound of this record.

I know there are going to be people who complain that Pearcy isn't stretching himself or that he is just trying to cash in on Ratt.  Ummmm....duh!  This is who Pearcy is and what he has (mostly) always played, even when he polished the sound a bit for Arcade.  Look, if you were expecting anything else from this record, you have not been paying attention to Pearcy lately.  The man is pretty much out to prove that he and his version of Ratt are the real deal, and the music on View To A Thrill is more Ratt than anything that's been put out in a decade or so.  Sounding very much like it could have slotted in right between Detonator and Infestation, this new effort from Pearcy should be pure ear candy for any Ratt fan.  Another excellent solo record from the Ratt frontman, and even better than last year's really good Smash.  Whether or not we ever get another true Ratt album is anyone's guess at this point, especially with the apparent insanity of Bobby Blotzer, Warren DeMartini's "retirement", and Pearcy's own problems at some recent live shows.  But, if we don't, View To A Thrill is about as good as its going to get...and that's pretty dang good!