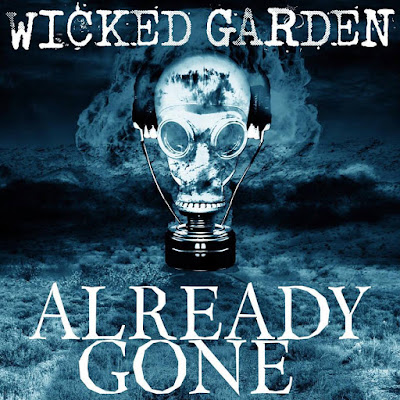 For anyone that is somewhat familiar with the 1990's hard alternative/grunge scene, the name of the band, Wicked Garden, should pretty much immediately draw your attention.  For the uninitiated, "Wicked Garden" is the name of one of the biggest songs of Stone Temple Pilots' career, despite the fact that it was never released as a single from that band's 1992 debut record, Core.  So, knowing where the name comes from, it should be no real surprised that Wicked Garden, the Las Vegas band, is heavily steeped in the musical scene from which their name was extracted.

Combining bits of the grunge of Stone Temple Pilots, Nirvana, and a touch of the hard alternative of Live, and even Filter...especially on the vocal effects used in parts of "Hey Bitch"...Wicked Garden plays a style of music that (unnecessarily?) divided the hard rock community in the early 1990s.  Either you mourned the death of glam and hair metal, or you found yourself embracing the bottom-heavy angst of the grunge movement.  If you are stuck in a world of stacked hair and stacked heels and Hair Nation, you are probably not going to find much to like in Wicked Garden, but if you are like me, and enjoy flipping over to SiriusXM Lithium on a regular basis, this band is going to be right up your alley.

This maxi-single kicks off with the title track, "Already Gone", and it is instant grunge and sludge oozing out of the speakers.  Bottom heavy and thick, "Already Gone" features everything that was great to me about the grunge sound and instantly recalls Stone Temple Pilots and even some Alice In Chains due to its heft.  Lead singer, Muzio, has a vocal style that is somewhere in the vicinity of those employed by Jason Ross of Seven Mary Three.  Unlike a lot of the music of the time, however, Wicked Garden is not afraid to throw in a distorted, down-tuned guitar solo, and the band calls upon their pal, Michael "Doc" Ellis to lay into a great one here, before the bass and drums take back over and escort Muzio back into the final chorus section.

"I-15 South" is an interesting track, as it is much moodier than the other two songs on this maxi-single, and features guest duet vocals from Todd Kerns, the bassist and backing vocalist for Slash featuring Myles Kennedy and the Conspirators.  The track starts off with simple guitar line running atop the thicker bass and drum sounds on the entire first verse, with both Muzio and Kerns taking their respective turns on the lead microphone.  By the time the second verse kicks in, the entire track has beefed up considerably. Musically, I hear elements of Live in the style, and even a bit in Kerns' vocal turns (although never as high in range), on the first trip through, but we drift into Seven Mary Three territory on verse two and throughout the remainder of the track.  Trojahn utilizes a nice slide-guitar solo to great effect here, adding a bit of a bluesy feel to this grungy alt-rocker that was written as an ode to Las Vegas.  The harmony vocals on the chorus sections are great stuff on their own, but when listened to as a whole with everything else going on here, they are merely icing on the cake for fans of this style of music.

The single closes with "Hey, Bitch", which combines a definite Nirvana musical feel...think that watery guitar tone used in "Come As You Are"...with a Filter vocal approach on the verse sections, a la "Hey Man, Nice Shot".  Once again, the soloing here from Trojahn is a great addition to what is basically a bass and drum thumper of a song throughout the verse sections, with occasional rhythm riffs dragged across the surface of the song and tying each verse into the accompanying chorus sections.

The production here is raw and completely polish-and-shine free, retaining just enough of that grungy garage recording element to lend authenticity to the style of music employed here.  My guess is this any of these songs could be thrown into a mix of 90s period music and most people would be none the wiser, as these three tracks are pulled off that well and performed that true to form.  I wouldn't mind if the mix was cleaned up just a bit, but overall, these guys have the sound down pat, and nothing here is a major distraction for this style.

This maxi-single is just a teaser of the band's full-length, debut album, Post Dystopian Leisure Music, which is set to be released in early 2019, and is currently available on iTunes and Amazon.  I believe you can stream it on Spotify, also, but I'm not going to lie...I have never actively used that platform, so I am not 100% sure about that.

If you are into bands that like to do their own takes on the grunge/hard alt-rock sound, a la Emperors & Elephants, Stardog Champion, I have a strong hunch you are going to like what Wicked Garden has to offer.  I am anxiously awaiting the full-length release to dig more into what this band is all about.

Rating:  Its tough to rate just three songs, but these three definitely crank in the 7.5 range.

Back To Reviews Index
Posted by arttieTHE1manparty at 3:58 PM