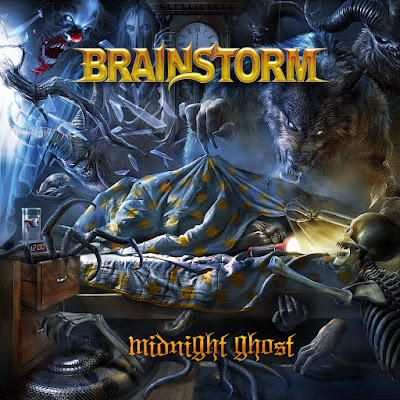 Since I first discovered this German power metal band on their 2001 album Metus Mortis, Brainstorm has probably been the most consistent power metal band that I have followed.  I suppose this can be attributed, at least in part, to the consistency of the line-up, which has remained 4/5 steady since Franck came on board in 2000, with bassist Ieva being the "newbie" of the group, not coming on board until 2007.  So, if you are doing the quick math, that means this current version of Brainstorm has been together for a full 12 years, which is a rather considerable time for a band to stay together these days.

Of course, consistency in a line-up means very little if the musicianship is not in top form, which has never been an issue for Brainstorm.  Combining the underappreciated vocals of Franck with the blistering fret speed of Ihlenfeld and Loncaric would be enough to bolster any metal band's line-up, but when you take in the sprinter-speed footwork of Bernert on the drums, and the galloping bass approach that Ieva brings, you have a nearly unstoppable force, musically.  And with top-of-the-heap songwriting, Brainstorm has long been one of the two or three standard bearers of power metal, in my opinion.

As is typical of the band, Midnight Ghost is filled with breakneck speed, incredibly thick note density, an impeccable sense of melody, and huge...HUGE...hooks, both vocally and musically.  Fast, heavy, and aggressive, Midnight Ghost actually manages to take the band to a new level of excellence, a statement that I thought might not be possible following the greatness that was 2014's Firesoul...or 2005's Liquid Monster, which many fans point to as the previous pinnacle for the band.

From the very first drum kicks of "Devil's Eye", there is an aggression to Midnight Ghost that may have been at least somewhat lacking on the last couple of albums.  Bernert is a sheer heart attack waiting with the pace he sets on this track (and throughout the record), but the tandem of Ihlenfeld and Loncaric are equal to the task here, which is a rather amazing statement to make, honestly.  And its not just the sheer speed that Bernert plays with, it is the interesting and change of tempos and rhythms that he mixes into each track that really provides the heartbeat for this band.


But its not just blazing speed that makes Brainstorm the great band that it is.  You need look no further than the second track, "Revealing The Darkness" to find a haunting intro featuring piano and strings that bleeds into a guitar riff that carries on throughout the track, weaving an intricate melodic thread throughout the song.  Franck's vocals range from a thick, rich baritone to a somewhat higher ranged tenor, never straying into territory where his power and command are lost.

"Ravenous Minds" is a crushing, metallic assault, not so much in tempo as much as in heaviness and crunch.  I'm not a huge fan of the effects used on Franck's vocals on the chorus that intros the song, but fortunately those effects are a one-time thing, and it is just clean vocals utilized for the rest of the track.  Big, chunky rhythm guitars are buoyed by a current of keys that tinkle just below the surface, adding a nice melodic contrast, and Ieva's bass work is especially present here.  The twin guitar riffing on the solo is especially enticing, and the sharp snare and thunderous kicks from Bernert keep me absolutely riveted upon repeated listens.

Two tracks really boil down the greatness of this album for me, although everything here is of excellent quality.  But the album's epic track, "Jeanne Boulet (1764)", which clocks in at nearly eight minutes, may be the show-stealer.  A thunderstorm, a haunting church bell, and a snarling narrative from Franck lead in this song that would seem to be about a true-to-life French girl who, in 1764, was among a number of teen-aged children and women who were killed by a "horrible beast", believed to be a large wolf (or possibly a pack of wolves) in the region during a stretch of time from 1762-1767.  (Sorry...the history teacher in me had to do some research!)  The telling of the story seems to be a bit erroneous in the song, however, as this Jeanne Boulet is apparently being sacrificed for some unknown crime...in the same year as the ACTUAL Jeanne Boulet.  Hmmmm....  Regardless of the historical accuracy, the tale told in the song is an excellent one and performed in fine fashion, with Franck masterfully manipulating his voice to fit the emotion of the song, especially when he dramatically intones "sacrifice her!", while the guitar playing is powerful, melodic, and chock full of hooks.  Tempo changes, multiple guitar solos, huge drums...this track has it all!  Don't believe me?  Feast your ears below...


The other track I would steer you to as an example of the band's greatness would be the penultimate track on Midnight Ghost, "Haunting Voices".  The chug-chugga-chug rhythm guitars, the raspiness that Franck adds to his voice in sections of the verses (think Mike Howe of Metal Church, for comparison), the big, harmonious, layered chorus sections, and the hook-laden melody of the guitars is, for me, exactly what I think of when I think of Brainstorm.  The change in drum patterns from verse to chorus are spot-on perfection, and the deep, snarling vocal bridge before the guitar solo, only add to the greatness of the track.


The album closes on another great song, with "The Path", a track that upon first listen reminds me a bit of something Demons & Wizards may have put together, with the more melodic approach of Blind Guardian interspersed with heavy, thunderous Iced Earth moments.  Again, thick layers of backing vocals support Franck on the chorus, only adding the the raw power that he possesses.  I truly feel he is one of the best vocalists in all of metal today (and, really, for the past fifteen or so years), and his perfect handling of the heavy, simple-yet-deadly riffs that Ihlenfeld and Loncaric attack each song with is merely more proof of that greatness.

And, while mentioning greatness, I contend that Dieter Bernert is quite possibly the most talented, and certainly the most interesting, drummer in power metal today.  I find myself focusing so much on his performance on this record (and on most of Brainstorm's albums, really), that I have to restart songs sometimes to get the full effect of the track.  That is saying something, my friends, for I would say I am generally a vocalist-first, rhythm guitar-second, drums-third listener, with lead guitars, bass, and then keys following in that order (I think a killer rhythm guitar can cover up a good deal of weakness in lead guitars...see Iced Earth as an example...).  That is not the case here, as Bernert captivates me with his originality, force, and speed nearly every time I put in an album by the band.

The production here is really good overall, with generally great separation of instruments, although there are a couple of spots where I felt the bass could have possibly been brought forward just a tad.  There is no muddiness at all, however, and my one minor complaint could also be the result of my copy of the album being presented in mp3 format, which as we all know tends to compress things to varying degrees (depending upon the quality of the files).  I would expect that when I receive my physical CD of Midnight Ghost, any misgivings I may have had will slip away.

If Midnight Ghost is not the absolute best record in a string of really good-to-excellent records from this German powerhouse band, it is absolutely in the top three of their 12 album catalog.  Today, perhaps due to an excitement about new material, I would have to say Midnight Ghost is my new favorite from the band, but only time will tell if that impression remains.  And who knows...maybe the next Brainstorm album will knock all contenders from the ranks!

Back To Reviews Index
Posted by arttieTHE1manparty at 7:59 PM