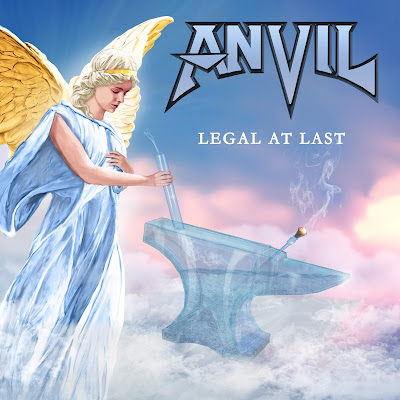 As hard as it may be to believe, 2018 marked the 40th anniversary of this Canadian metal machine, who just keeps on cranking out album after album, regardless of their success...or lack thereof...in the world of music.  They have a very specific style and sound that they have rarely strayed from, they have been named as major influences on big time bands, and they have a loyal and dedicated following that a lot of bands only dream about.  So, perhaps Anvil defines success differently than a lot of bands do, and that has typically been a good thing for fans of classic heavy metal with heavy doses of speed and thrash mixed in.  It certainly has worked on the majority of the band's albums, so how will it work out now on album number 18?

The album kicks off with the title track to the record, "Legal At Last".  But, while a hair metal or sleaze metal band of old would have been referring to some underage hottie, Anvil is referring to the fact that Canada has now legalized marijuana.  As such, the song naturally kicks off with the sound of someone hitting a bong.  When the actual music kicks in, it is classic Anvil all the way, with speedy guitar riffs and big, heavy drums jackhammering away through this uptempo rocker.  Lips still sounds largely like he did in the band's 80s heyday, although he may be a bit gruffer in places, which actually works well on the material the band has been putting out on the past few releases.  Now, while I am no prude, I have never partaken of the "all natural drug" that is the inspiration for this song (and the next), so I can't really relate to the song's subject matter, but I can relate to the music, which is pure Anvil from start to finish.

Being from the Cornhusker State, and proud of it, I was naturally intrigued by the song "Nabbed In Nebraska".  Apparently, the song is an autobiographical account of the band being arrested for possession of marijuana in Big Red Territory, which has not legalized weed.  Musically, this is exactly the kind of song people have come to associate with Anvil, with aggressive guitars, big, heavy drums, and a style that screams traditional heavy metal with its mid-tempo riffs and plodding bass line.  And, despite my anti-drug stance, I can't help but find a bit of humor in the tongue-in-cheek lyrics here.  I especially like the gang vocals used on the chorus, which adds just a bit more menacing sound to the humor of the song.  Check out the animated lyrics video below...

By the way, I have to ask...if there are signs saying "Drug Dogs On Duty" and "Nebraska Drug Control Ahead", can you really claim (lyrically) that "police lay in wait" as you cross from state to state?  Just asking...while smiling...

"Chemtrails" blurs the line between classic metal and thrash just a bit, which is not uncommon for this band.  The speed and aggression of the guitars is definitely here, and Reiner really hammers away at the kit on this track.  In fact, it's his drums that really give that thrashy feel to the track, along with the edgy vocals of Lips and the political slant of the lyrics.  To me, this is when Anvil has always been at their best, on the heavy, fast stuff.  Really, the only thing that keeps this song from fully crossing over into the thrash realm would be the lack of a blazing lead guitar solo.  Let's face it...Lips has become a really, really good rhythm player since the band reverted to a three-piece unit, and yes, he has shown some flashes of speed in some of his older, classic-era solos, but he has never been much above average as far as creative and catchy leads go (with a few exceptions), and this song, and really this whole album, is no different.  Perhaps if he only had to focus on leads things would be different.  Regardless, this is still a really good metal track, and, if you can get around the paranoia of the lyrics, this is one of the most enjoyable tracks on the album.

Just as quickly as things picked up pace with "Chemtrails", they are slowed back down to a plodding, dare I say doomy pace on "Gasoline".  To me, this is Anvil in Sabbath worship mode here, from the thick, sludgy tempo to the thumping bass line and the chug-chug-chugging guitars.  Lips takes his vocals down about a half-notch, especially on the chorus, and it is on a slow, churning song like this that his lead guitars actually really fit the pace and feel of the song.  For that reason, this is the perfect type of track for his style of guitar playing, but one or two songs like this from a band that is generally thought of as pre-thrash is really all that is necessary.  So, as long as "Gasoline" is the only track of its type on the record, I'm good with it.

"I'm Alive" picks the pace back up and injects a classic 70s metal feel into this uptempo rocker.  Once again, the rhythm guitars are top notch here, and Reiner, who I really think is an underrated talent on the drums, is the driving force behind this track.  The tones on the rhythm guitars here SCREAM "Cat Scratch Fever" by Nugent, but the guitar solo, while fairly fast and decently executed, is certainly not Nuge worthy.  All in all, another decent rocker with a classic feel that I enjoy.

"Talking To The Wall" and "Glass House" are two more tracks that fall perfectly into Anvil's wheelhouse, both heavy as stink with excellent drum work, grinding rhythm guitars, and a big, full sound despite the fact that we are dealing with a three-piece outfit here.  "Talking..." is the faster of the two tracks here, while "Glass House" is a bigger, thicker metal song, reminiscent of 80s-era Accept, especially with the gang choruses and that borderline power metal riffing.  Good, good stuff that I could listen to full albums of.  In fact, to me, it's stuff like this that really screams classic Anvil, as in Strength Of Steel, Pound For Pound and Forged In Fire-era stuff, which is when I really fell in love with the band.  Throw in the massively underheard Speed Of Sound record, and you have what I feel are the truly necessary albums from this legendary band, and tracks like "Talking To The Wall" and "Glass House" both are worthy of consideration with some of the best these albums have to offer.  (By the way...if you haven't heard Speed Of Sound, you need to IMMEDIATELY order/download a copy of that record as soon as you finish reading this review.  You will NOT be disappointed!!!)

Remember when I said one or two doomy, sludgy songs was enough for one Anvil album, as far as I was concerned?  Well, here is number two, as "Plastic In Paradise" lumbers along with a plodding riff and equally thundering drums, but with less heft than on "Gasoline".  In fact, this is definitely the lesser of the two tracks, although there are some fairly decent guitar antics from Lips on this one as he pulls out some whammy bar wizardry in a couple of spots.  I'd probably have cut this song from the fairly bloated 12 track list, but its not a skippable moment for me, nor will it be for most people.

As they previously did coming out of a slower number before, the band turns the tempo back up on high for "Bottom Line" and "Food For The Vulture", which may be the catchiest song title I have heard in a while, and is likely the best track on the record.  If "Bottom Line" borders on speed metal, "Food For The Vulture" crosses that border with lethal intent, as it is a full-on ripper of a track.  Once again, Anvil showcases why so many speed/thrash bands of the 80s point to this band as an influence.  The rhythm guitars and drums are relentless here, and once again, the days of high-speed classics like "Speed Of Sound" and "No Evil" come screaming back to me.

"Said And Done" slows things down to a sludgy drone for a few moments, but just before I am about to protest, the track slides more into traditional heavy metal territory, and all is right once again.  Not a bad track, but not a classic by any stretch, "Said And Done" finishes the album proper, before giving way to the "bonus track" of "No Time".  Now, if there are album versions that don't have "No Time", then avoid those and get the bonus track version, because this snarling speedster is well worth seeking out.  Again, this is classic feeling Anvil and a song that I am glad I stuck around for!  There is no way this should have been a bonus track, folks!  This is really, really good metal, again treading that speed/thrash line that Anvil seems to play so effortlessly!  The bass work of Robertson is particularly strong on this rocker, and I really like the drum sounds here.

Again, the album feels a bit bloated at 12 tracks, especially when none of the songs clocks in at under 3 minutes, and twice we have tracks that exceed 5 minutes.  I'd probably cut "Plastic In Paradise", and maybe even "Said And Done", to trim this back to a more manageable 10 tracks.  If the band really pushed the issue, I could see "Said And Done" becoming the bonus track here.

The production is really good, the instruments are clearly heard, and I like the tones of the guitars and the drums.  Yes, there is something of an 80s feel to the way the drums are mic'd, but I'm fine with that, as that era was the pinnacle of this band's now 18 album career (yes, you read that right!).  Every bit as good as 2016's Anvil Is Anvil, Legal At Last doesn't quite live up to the band's best, but it is certainly an excellent addition to the continuing legacy of a band that simply refuses to quit.  And that, my friends, is a good thing!

Rating:  Still cranking after all these years!  Crank this to 7.5!

Back To Reviews Index
Posted by arttieTHE1manparty at 7:04 PM