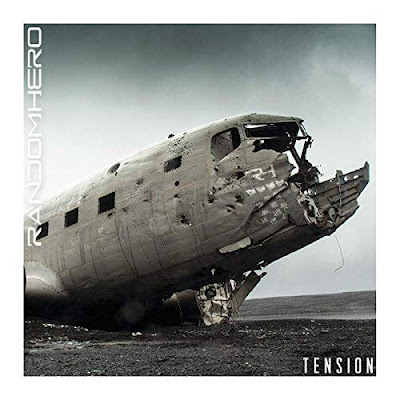 Denver's Random Hero is no stranger to mainstream success, at least on a limited scale, but they are quite possibly a stranger to you.  Despite the fact that they have had two mainstream rock Top 30 hits with the catchy rocker "Impossible", as well as "Running"...not to mention numerous other Top 5 charting Christian rock hits...most fans of the modern rock genre probably couldn't pick Random Hero out of a lineup.  They seek to change that with their latest effort, and first for RockFest Records, Tension.

The album kicks off with a boom-crash-boom-boom-crash from Madsen's drums, and we are off and running with "Desperate Measures", the uber-catchy, hook-laden opener.  The song is an absolute powerhouse, with pretty much everything a hard rock fan could want from a band these days:  strong vocals, a big drum presence, and aggressive guitar work.  What goes unnoticed by so many is the strong bass presence in this song, and nearly every other song on the record.  McDonough is a very competent bassist, staying on the drum's line when necessary, or straying outside the lines to create interesting textures and rhythms when called upon.  When you grab this record (which you definitely should do), take the time to seek out the sounds that McDonough drops into each song and see if you don't appreciate him even more.

"Motivation" is another catchy rocker based largely upon a snappy drum/percussion line to open things.  The chorus is the big hook for me on this one, as Watkins' big voice is used for the call portion of the chorus, while a more laid-back vocal approach is used for the reply sections.  Good, good stuff here, and that isn't even giving proper credit to the guitars being used so strongly on these chorus sections or the superb drum work on this track, with changing tempos and patterns being used throughout.

"Weight Of The World" is probably the most aggressive song on the record, with edgy guitars blazing the path to Watkins' vocals right from the outset of the song.  A song about heaping too much upon yourself and stressing yourself out in the process, the lyrics likely hit home for a lot of people in today's full-speed-ahead world.  With stress being a huge issue of this record, "Weight Of The World" has some of the most blunt lyrics, as Watkins sings, "Oh no, the panic in my heads getting hard to bury/Let go, Easier said than done./Am I extraordinary/Running on fumes, getting close to empty/Oh no, the Weight of the World is getting hard to carry!"Good, good stuff here, both musically and lyrically.

The album's title track and lead single, "Tension" is up next, and it is a perfect example of the growth of the band in the songwriting category.  Teaming with Josiah Prince, guitarist of Disciple, Watkins, Madsen, and McDonough craft a song that builds upon some introductory programmed elements, adding in rhythm guitars and drums, before Watkins jumps in.  A bed of programming and guitars burns beneath the verse sections, but its the big, soaring vocals on the chorus that are likely to grab the listener's attention the first few times through the song.  After the second chorus run, we get a big tempo change with a piano being added to the mix as Wakins calls out, "Am I going out of my mind?/My vision's blurry all the time/I know You see where I hide/But I'm just too scared to chase the Light."  Already a hit at Christian rock radio, this is a song that should be all over Sirius/XM's Octane channel, as it hits all the musical chords that crowd craves, while delivering a message that so many people of EVERY crowd needs to hear!

If I had one complaint about Tension, it would have to be the middle of the record, specifically "Outgrown" and "So Close".  The first feels like a blatant stab at the modern pop scene, coming closer to the electronically enhanced hip-hop style that someone like Manafest uses than what I would expect from a hard rock group.  I mean, we have electronic drums, layers of programmed synths, fingersnaps...just not what I would have expected to be dropped into the middle of an otherwise stellar record.  As to "So Close", it's not the song that is troublesome for me, it is its positioning on the record.  Putting two slower-tempo songs back to back nearly bogs the record down for me.  But, I also want to be fair in stating that I don't dislike either song...not at all.  For example, I have made no bones about the fact that I actually like a lot of what Manafest does, and "So Close" is performed exquisitely, with Watkins sounding exceptionally strong on the ballad.  I just don't understand the track listing order, I guess.  I think both songs would have been better served to be separated from each other.

Fortunately for the rockers that either stuck around or skipped ahead, the record rights itself in a big way, as "Public Enemy" is one of the really good tracks on a record chock full of good-to-great songs!  Marching style drums intro the track and Watkins applies a rhythmic approach to the verse sections to go right along with the drums.  The pre-chorus becomes a bit more melodic and less rhythmic, only to return to that cadenced vocal approach on the chorus.  A grinding guitar solo tears into the musical fabric after the second chorus, and the track's intensity picks up a bit from there until it comes to a conclusion.  I love the sparse nature of the chorus and the rhythmic approach taken to the song as a whole, and it's stuff like this that really sets Random Hero and Tension apart from a lot of other bands out there today.

"Set Free" is a more straight-ahead rocker with buzzsaw guitars and a solid rhythm section bolstering Watkins powerhouse vocals that range from singing to shouting on this one.  The backing vocals are also really strong here, which serve to make Watkins stand out that much more.  I usually find myself hitting repeat on this track when I put it on.

"The Sound" starts off with some programmed elements and some subtle effects used on Watkins vocals, giving the track a very modern sound but with a catchy riff and a sing along chorus.  This leads us to another of my favorites, the album's closer, "White Flag", which is a song all about surrendering to God.  The chorus is very catchy and the guitar solo here is among the best on the record as Labrosse does some serious string bending before the band jumps back in to make a final run through the vocally-layered chorus.  An impressive ending to a very impressive record.

I'm not sure how much the move to Rockfest Records influenced the style and sound of this record, but it certainly didn't hurt things.  Rockfest has been a beast of a label in 2019, and the production work done on Tension is top-notch.  The guitars retain their grittiness on most songs, and the voices of the instruments are all given room to be heard.  I honestly feared that Tension would sound over-produced, especially with how well it was received on the charts, because, let's face it, hard rock and metal are generally not well-received without some sort of concession in the sound of the band.  That is not the case with Tension, however, as Random Hero still sounds like Random Hero, and I think a lot of that has to be due to the fact that the producer, Kellen McGregor, has learned a thing or two about industry perceptions with his own band, Memphis May Fire.  Yes, there are some differences between this record and the band's previous effort, but that is what we call "growth".  And, in the end, Tension shows serious growth for the band, especially as songwriters.  Now, my only real question now is how is Random Hero going to top this?

Rating:  Definitely a crank-worthy release!  Crank it to 8!

Back To Review Index
Posted by arttieTHE1manparty at 12:15 PM