SCOTT STAPP "The Space Between The Shadows" 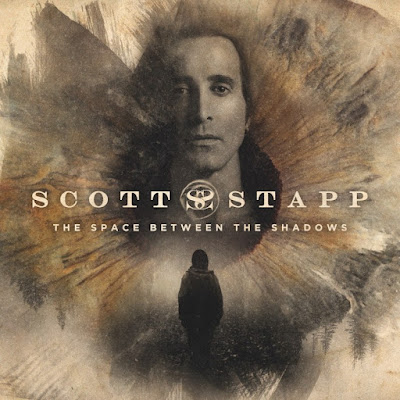 Whether you loved or hated him and his band, Creed, in the 1990s and early 2000s, Scott Stapp is one of the biggest, most recognizable voices of his generation.  Often considered an Eddie Vedder clone...which, for many, is NOT even close to a compliment...and despite the multitude of hits Creed strung together, the more than 50 million albums sold worldwide, and the multiple successful tours, Stapp, and by extension Creed, could not catch a break from the people who sought to slander them.  Some of that was, of course, the same thing that bands such as Nickelback, Pearl Jam, even Metallica, have faced as their careers skyrocketed and the pockets of people who "have been there since the band was nobody" became disenchanted that their own personal favorite band now belonged to millions.  But some of it was because of the demons Scott Stapp has fought against, fallen to, and then regrouped himself to fight against once again.  To be fair, Stapp has owned up to his failures, even opened up about them in his book, Sinner's Creed, and in numerous songs, including the powerful title track to the latest album by the band Art Of Anarchy, The Madness.  And, whether you love or hate him, the man continually feels called to keep writing, recording, and releasing new music to his fans, both as a part of his chosen profession, but also as a means of staying in touch with his fans and spreading a message of hope to those who seek it.

The Space Between The Shadows is Stapp's third solo album, following the multi-platinum success of  2005's The Great Divide, and the critical acclaim and Christian rock chart success of 2013's follow-up, Proof Of Life.  This new record, however, may be his most consistent musically and his most honest...perhaps even vulnerable...lyrically.

The album kicks off with a bang, as two of the first three songs are hard-edged rockers, with the second being a tough, mid-tempo snarler of a song.  "World I Used To Know" laments the state of the world we live in today, a world filled with hate and anger and division among people.  The track starts off with a howling wind and the sounds of a distorted radio talking about dark...perhaps apocalyptic...events taking place in the world.  There's a steady drum build then the explosion of guitars as the song kicks itself in.  Stapp sounds strong, smooth yet edgy, his voice unmistakable to anyone who listened to rock radio from about 1995 on.  The uncredited (more on that in a bit) is definitely strong, with special note given to the gritty, buzzsaw feel of the rhythm guitars and some really big sounding drums.  Stapp appears to be supplying his own backing vocals, which is neither good nor bad...it just is, and it works fine on a punchy rocker like this one.

That edgy, mid-tempo number I mentioned a second ago is up next, as "Name", finds Stapp reflecting upon his life as a young child abandoned by his father and the pain that abandonment caused.  More mid-tempo than ballad-esque, "Name" is truly autobiographical, as he sings,  "I was a child/I was abandoned/Too young to fight to have a say/Oh God what seemed so heavy handed/Made me the man I am today."  Later in the song, Stapp makes a promise to his own children that they will never know the pain that he experienced as "...a son without a father/He gave his name and walked away...".  This is also the track from which the album's title, The Space Between The Shadows, is referenced, when Stapp refers to himself as both the "space between the shadows" and the "light inside the sorrow" for his own children, something that he never had for himself.  Poignant and powerful stuff.

With the third track, the album really comes alive with the lead single, "Purpose For Pain", which is the pinnacle of the album, musically.  Bordering on metallic, "Purpose..." is one big guitar hook right from the start as the rhythm guitars swirl among the big, thundering drum crashes with hints of synthesizer providing some musical fill in the few gaps to be found in the track.  Stapp wails about how he "...Shut every door but the right one/I fought the devil...and he won" when singing about his addictions and personal demons.  The song is listed as the third biggest hit on www.christianrock.net for the 2019 year, and it is easy to see why.  A far heavier rocker than anything I can remember Creed doing, this song is a brilliant piece of modern hard rock and one that has found its way into my workout mix.  Check it below...

"Heaven In Me" slows things down significantly, as the album enters into ballad territory for the first time.  A largely acoustic track, "Heaven In Me" is about as far away from "Arms Wide Open" as it can get musically, yet in both cases, it was Stapp's voice that does the majority of the heavy lifting.  "Wake Up Call", however, is another ballad that finds itself leaning a bit more in the direction of Creed, particularly when a children's choir is interjected into the piano-driven song.  That the track manages to avoid becoming overly sappy is in large part due to the song's subject matter: finding your way back from your own personal turmoil and making a change for the better..."if you want to/This is your Wake Up Call/And you can change it all/If you want to...".

There is plenty of punch to keep things moving along through the first ten tracks, however, with "Face Of The Sun" being a catchy, positive rocker, and "Survivor" hits hard and heavy as a bottom heavy riff-rocker with a message of never quitting on oneself or letting anyone deter you from moving forward, as Stapp snarls, "I'll never bow down/Never own defeat/Cuz you messed with a fighter/I stand here, Baptized by the fire/A Survivor".  Sounds like the kind of call-to-arms anthem that Skillet might have placed on their latest effort, Victorious, but outside of the lyrical direction, the song styles really aren't all that similar.

While I tend to gravitate towards the harder/heavier moments of an album, those aren't always my favorite tracks on any given disc.  As such, on Space Between The Shadows, my three favorite tracks on the album would be the rockers "Purpose For Pain" and "Survivor", and the the slower (not really a ballad), powerhouse of a song that is "Red Clouds".  This song is huge in its sound, and Stapp really delivers a vocal performance to match the style and scope of the track.  Probably the most "Creed-like" song on the record, it still has a heaviness and urgency that Creed hadn't really had, at least on any of their singles, since the My Own Prison days.  Stapp really seems to be pondering the state of the world in "Red Clouds" as he opines, "These are the days we live in/Sliding, winding, finding our way through the maze/The times of the unforgiven/The Light inside it slowly fades away"...and that's just the first verse.  For those who question where Stapp is at spiritually on this record, the chorus seems to answer that question, as he sings, "Reign down/Reign down/Red Clouds/Wash over me/Reign down/Reign down/Red clouds/Come and set me free".  For those who may miss the meaning, "Reign" would seem to refer to Christ coming to Earth to set up his reign, while "Red clouds" seems to be a reference to events in the Bible book of Revelations.

"Gone Too Soon"is a song of mourning for the loss of people who, as the title implies, have left us, seemingly before their time.  The video for this song incorporates images of Prince, Soundgarden's Chris Cornell, and Linkin Park's Chester Bennington, along with soldiers at war, and people visiting the grave sites of those they have lost.  Yet, when you really listen to the lyrics you soon discover that the mourning feeling of the song is gone after verse one, and the song gives way to a message of hope that we will be rejoined with those that we have lost.  Stapp really delivers vocally here, especially when he pours his emotions into the last few lines, when he belts out, "Gone too soon, my friend/I know you're dancing with angels on the wind/Its not the end/Until I reach forever/And we're together...".

"Ready To Love" isn't a power ballad or anything, but it is definitely a much slower song than "Purpose For Pain" or "World I Used To Know", and the incorporation of strings in the track gives it an epic ballad feel, which would have made for the perfect album closer, except this isn't where the record concludes, as there are two "bonus tracks".  I give that term the quotations treatment, because I have yet to find a version of this album without the bonus tracks, although I am told that there is a version with just ten cuts.  If that is truly the case, then I would avoid that version and find this one, because the two "bonus tracks" are among the strongest on the record.  "Mary's Crying" is a poppier mid-tempo track with a strong message and some of Stapp's best singing, and "Last Hallelujah" is a heavier, plodding mid-tempo number, similar to "Red Clouds" in style and tempo, but with a bit less darkness to the sound.  Again, a strong lyrical message and a great performance from Stapp really pushes this song for me, and I find myself repeating this track every now and then...which, to be fair, I do with "Purpose..." and "Red Clouds", also.

The packaging is pretty solid, overall, although I am still a fan of the old-school jewel case as opposed to digipacks.  That issue aside, the booklet contains full lyrics and writing credits for each song, as well as a thank you section and the typical production credits.  What it DOESN'T include, however, is credit for who plays what instrument on the album.  Unless I have completely missed it somewhere, I can't find a single name of a guitarist or drummer or anything.  I have to wonder if Escape The Fate's guitar player, Kevin "Thrasher" Gruft plays on the album as he is thanked in the credits.  It's also worth noting that Stapp give special, specific credit to Aerosmith's Steven Tyler "for giving me hope and teaching me to 'pass it on'".

This is a powerful album, musically and especially lyrically.  To say that it is not Stapp's finest post-Creed effort is foolish; to say that it is his best effort ever is possible.  The sad thing is that there will be those who deny themselves the opportunity to hear this great record simply because they continue to do the once-trendy thing of bashing the man and his former band, largely because of their success.  That is their loss, however.  It doesn't need to be yours.  Get The Space Between The Shadows and see if you can't find something to love about this album.

Rating:  Love him or hate him, this album is crankable!  Crank The Space Between The Shadows to 9.