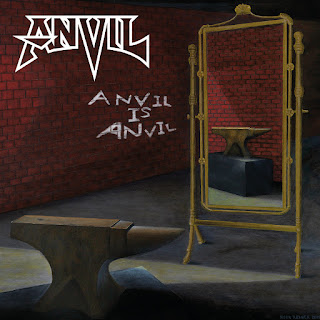 There may not be a more appropriately titled album in the history of metal...maybe even in music.  Why do I say that?  Because, quite simply, Anvil IS Anvil, here and on every album they have ever released.  They don't try to sound like anyone else.  They don't trend-jump.  They don't compromise.  Anvil IS Anvil, period.  And why shouldn't they be?  They've been listed as influences of practically all the major thrash bands of the 80's, including Metallica, Anthrax, Slayer, Megadeth...collectively known as the "Big Four"...as well as countless other bands.  So why would they change now?  Well, other than a COMPLETE lack of commercial success, there really is no reason to change, so they haven't...and I'm guessing they won't.

Without going into the history of the band too deeply, or rehashing the award-winning documentary made about the band, Anvil now consists of founding members Lips and Robb Reiner, and new bassist, "Christ" Robertson, and the Canadian metal legends continue to make traditional thrash-tinged heavy metal in the same vein that they have for the past 30+ years.  They sound much the same in 2016 as they did when I stumbled across them on a Metal Blade sampler in 1987 and fell in love with the song "Concrete Jungle" off the Strength Of Steel record.  On top of it, they sound like they are still having a great time doing what they do, which really makes all the difference in the world when you are a band that has played in front of crowds ranging from...literally...15 people to 15,000.

The band enlisted the help of U.D.O. producer Martin "Mattes" Pfeiffer to help them coax the most out of these new songs, but there are no studio tricks, no keyboards or synthesizers, no guest vocalists or musicians here to detract from the true Anvil sound.  Lips sense of humor is still firmly intact here, which is noticeable right from the get-go as the band launches into a metallic sea shanty called "Daggers And Rum".  The sounds of the sea and the chanting of pirates intros the songs before Reiner's drums come pounding forward and Lips' thrashy rhythm guitars come screeching to life.  Immediately, Robertson's presence is felt here, as a nice rumbling bass line keeps the forward march of the song going fiercely onward as Lips snarls about "scurvy scum", "cannon balls", and "treasure"...which no pirate song would be complete without!

Oddly, Lips also decides to get a blatantly social and political on this record, which I don't remember the band really doing back when I followed them fairly regularly.  (Like most of the world, I lost track of them in the 90's...).  Take for instance a song like the doomy, Sabbath-y sounding "Gun Control", which is NEVER going to serve as the theme song for the NRA as it takes a decidedly anti-gun stance and a swipe at Americans who stand behind their Constitutional right to own firearms...which is a bit of a bold move from a Canadian band!  He also lashes out at religion in "Die For A Lie", with such seemingly anti-Christian lyrics as "Die for a lie, living by the book" (I suppose it could also be construed as anti-Muslim).  "Forgive Don't Forget" is also a bit of a political song as it was written by the Jewish Lips for the people of Germany, where the record was recorded.  Even on a much more Anvil-like, humorous song like "Zombie Apocalypse", the song takes an anti-nuclear war slant that, in all honesty, comes across as rather dated in this post-Cold War era.

What doesn't sound dated is Anvil's music.  Sure, it's still 80s-inspired thrash and heavy metal, but its given a fresh coat of 2016 paint in the production, much heavier in the bottom end and much fuller in sound than anything they did in the 80s or on the couple of 90s albums I have tracked down over the past couple of years.  Pfeiffer keeps the historic metal in Anvil's performance, to be sure, but he also drags the music into the 21st Century without sacrificing the band's sound.

When Anvil just cuts loose is where this record shines the most, in my opinion.  The previously mentioned "Daggers And Rum" is one such track that showcases the band just having fun, as does "Zombie Apocalypse", despite its veiled political ambitions.  In fact, "Zombie Apocalypse" has some absolutely killer bass work in it, a HUGE, heavy-as-stink plodding rhythm, and some trippy guitar effects that really add to the horror show soundtrack feel of the song and make it stand out as one of my favorites.  I mean, seriously, can't you just hear the herds of walkers from Walking Dead plodding along, growling and snarling the insanely simplistic chorus of "Zombie, zombie, zombie, zombie apocalypse"?!  Awesome fun!  "Up Down Sideways" showcases some pretty cool bass work from Roberson, while "It's Your Move" is pure heaviness and lets Reiner just beat the crap out of his kit for three and a half straight minutes of pure skull crushing metal.  "Ambushed", is nearly as notable for it's furiously heavy assault on the ears and neck. "Fire On The Highway" is somewhat disjointed in the way the lyrics are structured, but the relentless machine gunning of Reiner's drums and the nicely synced chugga-chug of Robertson's bass and Lips' guitar give thrashers another reason to celebrate the return of this band. "Run Like Hell" is another high-octane dose of speed and adrenaline that will have mosh pits swirling at live shows (if there are enough people there to actually form a mosh pit), and what has to be the band's personal statement song, "Never Going To Stop" thrashes wildly from start to finish, with Reiner really dominating the song with his double bass work that truly sets him apart from so many other metal drummers out there, both past and present.

Not every song here is a winner, but that's okay.  For every so-so track like "Runaway Train", there's another really good song to back it up.  "You Don't Know What It's Like" is not a particularly well-constructed song, and the backing vocals on the chorus seem completely out of sync with the lead vocals, but moments like this are relatively few and insignificant.  Sure, this could have been cut down to 9 songs relatively easily, making for a tighter, more cohesive sounding overall product, but hey, this is Anvil.  Who knows if they're going to get another chance to record an album, right?  Just as well get everything on tape (er, digital recorder) that you can.

But then again, this IS Anvil, so it is actually VERY likely they will be back for another round, even if only 50 people buy the record and only 20 of those show up to see them play.  And that's the beauty and the sheer joy of a band like Anvil.

The packaging is solid, by the way, on this Pledge Music-funded project. with all lyrics and a band photo included in a 12 page booklet that also includes the requisite thank-yous and production credits.  The package itself is a cardboard digipack with a sleeve for the lyrics sheet, but at least its of the style that has an actual tray for the CD to snap into.  Additionally, since I was a backer of the project, my copy of Anvil Is Anvil is autographed, which is cool.

Rating:  Anvil Is Anvil is Crankable.  A solid 7.5 is in order here!

Posted by arttieTHE1manparty at 3:49 PM