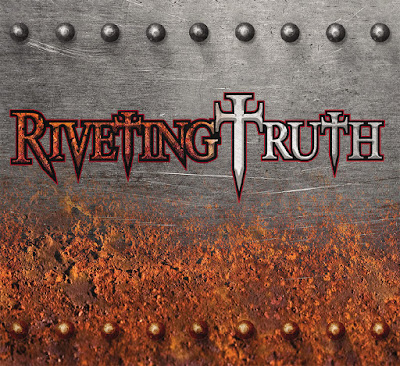 (c) 2020 Roxx Records
Dave Bentley--Lead Vocals, Guitars
Andrew Rudd--Bass
Guest Musicians
Dennis Cameron (Angelica)--Guitar Solo on "The Prison"
Rex Carroll (Whitecross/King James) Guitar Solo on "Stand Trial"
Chris McNeil--Drums
Canadian duo Riveting Truth manage to sneak their new EP out on Roxx Records just in time for the holidays, and anyone who gets this little slab of melodic hard rock under their Christmas tree or in their stocking are going to be very happy with Santa!  Founded in 2017 from the remnants of Ontario Christian metal band Legacy, Riveting Truth is part guitar-driven melodic hard rock with excellent lead vocals and strong songwriting, and part edgy, snarly, thrashy metal...all in just four songs!  Regardless of the style the duo chooses to play, however, expect impressive musicianship all the way through, as well as deep, thoughtful lyrics.
The EP kicks off with the lead single, "The Prison", and the power of this little record is felt immediately.  With a definite bottom-heavy groove rumbling through the track, "The Prison" is a metal-tinged, hard rocking track that sets the tone for everything that follows.  Rudd's bass is present throughout the song, establishing a thick bottom end for the rhythm guitars of Bentley to drive the song.  Bentley also possesses a strong, lower-tenor range voice with a bit of an edge at times. The layered backing vocals, particularly on the chorus section, combined with that strong bass presence give this song a Kings X feel at times, but I enjoy the vocals here far more.  After the second chorus, Bentley shouts "DC!", and the shredding of Dennis Cameron of Angelica fame erupts!  I'm not 100% certain that Cameron plays the entire solo, as it is split into two parts...one more shred-oriented and one more melodic in its style...so perhaps Bentley handles the second half of this really nice solo break.  Regardless, "The Prison" is a really good, uptempo rocker that sets the table well for this effort.  Yes, there are a couple of sound effects here (most notably the slamming of a prison cell door at the end), but there are no obvious keys or synths at work here; just two men, their guitars, and their voices.  Lyrically, these guys take a strong stand for their faith, as well, without beating the listener over the head.  Check out the lyric video below to both hear the greatness of the music and to follow along with what the guys have to say...
As good as "The Prison" is, "Stand Trial" is even better.  Slightly slower, but still powering straight forward with edgy guitars and that powerful bass of Rudd, "Stand Trial" is darker and heavier than its predecessor, and Bentley adjusts his vocals to fit the mood perfectly.  Rex Carroll of Whitecross and King James fame is brought on board for the solo this time...and the man doesn't disappoint.  Rex's guitars explode all over this track, and while I don't have a credits sheet in my promo copy, it sounds to me like he not only plays the big solo in the middle but also the frantic fret work that outros the song, as well.  I really, really like this track a lot and have already added it to a playlist of my favorite tracks for 2020.
From here, the band shifts styles a bit.  "Skeletons In The Closet" is another dark hard rock tune, but it is going to throw some people as it uses a lot of lower-registered spoken word (or perhaps snarled word is more accurate) vocals to drive home the message.  It reminds me a lot of stuff that legendary Christian rockers, Bride, have done in the past.  In fact, even when he is singing here, Bentley retains a bit of that Bride quality that Dale Thompson utilized so much back in the day.  No, he doesn't hit the piercing siren wails that Thompson did, but he has that haunting snarl down pat, and it works well.  Once again, I can't say enough about Rudd's bass work on this track as it is truly a driving force throughout the song and the entire EP.  The rhythm guitars are solid and though there is no real lead guitar solo, the song doesn't hinge on that type of musicianship, as it combines a grungy style with its melodic sensibilities.  It took me a couple of spins, but I really like this track, also.
"Give Up The Ghost" closes things out and it brings everything to the table as far as influences of the band.  The Bride comparison is still there, especially with a track such as this that brings thrash-styled drums and rhythm playing intermixed with a searing lead solo that shows that Bentley is no slouch on the guitar himself.  There's also a big tempo change after the second run through the hyper-simplistic chorus section that finds the band slowing things down and bringing a sludgy-yet-melodic style to the mid-section of the song, similar to something Alice In Chains has done in the past.  This is a tough song to pigeonhole stylistically, and as the shortest song on the EP, it packs a lot of variety and variance into just over 3 minutes.  Definitely an intriguing song, and like its predecessor, it was a grower for me, but after enough spins, I found myself really, really liking this song.  In fact, it also made its way into a playlist on my computer, as I dropped this into my workout/weight-lifting playlist that is comprised of mostly metalcore and thrash.

The production is solid here; not polished or shiny, but with the variance of styles, it really shouldn't be.  The instruments get a lot of room to work here, especially Rudd's top-notch bass work, and the guest guitar solos meld flawlessly into the mix of both songs.  A special nod has to be given to drummer Chris McNeill, who handles all the various styles and tempos in amazing fashion!  All the more impressive is the fact that McNeill is probably best known for his nearly two decades behind the kit in Glass Tiger...yes, THAT Glass Tiger...who while catchy, are decidedly NOT metal!  You would never know it with the machine-like drumming that McNeill lays down on this record, flawlessly changing tempos and bouncing between styles seemingly without effort!  I'm not sure if McNeill is someone the guys can round out their band with, but even if they don't, they certainly show that they are capable of delivering solid hard rock/metal music on Riveting Truth, and I am sure the addition of a drummer would be an undertaking the guys took very seriously before moving forward.

Very short at less than 18 minutes, the time factor hurts this EP a bit, but Roxx has the EP special priced at just $7.77 right now, so if you want to snag a copy, head over to www.roxxrecords.com to pre-order now.

Rating:  I generally hate rating EPs due to their brevity, and the style changes on this one will throw some people, no doubt.  Still, I crank this to a 7, as Riveting Truth handles both the melodic hard rock and the heavy/thrashy metallic styles equally well.  Definitely an eye-opening debut.

Posted by arttieTHE1manparty at 10:26 AM