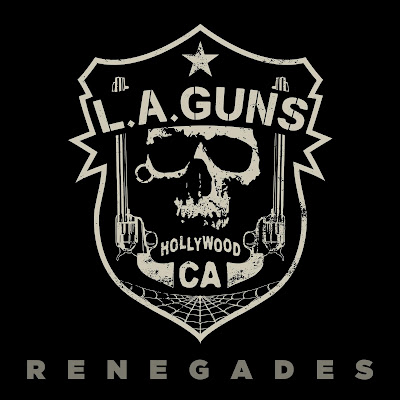 (c) 2020 Golden Robot Records
Kurt Frohlich--Lead Vocals, Rhythm Guitars
Scott Griffin--Lead Guitars
Kelly Nickels--Bass, Backing Vocals
Steve Riley--Drums, Percussion
Here we go again.  LA Guns is, once again, making me add in things like "Steve Riley's version" to the name of the band, as somehow we continue to have two completely different and distinct versions of the band competing with one another, yet apparently no one, not even band namesake Tracii Guns, actually owns the rights to the name.  So, lest anyone make the mistake of thinking the band has somehow reunited for the three-hundredth time, I want to make things completely clear: this LA Guns is the Steve Riley/Kelly Nickels version of the band, NOT the Phil Lewis/Tracii Guns version of the band.  If you are somehow still confused, trust me when I say you will not be confused once the music starts, as this version of the band is definitely not on the same level as the other.

That is not to say this LA Guns is bad, they just don't really sound like LA Guns.  A lot of that has to do with the fact that Kurt Frohlich sounds very little like Phil Lewis, and Scott Griffin, who is a very talented guitarist in his own right, doesn't sound all that much like Tracii Guns with his style and approach.  Additionally, the songwriting approach of this version of the band is less Hollywood sleaze and more straight-ahead, gritty hard rock.  Oh sure, there are some notable tunes here, but don't look for a "Sex Action", "Ballad of Jayne", "Rip And Tear" or "Malaria", as that classic sound is generally not to be found on this record.

The album kicks off with the lead single, "Crawl", which is definitely one of the best tracks on the record and starts things off on a good note.  While not a "classic" LA Guns sounding track, it isn't far off, at least as far as the bones of the song go, from the dirty rhythm guitars to the tight playing from both Riley and Nickels.  But there is something not quite sleazy enough, not punkish enough to be a full-blown LA Guns track.  And no, I'm not asking for a rehash of that 1987-91 classic sound from the first three records, but I am asking that the band sound at least akin to their namesake.  "Crawl" has some nice guitar work from Griffin (formely Ratt's bassist), and its no surprise that Nickels and Riley are absolutely rock solid here, but their are some distinct differences that hold this track back.  First, God bless him, but Frohlich just doesn't have Lewis's vocal prowess; there's no spit, no sneer, no snarl.  Granted, I'm willing to be Frohlich is a better SINGER, but he is not the VOCALIST that Lewis is, at least for the style of music LA Guns is associated with.  Secondly, where the heck is the down-n-dirty guitar solo?!  Nickels lays into an extended bass run that could be classified as a solo, I suppose, but where the heck is Griffin?  He never steps up and just blazes his way through the string-melter that you know Tracii would have slathered all over this song.  In fact, for me, that missing guitar solo is really what takes this song down a notch from being a potentially great tune to just a pretty good one.  Check it out and see if you don't agree.

"Why Ask Why" picks up the pace just a bit, and Griffin comes more prepared to play on this track, even ripping through a couple of nice lead runs, both after the second chorus and on the outro of the song, but again, the lack of Lewis is seriously felt here.  On the verse sections, Frohlich sounds more like a higher-registered Sully Erna from Godsmack than he does the frontman for LA Guns, and on the chorus, things are just way too smooth. Again, a pretty good song, just nothing that is going to stick with me for very long.

And so goes much of the record.  "Well Oiled Machine" really had me feeling pretty jazzed at the outset, only to have the weak chorus and predictable song structure leave me seriously wanting.  The rhythm riffs hint at classic LA Guns, but the rest of the song is a letdown after a promising start.  "Lost Boys" drops into mid-tempo territory on the verse sections then kicking things up a notch on the chorus sections, but those choruses are just so...weak? lame? tired? lyrically, and lack energy in the performance.  At one point, the song feels more like a lesser version of the classic MSG tune "Anytime" than it does something that should end up on an LA Guns record.  Griffin offers up one of his best solos here, no question, and again Nickels and Riley are every bit the rhythm section you would expect of two such-seasoned veterans, but the song is just not there.

"You Can't Walk Away" slows things down to near ballad territory and is one of the better tracks on the record, but not for the reason you might expect.  It's not because mental images of "The Ballad of Jayne" are conjured up.  No, it's because this sounds for all the world to me like a song written by and for...Tesla.  Honestly, if Tesla were to record this song 30 years ago, I think it not only makes an album, but it might even get released as a single.  I really, really like this song and Jeff Keith would have NAILED this song's style and delivery.  In fact, if I close my eyes and really try, I can make myself hear this on Psychotic Supper as it has a kind of "Song And Emotion" feel to it.  An honestly great song to my ears, just not for this band.

"Witchcraft" is a nice, dirty rocker that probably comes the closest to capturing the spirit and sound of classic LA Guns, and Griffin is likely at his peak here as a lead player.  There's even an edge to Frohlich's vocals that really doesn't show up for most of the record that really adds to the song.  And while still overly simple, the chorus has a sleazy sass to it that nothing else on this record really has, which helps the overall feel of the track immensely.  So, two of the three best songs come back-to-back on the record here, but they are buried in the middle of an album that a lot of people will likely have given up by now.  And in both cases, you can't help but know in your gut that the Lewis/Guns version would have performed these songs better.

"All That You Are" is just not a good song, despite the best efforts of Nickels who delivers some excellent bass work here.  From all the "na na nas" and "hey! hey!s" to the overly extended "cry-e-i-e-i-e-in'" the lyrics are forgettable and their delivery...including the compressed, cliched "singing into a megaphone" delivery is so below LA Guns standards that the song makes me cringe.  Riley sounds bored, quite honestly, and Griffin is again relegated to more of a gun-for-hire role as the lead player than the de-facto guitar god that an LA Guns player should be.

Things don't really pick up with "Would", either.  In fact, as a largely acoustic ballad, it would be nearly impossible for "Would" to be a pick up, but you know what I'm getting at.  Once again, not a terrible song, but this is just so not an LA Guns song.  There's just nothing meaty to grab hold of here, which is a shame, because the performances aren't terrible.  In fact, I like the music of this track which I really think would fit nicely into an Alice In Chains acoustic record, where you would expect something moody like this to show up.  Overall,  if nothing else, songs like this one, like "All That You Are", like "Well Oiled Machine" really show how much the Riley/Nickels version of the band pales in comparison to the Lewis/Guns version in the songwriting category.  It's really not even close, honestly.

"Renegades" should be a daring, snarling song, but it absolutely is not.  In fact, despite the fact that it is the title track, this has to be one of the most bland songs on the album and is completely forgettable.  "Don't Wanna Know" brings the record to a close with a Guns N Roses kind of vibe...minus the big Slash solo...and is one of the songs that fits into the best half of the record, but it is far too late to do anything to salvage this album.

Overall, this isn't a terrible record, it's just not a really good record, and definitely NOT an LA Guns record for the most part.  It's a generally solid listen with a couple of really good tracks and a handful of decent tunes, but a few songs find the band going through the motions and a couple are just flat-out misses for me.  The production is good, overall, and the musicianship is above average, as well.  The feel is just not LA Guns, however, and that is going to turn a lot of people off and likely cause them to distance themselves from this version of the band in the future.  Would I go see the Riley/Nickels version of the band live?  Probably once, just to see how Frohlich handles Lewis' vocals in the live setting, but I wouldn't be going to hear these new tunes.  On the other hand, I would go see the Lewis/Guns version anytime, not just to hear the classics, but to hear the great new stuff they have released on their latest efforts, The Missing Peace and The Devil You Know.  And, I guess therein lies a big chunk of the difference.

Rating:  Rock this to a solid, if unspectacular 5.5 and wait to see how the other version of the band responds.