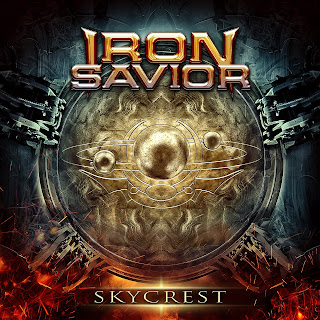 (c) 2020 AFM Records
Piet Sielck--Lead Vocals, Guitars
Joachim "Piesel" Kustner--Guitars
Jan S. Echert--Bass
Patrick Klose--Drums
Ah, Iron Savior.  If ever there was a guilty pleasure band for me, Iron Savior would have to be it, and I make no bones about that fact.  If Iron Savior releases an album (and Skycrest is now album number 13, believe it or not!) I will be there to pick it up, no question.  I simply love what mastermind Piet Sielck and his band bring to the table seemingly each and every time they put out new music.  And, perhaps unsurprisingly, Skycrest continues in that vein as the German metal machine has unleashed yet another molten slab of power and speed.
Retaining the same line-up since 2017 (with all but Klose having been involved in the band at some point since 2000), Iron Savior has forged a musical chemistry that bleeds into each of these songs.  Is there a formula to what the band does?  Absolutely.  Doesn't that lead to staleness or stagnation?  Not at all.  Nothing on Skycrest sounds like a rehashed version of a song from Kill Or Be Killed, Battering Ram, or the classic Condition Red.  Sure, you know beyond the shadow of a doubt that this is Iron Savior that you are listening to, but that is largely a product of Sielck's unmistakable voice and the power anthems that the band delivers time and time again.  Heavy, crunchy, edgy, and more often than not, fast as hell, Iron Savior's music simply delivers every time out, and Skycrest is no exception.
The album kicks off with "The Guardian", which is about as close to a musical slip-up as the band makes on this album.  Why?  Quite simply, I don't like intros, something that I have never hidden from anyone who reads this site with any regularity.  Checking in at 77 seconds, "The Guardian" sounds a lot like something you might hear from Pretty Maids musically (and there is NOTHING wrong with that!), but it doesn't do much other than set the stage for the title track which comes blowing out of your speakers on a metallic mission!  "Skycrest" is all galloping drums, chugging rhythm guitars, and Sielck's gravelly vocals that both soar and snarl at the same time!  I love what Klose brings to the band with his cymbal-punishing drum attack, and the guitar trade-off between Sielck and Kustner is glorious to hear.  And we are only on the first real track of the album!
"Our Time Has Come" has a definite throwback feel to the first few introductory chords, and I found myself in love with the track within about 15 seconds!  Melodic yet still speedy and crunchy, "Our Time Has Come" is the type of song that fans of the band have come to expect, with "save the world" lyrics...motivational and cheesy all in one...and the blazing guitar solo that we all know is coming, set to a breakneck pace driven by machinegun drumming and a blistering bass line that likely leaves Echert's fingers smoking by the time the song has concluded!
The majority of the rest of the album is exactly what you have likely come to expect, and love, from Iron Savior.  This is punchy, fast, sometimes lyrically-cheesy-yet-satisfying power metal that you either love or hate.  Period.  There really isn't much room for anything in between, as Iron Savior does what Iron Savior does better than just about anyone out there today.  From the blazing guitars and thundering drums of metal anthem "Hellbreaker", to the snappy drums and screaming guitars of "There Can Be Only One", to the smoother-yet-still-heavy "Raise The Flag", a song literally about heavy metal, Iron Savior delivers straight-forward music for the metal crowd.  This is metal: heavy, power metal, pure and simple.  Not hard rock, not modern rock, not something "core"...just metal.  This is not music that is designed to hit the radio, it is music that is designed to be played loud in the hardcore gyms and garages and dive bars and smaller concert venues where the blue collar metal fans can still be found.  Big, soaring backing vocals beef up these metallic overtures, backing up the Udo-esque snarl of Sielck, and the blistering guitars...whether rhythm guitars or searing solos...are some of the best and most underrated in metal today.
But lest you think you have Iron Savior completely pegged, the band does throw a twist at you in the end.  As the album comes to a close, bassist Jan Echert is given the chance to step up to the mic on the albums big ballad, "Ease Your Pain".  While his is definitely a different voice than Sielck's, it still works perfectly within the confines of the album's closer, and shows that just when you think you have Iron Savior figured out, the band shows it still has a trick or two up its sleeve.  A big, soaring ballad, "Ease Your Pain" concludes the Skycrest story well, and while not my favorite track on the record, it is delivered so well that I can't help but find myself smiling as I nod along to the rhythm.  A nice acoustic guitar interlude follows the achingly soulful guitar solo, and Echert takes the song through one final chorus run before the record concludes.
Thirteen albums in (12 original studio records and one re-recording, 2017's Riding On Fire) the band shows no signs of slowing up, and Sielck seemingly has no end to the stories he has to tell from the Iron Savior universe!  Destined to find its way into many metal fans' Top 20 of 2020, Skycrest is a definite winner and a worthy addition to the Iron Savior catalog.  Hunt it down and snag your copy now so you can embrace the greatness!
Rating:  Maybe a slight step back from Kill Or Be Killed, this newest effort is still highly crankable!  Torque the knob up to 8!
Back To Reviews Index
Posted by arttieTHE1manparty at 5:14 PM