DUFF McKAGAN "It's So Easy (And Other Lies)"--BOOK REVIEW 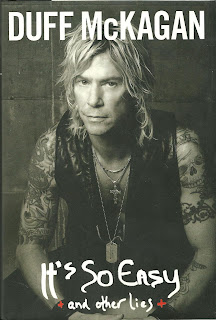 (c) 2011 Touchstone Books
McKagan is the third Guns member to publish his memoirs, along with Slash and Steven Adler, and it is by far the best read of the three.  McKagan and his co-writer Tim Mohr, have put together a comprehensive, very reader-friendly history of the Guns N' Roses bass player's life from before, during, and after the GnR experience.  His life as a drug addict, and as a recovering addict, is well chronicled, as are his exploits with what many consider to have been the most dangerous band in the world during the height of the Gunner's run.  Duff's views on the rise, the peak, and the collapse of the band is entertaining and informative without an overly inordinate amount of finger pointing, although his frustration and anger with Axl's behavior at the time is not hidden.  The Velvet Revolver years are also given the autobiographical treatment, but not nearly to the extent the GnR years are covered, although the on-again/off-again struggles with Scott Weiland are given a good dose of coverage here.  Additionally, McKagan talks about his Seattle punk roots (such fabulously named bands such as The Fartz and the Fastbacks), his new band, Loaded, and even his stint with the re-formed Alice In Chains is also touched upon briefly.  He also discusses his solo record, his unreleased solo record (some bitterness there!), and his one-off project called the Neurotic Outsiders with Steve Jones, Matt Sorum, and Johnathan Taylor.

People not familiar with McKagan's story are likely to find themselves intrigued about Duff's forays into mountain biking, the martial arts, mountain climbing, marathon running, a return to college, and ventures in the business and writing worlds...all of which he found himself successful at to one degree or another.  Marriage, however, was something McKagan required multiple tries at before finding success and, as is made obvious in the book, he has finally found his soul-mate and his missing half and has become a happy, successful family man.

All three of the Gunner's books so far share similar stories and really don't diverge too much on the rise and fall of GnR, which is nice because it adds a lot of credibility to everyone's story that they remember things pretty much the same way.  (Obviously Adler doesn't have the information about the Illusions years that Slash and Duff have...).   It is obvious that McKagan is far more able to reconcile his feelings about Axl and the way things went down, and McKagan still considers the moody lead singer a friend to this day.

There are a few pages of color photos from various points in McKagan's life, which I think are always a good inclusion.  These range from band photos to family photos and really help to shine a light on the man in the various worlds he has been a part of in his life.

I devoured the 350+ page book in less than 3 days and consider it an excellent read that any fan of Guns N Roses, or likely even Velvet Revolver, will want to have in their collection.