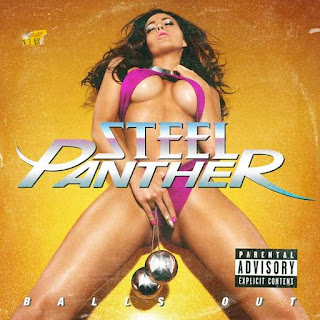 Well, ready or not, Steel Panther is back with more KILLER hair metal songs and HORRIBLE lyrics.  You loved Feel The Steel?  You're likely to love this one also.  Embarrassed to admit you listened to Feel The Steel all the way through before turning it off?  You're not even going to want to open the wrapper on this one!

I'm not going to waste the time going through each and every one of these songs, as you either love the porno-set-to-hair metal lyrics and humor of this band or you don't, so there is no sense in breaking each of these juvenile tracks down on an individual basis.  The titles are pretty much self-explanatory, anyway.  As such, I can review this entire album in just a couple of paragraphs.  This is easily one of the best hair metal albums to come out in decades...no, seriously...as far as the music goes.  Musically, there is not a single weak song here (minus the non-song intro), with huge solos (including one from Mr. Nuno Bettancourt), thunderous drums, throbbing bass (oops...now I sound like the band's lyrics!), and excellent backing vocals.  The production is top-notch, the mix is perfect...everything about this album is phenomonal...except the lyrics.

I am NOT a prude by any stretch of the imagination.  I loved W.A.S.P. back in the day and I've sung along to the worst that Motley Crue, Skid Row, Bon Jovi, or anyone else ever put out on vinyl, tape, or CD.  But NOTHING, not even W.A.S.P.'s "Animal" comes close to the utter trash and filth these guys have recorded here.  And yes, I get it, it's a joke.  It's just that it's the same joke done fourteen times to different tunes and slightly different tempos and rhythms with different (albeit GREAT) guitar solos wrapped around it.  It gets old...fast.  If Steel Panther wanted to keep three or four of these songs and also mix in six or seven REAL songs, I could even manage to consider the album something other than a XXX comedy album.  Sadly they don't, and I can't.

Folks, I want to LOVE this record.  As good as Feel The Steel was musically, this one is even better.  But as bad as the last one was lyrically, this one may actually be even worse.  So...as I stated in the opening paragraph, if you liked the first album, you will most likely love this one.  However, if you want to be able to listen to an album at full volume without worrying about the police being called and you being charged with public indecency, this album is one best left unopened...or unpurchased!

Rating:  Once again, musically, I would LOVE to crank this album to 9 but lyrically, I have to recommend just turning it off.

Back To Reviews Index
Posted by arttieTHE1manparty at 3:56 PM