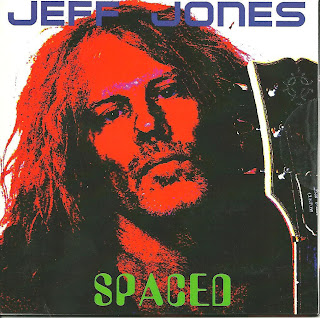 To the uninitiated, Jeff Jones was the driving force behind the late 1970's through mind-1980's hard rock group St. Elmo's Fire, and also part of the excellent underground sleaze act, Vamp LeSatat.  While neither one was exactly what would be referred to as a household name, both were top-notch bands as far as talent goes, and Jones' guitar playing was definitely head-and-shoulders above that of most players in the Hollywood scene, especially as far as playing the more melodic, often blues-influenced style that so many glam and hair bands abandoned in the early-to-mid 80's.

Stylistically, Jones' the songs here run the range from Page or Blackmore-styled riffing to AC/DC or even early Priest-styled metal.  While this may seem a bit of an odd combination of styles and sounds, it is not entirely unexpected from a compilation album or older material, and it actually serves to keep the listener's interest piqued for what may come up next.

My copy is an odd combination of a slip-sleeve/digipack thing, so there are no credits here and I have no idea who is playing on the rest of these songs if it is not Jeff all on his own.  This is a bit of a shame, to be honest, because the rhythm section on many of these songs deserves mention as they are a tight unit, especially on songs like "No Satisfaction Blues", where the driving rhythm is a huge part of the song for me.  If Jones is truly doing everything, as I am guessing he is, then it adds all the more to the talent level the guy obviously possesses and makes this stuff all the more impressive.  The vocals are generally performed in a gritty style, typically in a mid-to-lower register with a bluesy, sometimes sleazy feel to them, such as on "Queen Of Hollywood" or my personal favorites, the short, buzzing rocker "Bad Motor Girl" and the classic-Def Leppard sounding (musically, anyway) "Miss Tragedy".  "Hell To Pay" has a definite Bon Scott-era AC/DC feel from the guitar tones to the production style, while "Resurrection" again reminds me of High And Dry-era Leppard.


Nothing here is likely to blow you away as overly original, as most of this older material is very reminiscent of the sounds of the time.  However, fans of the late 1970's and early 1980's more melodic classic rock sound are likely to find a LOT to like on this disc.  As with all of the material Jones' XXX Records has been reissuing and releasing, the production is very solid and cleans up very well, making even these older songs an enjoyable listen.  I do wish the backing vocals were a bit higher in the mix on some songs, but I think this issue may be a result of some limitations in transferring this older material to CD from the original source tapes. This is a minor issue, however, and does not ruin any of the songs by any means.  I'm anxious for the next batch of songs from the Jones' vault to be released for me to get to take a trip back down musical memory lane with...

Posted by arttieTHE1manparty at 10:15 AM