HEARTLESS "Five Bullets In Your Heart" 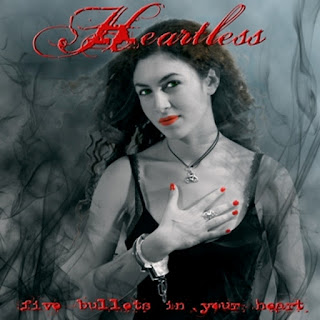 Hailing from Italy, the four guys in Heartless claim a rather odd mixture of musical influences, especially when the sound they come up with is considered.  While they claim such artists as Bryan Adams, Motley Crue, Kiss, Chuck Berry, Poison and The Beatles as some of their influences, virtually NONE of these can be heard in the music they have created on their debut EP, Five Bullets In Your Heart.  What the listener is given is a pop-punk/sleaze amalgamation that while energetic and up-beat, does not do a whole lot as far as forging new ground musically.  It's not a bad effort, just not overly memorable, in my opinion.

The EP starts off with the frantically rocking "Baby Maybe Someday", which is the band's first single which, according to their MySpace page, was first released in January of 2010.  The mix on this song, and on the entire album, is very bass heavy and rather muddy.  I don't know if this is intentional or not, but it is somewhat distracting to have the bass buzzing so loudly that I actually turned off the sub-woofer on my computer's sound system so I could more clearly hear the guitar solos.  This was a good move on my part as the guitar player, Simo, is one of the true highlights of this band.  His solo on "Baby Maybe Someday" is the best part about the song but it is absolutely buried with the full bass included.

The follow-up track, "Heartless", is another pop-punk anthem that really sounds like it would have been at home in the punk clubs of the early 80's, complete with mohawked-and-safety-pin-pierced punks slam dancing in a pit in front of the stage.  This is a truly bizarre song, as musical pace of this song has to be described as breakneck early on before taking an odd down-tempo turn at about 2:40 into the song that, quite frankly reminds me of a 1970's kind of jam-band going off on some weird musical tangent.  Once again, Simo's guitar solo on this piece is strong and his instrument carries a really nice tone, but yet again it is buried by the bass which is the driving force on this track.  The track kicks back into gear at about 4:30 with the previously mentioned solo by Simo, but by this point, honestly, I have lost interest in the song and had to go back for a couple of extra listens to get a feel for the song.  I'm really beginning to get the feeling that Alpha is not only the bass player but perhaps the founding member of this band, which would explain why his instrument is so out front in all of these songs (and why his name is listed first in the credits, which is a bit odd....).


Back-to-back "summer" songs follow, with "Stolen By Summer" and "The End Of Summer", which made me think this might be some kind of concept thing (it's not, at least as far as I can tell).  "Stolen..." starts off with an acoustic guitar intro and a quieter vocal moment which shows Rob actually singing rather than using the punkish "Geddy Lee meets Sid Vicious" nasal vocals and screams he employs throughout the rest of the album.  The track is a rather airy-70's feeling track with an odd guitar solo that has an almost flamenco feel to it and sounds eerily similar to the Eagles' "Hotel California" at times.  In fact, that song is a good idea of what I think Heartless was aiming for with "Stolen By Summer", and they may have been able to pull it off (or at least come a bit closer) had the bass not destroyed the emotion of the track.  "The End Of Summer", it turns out, is a nearly five minute long instrumental that starts off with a guitar intro that appears to be an exercise in showing Simo's talent and actually reminds me of something Tesla might use.  At the 1:10 mark, however, the band kicks into a punkish-pace once again but keeps a 70's influenced guitar tone throughout.  Simo gets the chance to really shine on this track, and it is actually the high point of this effort for me, which is really saying something as I usually consider instrumental tracks on an otherwise vocal album to be filler.  Not the case here.


The closer is another up-tempo rocker, this time giving the drummer, Ste, a chance to put his talent on display for a considerably long solo stretch.  Once again, the guy has talent, there is no doubt, but this constant changing of tempos and employment of multiple solos and musical styles inserted into otherwise punkish songs is distracting at best and generally is just annoying.


I wish I could find something to say about the band as a unit that is more positive, but it is difficult to do with the way this project is put together.  Like I mentioned, this has the feeling of a jam band kind of setting, like the band went into the studio with no real idea of how the songs were going to turn out until they heard the final recorded output.  The bass is just overpowering throughout this EP and the lack of any kind of structure to the songs really damages what I think could be some interesting, if not amazing songs.  I hope the fact that this band is getting some exposure with Atomic Stuff Promotions will give them the opportunity to better record their next effort, with an actual producer giving some direction to the music these guys make.


Rating:  Turn this down to a 4.5, with the instrumental track really being the defining cut here.

Posted by arttieTHE1manparty at 3:54 PM