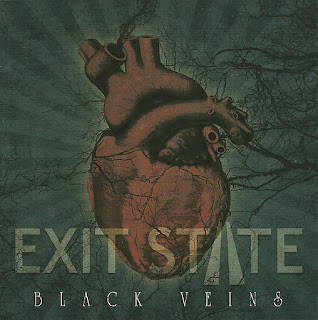 (c) 2011 King Prawn Records/Rock Sector Records
Roy Bright--Lead Vocals, Rhythm Guitar
Phil Ireland--Bass, Backing Vocals
"Texas" Peat Hicks--Drums
Adam Stephenson--Lead Guitars
Exit State is a band that I knew virtually nothing about upon receiving this disc in the mail.  After doing a bit of research, it appears this is the band's second release and that they achieved at least moderate popularity with their debut album, Death Of A Rockstar.  While this is not normally the type of band that I would seek out on my own, Exit State is not a bad band by any means, nor is this a terrible album.  It has some very strong moments, to be honest, but it suffers from a couple of things, which I will touch on shortly.
First the good.  Exit State plays a catchy brand of alternative-influenced hard rock with some punkish overtones.  Sounds like an odd mix, I know, but it works for the most part, especially on the up-tempo numbers where the band's energy really comes through.  The guitar tandem on this album of Bright and Stephenson is particularly adept at playing this style of music and seem to feed off of each other.  Unfortunately, according to the band's bio page on the Rock Sector website, Stephenson has left the band for personal reasons and a permanent replacement has not yet been found.  Hopefully a new member won't disrupt the creative balance of this band because when they are on, they are definitely a solid band.  Ireland's bass is also strong, especially evidenced on songs like "Stay" where his lines are right out in front, driving the tempo of the track, which I think is one of the strongest on the disc.  "Out In The Rain" is another song where the bass can really be felt.
"Raw" is a good term to describe the sound of much of this album, but not in a negative way at all.  There is no feeling of overproduction here, yet all of the instruments are easily heard in the mix most of the time.  There are a couple of songs that come across as a bit muddy, such as the album closer, "This Life", but this is the exception rather than the rule.  Most of the songs are not overly complex, but I think that also adds to the emotion and grit of the disc in general, and it makes for some catchy moments.

As far as stand out cuts go, the ballad, "All For You" is easily the best track here and is one of those emotional moments where, despite the fact that Bright's vocals are not overly polished, the power of the lyrics and his delivery comes through very well.  The solo on this song, which is one of the real highlights of the album, is provided by guest axe-slinger Gizz Butt from Prodigy.  Not being a fan of Prodigy in even the smallest way, I was surprised to hear something like this solo coming from his guitar, and I would have loved to have heard more songs like this.  Other good songs include the title track, "Enough Already", and the really catchy "Check Out The Crazy".
At 12 songs, I feel the album is about three tracks too long.  There is definitely a small handful of lesser songs here (dare I say "filler"), and I think that if the album was pared back to 9, or maybe 10, songs it would stay fresher.  As it is, there are a couple of tunes, that kind of get lost in the wash and sound too samey with the rest of the album.  In fact, it took me four or five spins through before I could even really recall hearing a couple of the songs, which is not really a good sign.  Still, this is a worthwhile effort and the high points, such as "All For You" do a good job of making up for some of the lesser moments.
Rating:  Rock this at 6
Back To Reviews Index
Posted by arttieTHE1manparty at 4:47 PM