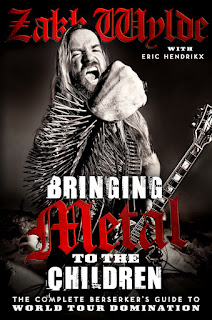 (c) 2012 Morrow Books
I'm sure that when Zakk Wylde set out on his Viking-esque quest to conquer the metal world as a teenager, he had no designs on eventually becoming the author of one of the most brutally honest, and, at times, brutally vulgar, books about how to make your metal dreams come true.  Yet that is exactly what this modern day Norse Warrior delivers to his fans who he belovedly refers to as his Berserkers.  The book is equal parts informative, entertaining, and cringe-inducing language, as Wylde pulls no punches in discussing (often in the most colorful language possible) his alcohol-fueled rise from Ozzy Osbourne's  (whom Wylde refers to as The Boss) sideman to being the frontman for his own band, Black Label Society.
For anyone who has read Forrest Griffin's book (you know, the UFC fighter...who is mentioned in the book), this book is going to have a very similar feel...the two co-authors interjecting their thoughts and opinions at seemingly random times.  In fact, sometimes I forget who is telling certain parts of the story and I have to go back and re-read a section here and there.  Sometimes various parts of the book don't seem to fit with the chapter they appear in until you have read all the way through, which can be a bit confusing, which is another characteristic this tome shares with Griffin's.


At times, it almost feels like I am reading a script from Spinal Tap because so many of the things that Zakk (and his co-author, Eric Hendrikx) describe are so bizarre, so humorous, they almost don't seem possible (his first recording session, for example!) .  There are some pretty humours odds-and-ends here, such as Wylde's list of hair band songs he wishes he could hear Chris Cornell sing (Poison is on the list...twice...).  Additionally, the reader is treated to some information about the BLS band that many are totally unaware of, such as the meanings of the various patches worn on the band members' clothing.  There is a good deal of elbow-rubbing with famous individuals, including a late night, drunken phone call with Eddie Van Halen (which produced the Cornell list), Rob Zombie, the Alice In Chains guys, Snake from Skid Row, Lars from Metallica, numerous professional wrestlers (Stone Cold Steve Austin and Chris Jericho being the biggest names), the previously mentioned Forrest Griffin, and, of course, the Ozzman.
While I have never been a musician of any note...or notoriety...it seems to me that a lot of the advice Wylde delivers here to those who may be pursuing the metal god lifestyle is pretty solid, if delivered with a heavy dose of profanity.  With advise ranging from "Play What You Love and Moves You" to what to do when a metal groupie, or in this case, Japanese groupies, give you crabs (covered in the aptly titled section, "World Tour Survival Technique:  STDs, and I'm Not Talking About Stronger Than Death"), I think Wylde is legitimately attempting to provide up-and-coming rockstars with some honest, if humourous, insight into the roads he has travelled in his career.

One other thing of note is it should be OBVIOUS his wife must have a very special place in her heart for her Viking man, because some of the things he says about her, and the way he talks about her (and their sex life, in particular)...let's just say my wife would KILL ME!!  Again, not for the faint of heart, there is some pretty graphic language, ableit not pornographic language, that is used in these sections.
There are some pretty cool photographs, both black and white and full color, along with various setlists, photocopies of hand-written lyrics, and magazine covers scattered throughout the book, which adds a nice touch.  The appendix of the book has a bunch of hilarious items thrown in, including several pages of Tweets between himself and "JDesus", Wylde's bass player, John DeServio.

I think it's safe to say that rabid BLS fans, and a lot of Ozzy fans, are going to find a lot to like about this book, but I think casual fans may find quite a bit about the man to like, also.  Many people may be shocked to learn that the man professes to have a deep faith in God and Jesus Christ, that he enjoys working out (and has been accused of being on steroids), and has actually quit drinking.  While Wylde may be just a bit too over-the-top for some...and FAR too vulgar for others...I think this is a book that deserves to be read.  Overall, I found this to be an entertaining and insightful book, but it wasn't a book that I could say I sat down and just ripped through from cover to cover; it took me some time to absorb it and take it all in.

Rating:  A solid read with plenty of metal anecdotes.  Make sure to brush up on your Viking and Norse mythology before tackling this book.

Back To Reviews Index
Posted by arttieTHE1manparty at 3:10 PM