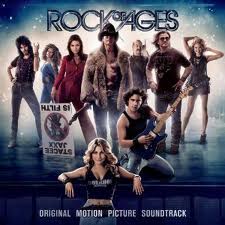 Okay...  There are three ways to look at this soundtrack...and the movie...and even the broadway musical, for that matter.  You are going to have purists who are going to HATE this, and there are people who are on the fringe who FREAKING LOVE IT because it sounds like Glee on steroids (and with bigger hair), and then there are going to be people like my wife who can't stop smiling when she hears these songs because they are familiar, comfortable, and given new life with new singers and new interpretations, sometimes created by "mashing up" multiple tracks into one song. ﻿ Where do I stand?  We'll get to that in a moment...

For those who are unfamiliar, Rock Of Ages is the story of an aging rock star (Cruise), a midwestern girl chasing her dreams on the Sunset Strip (Hough), a barback (Boneta) who works at a rock club owned by two shady businessmen (Baldwin and Brand), and the ultra-conservative wife of the city's mayor (Zeta-Jones), who is trying to shut down the club.  I'm not going to get into any plot details or anything like that, because they have little to do with the review of the music here.  However, it is key to understand that the setting for the musical/movie is 1987, and every single song here is from that era, and there are movie cameos from Sebastian Bach (Skid Row), Kevin Cronin (REO Speedwagon), Nuno Bettancourt (Extreme)...and Debbie Gibson.

I know a lot of people are going to cringe as soon as they see that the actors are singing these songs and that this is NOT the typical movie soundtrack with the original bands performing their own songs.  Keep in mind, however, that this is a MUSICAL; the actors are going to be singing.  That's how it works.  Now, does that mean it works on all levels all the time?  Nope, not even close.  There are a few cringe-worthy moments here, but there are also some rather pleasant surprises, as well.  So, let's break this project down in that fashion:  pleasant surprises and cringe-worthy moments.

So, after getting through all of that, where do I stand?  With which group do I side?  I tend to side with my wife and fall mostly in the "smilers" category, because it is fun to hear different takes on many of these songs.  There are moments, however, when I fall into the "haters" category, mostly when Hough steps up to the microphone and my ears fill up with saccharine and Jell-o due to the insane sweetness she liberally applies to each of her vocal takes.  (I still shudder when I hear her kicking off "Sister Christian", and I have to...I mean HAVE TO...skip it...).  The soundtrack is not going to be a frequent player for me, but I'm not going to throw it out or trade it off, either.  Take it for what it is and you will likely be fine; go in looking for killer new renditions of your all-time favorite songs and you will be sorely disappointed.  And, to the Glee fans...I can't help but think you're going to love this completely...

For you purists, keep an eye out, because I have a feeling there will be a second sountrack released (I could be wrong and have NO inside information regarding this, but it seems likely), as there are several songs performed by the original artists in the movie as well.  I know that Quiet Riot and Skid Row are both featured in the film, for example, among others.  That disc might be more to some folks liking...
I can't wait to see the movie, by the way...and I am not a fan of musicals, in general.

Rating:  I say rock this at a 6, but it could be borderline crankable without most of (not all of) Hough's work, here.

Back To Reviews Index
Posted by arttieTHE1manparty at 4:24 PM