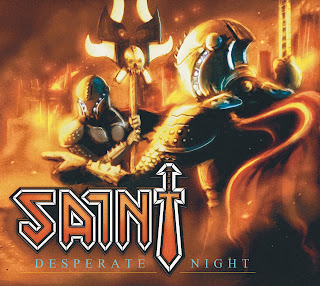 Christian metal legends, Saint, have returned with yet another set of metallic, hard rocking material featuring the piercing wail of Josh Kramer on vocals, Jerry Johnson shredding away on guitar, and Richard Lynch and Jared Knowland thundering away on the bottom end of things (Lynch also sings lead vocals on one track here).  For a few years now, Saint has struggled with maintaining a consistent line-up, first with the departure of long-time guitar slinger, Dee Harrington, and then with Kramer relocating to a different part of the country.  Fortunately, technology has allowed Kramer to remain the "voice" of the band, and new axe master, Jerry Johnson, who joined the band with 2004's In The Battle, has brought a fresh sound and style to the band without sacrificing the classic sound Saint is associated with.  The drum stool has been a revolving, almost Spinal Tap-ish situation, with a different drummer on each of the last three albums, but this has not kept the band from releasing solid album upon solid album, peaking with 2009's Hell Blade.

For fans who pre-ordered Desperate Night, a pre-release download of the album was made available, which this review is based upon.  I have been told there is an intro and an outro to the album that is not included in this download, so I will possibly amend this review once the disc arrives in my mailbox.  Regardless, I don't see what an intro or outro could add to, or take away from, this album, as Desperate Night comes out swinging from the start, doing its best to equal the greatness that is Hell Blade.

The first track here is one that really reminds me of classic 80's-era Saint material, as the crunchy, metallic edge of "Crucified" reminds me of material from albums like Time's End or Too Late For Living.  Kramer's vocals, which often get compared to those of Rob Halford, are in fine form here and show no signs of weakening with the passage of all those years of screaming, and Johnson launches into the first of many blistering solos on this album at about the two minute mark on "Crucified" then slides easily back into the chugging, almost breakdown styled rhythm of the rest of the song.  "The Key" quickly follows up with Richard Lynch taking a turn at the lead mic stand (Kramer slips into backing vocals mode on this track). Lynch has nowhere near the range of Kramer, but his gritty delivery style is not dissimilar from the approach Josh employs at times.  Again, this is a solid, crunchy track with another excellent, classic sounding guitar solo that I wish was at least a tad bit longer as I felt a bit cheated out of spending some time with Jerry and his guitar.

More classic Saint sounds follow, with "End Of The World" harkening back to the the Too Late For Living sound once again and tackling a favorite subject of the band as end-times prophecy is the topic of this excellent number.  To me, a song like this one is EXACTLY what I think of when I think of Saint, and it is a real treat to get to hear these guys take something that sounds so familiar and still manage to keep it fresh and current sounding at the same time.  By the way, Johnson gets a nice, long solo to assault your ears with on this track, so shred-heads pay close attention!

Without breaking down every single song, let me just say that the rest of the album is consistently and unmistakably Saint, with one exception.  "Let It Rock" sounds like a collision between Saint and Accept as far as style and pacing goes, and "Judgement" and "Desperate Night" both bring the goods as far as approach and substance, although "Desperate Night" features Brian on vocals, rather than Josh or Richard, which I found a bit odd; I realize he is the "future vocalist" of Saint, as Josh has moved and can't easily participate in recording, but why throw him into the mix here?   It should be noted that Brian does a credible job, by the way, and this is not an indictment of his talent.   As to other tracks, "The Fray" and "Inside Out" are both pure classic-sounding Saint songs that feel like they could have come from the Hell Blade recording sessions, especially with "Inside Out" using more Obama speech excerpts to help drive home Saint's political stance and views of the country's current state in much the same way "New World Order" did on the Hell Blade release.

One song I have heard a lot of people rave about is "Zombie" (some call it "Zombie Shuffle" for obvious reasons once you have heard the chorus), but I can't say that I find this song to be all that appealing, at least upon the first ten or twelve listens.  I don't skip it, but I think it disrupts the flow of the rest of the album with its chunky delivery, sparse sound, and odd time structure, although the ghoulish background laughter is entertaining.  To my ears, this is just not a Saint song, for lack of a better description.  Fortunately, this is the shortest song on the album and the next track, "Judgement" gets things going back in the right direction in short order with another chugging number that Saint fans will likely cling to as one of their instant favorites.

The album's closer, "Escape From The Fire" is possibly the pick of the litter here, as it is a full-on metallic assault that reminds me of Painkiller era Judas Priest musically.  Josh spits and snarls his way through the lyrics and tossing in some of his signature, piercing screams for good measure, all over a ferocious rhythm guitar, pounding bass, and some very solid drum work from the new kid on the block.  This is a great way to bring an impressively solid album to a close.

Stand out cuts are definitely "Escape From The Fire", "End Of The World", "Let It Rock" and "Inside Out".  Weaker moments, at least for me, are the previously mentioned "Zombie" and the re-recorded (and little known) "To Live Forever", which appeared on the 1999, Josh-less Perfect Life album.

While not quite on the same level as the fantastic Hell Blade, no fan of Saint or this style of metallic hard rock will walk away from Desperate Night disappointed, as this is still one of the best records I have heard so far in 2012 and head-and-shoulders above what so many younger, supposedly-hungrier bands are putting out.  Saint is still at the top of their game and they still bring it nearly 30 years after their first release!  Here's hoping we don't have another three year wait before the next Saint record!  Also, I truly hope that the band figures out how to continue to utilize Josh at least part time on all future records, because while Brian is good, Josh IS the voice of Saint, at least to me!  Long live Saint!

Rating:  Definitely a crankfest worthy of a thunderous 9!

Back To Reviews Index
Posted by arttieTHE1manparty at 10:20 AM