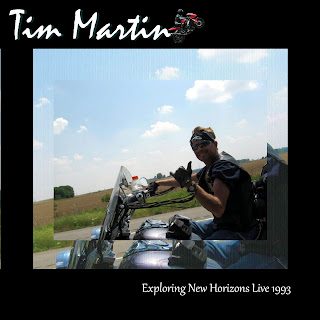 The odds are strong that you have never heard of Tim Martin unless you are one of those people that reads the liner notes of every album you ever get...and even then, you probably don't recognize his name as being a co-writer of a handful of Liberty N Justice songs.  He also performed on the first "all star" project for LnJ, singing the song "Foolish Child" on the Welcome To The Revolution release, so the connection between Tim and Liberty N Justice is strong and maybe a handful of people will dig out their LnJ albums to look for his name.  Even if you don't, I encourage you to check out this release, which will be made available digitally on June 12.  Featuring Tim and his acoustic guitar, this project was recorded live in 1993 and is being given new life on LnJ Records as a tribute to the man who Justin Murr of Liberty N Justice considers a "good friend and spiritual mentor".  Sadly, Tim was killed in a motorcycle accident in 2011, prompting Murr to give people the chance to hear the music of this man who was silenced too soon.

I don't want to use the word "warning", but I can't think of any other thing to call the following statement:  some people are going to be immediately turned off by this album due to the very up-front, unashamed manner in which Martin talks about God and Jesus.  This album is a pure praise and worship album featuring eleven songs of just Martin and his guitar recorded in a live setting.  It never "rocks", it's never "heavy", and it is filled with songs that Martin admits during his opening monologue "none of you are going to know because I wrote them".  That shouldn't take away from the fact that Tim Martin had a couple of obvious gifts.  First, the man has a very strong voice with a solid tenor range.  Second, the man could craft songs, and it is apparent why Justin Murr of Liberty N Justice wrote with Martin on several occasions (Murr co-wrote some of the songs on this album, also).  Martin is also a good acoustic guitar player--not flashy, but solid with no glaring mistakes or string squawks--and, as such, this is a very well performed album filled with songs about Martin's faith and love of Christ.

It would have been interesting to hear several of these songs in a full band setting, or perhaps handled by Murr and Company, as I think there is some definite "rock possibility" with some tracks, especially "Devil Is A Liar".  I also think "Desperado" could me a killer power ballad-type of song with a big, soaring guitar solo in the middle.  "Tear Stained Eyes" is a powerful song as it stands, but I think with just a little electricity added to it, a whole new audience would be rattled by the message about a homeless child.

You are going to have to be in the right frame of mind, or right mood, to listen to Exploring New Horizons, as the full acoustic setting is not for everyone.  Even I could not just pick this disc up, pop it in, and listen from start to finish without being in the right mental state, and that's okay.  I can say the same thing about hundreds of albums in my collection.  Some people also will not like the dialogue that introduces every track here, as Martin tells about where the song came from or tells a story that introduces the track to follow.  That doesn't take away from the fact that Martin was a man of talent, conviction, and faith and someone who obviously loved the music he made almost as much as the Subject he chose to write about.

Rating:  Crank this...as much as you can crank an acoustic album...to a solid 7.

Back To Reviews Index
Posted by arttieTHE1manparty at 8:54 AM