DEE SNIDER "Shut Up And Give Me The Mic" (Book Review) 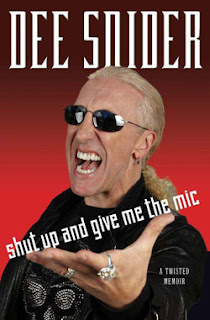 The rise, the fall...the hits (and misses)...the PMRC hearings...the implosion of the band...and the resurrection of both the man and his band...all are covered with stark honesty and a solid dose of humor in this autobiography from Dee Snider.  Never one to back down or shy away from controversy, Snider comes out swinging in his "Twisted Memoir", taking swipes at Nikki Sixx ("If the only thing that floats your boat are journals from drug-addled, ex-junkie, sex-addicted rockers, forget it.  Those books are bullsh*t anyway.  Have you ever known a junkie?  They can't remember what they did thirty minutes ago, let alone thirty years ago."), Krokus (referred to less-than-affectionately as "Krapus" throughout the book), Jon Bon Jovi, and others...including his own band members and HIMSELF...Snider lets loose on a variety of topics.  However, through it all, he never gives the reader the sense that he is out for any kind of revenge for the band's failures (he accepts the blame almost completely as his own), that he is bitter (in fact, he comes across as exceptionally grateful and humbled by his experiences), or that he was cheated in some way.

A self-admitted "megalomaniac", "egomaniac", and even "asshole", Snider takes the reader from his very humble beginnings to the very top of the heavy metal world, giving glimpses inside what it was like to make the albums, the videos, and the huge stage productions.  He also, through introspection and backward glances, helps to show how, if he had been paying attention and not totally engrossed in his own rock star world, he should have seen his band start to fall apart.  Add in various "Dee Snider Life Lessons" ("Never walk into a completely new environment as if you own the place..."), a generous collection of color photographs, a transcript of the speech he delivered at the Congressional PMRC hearings, and discussion of his post-Twisted bands Desperado and Widowmaker, and you have an intriguing read that will keep you engrossed and turning pages long after you first pick the book up.

Dee Snider can now add the title of "successful author" to his long list of titles that can be heaped upon him, from songwriter to rockstar, actor to screenplay writer, television host to radio host.  But you know what?  After reading the book it becomes obvious that the titles he is most proud of are husband and father, as he goes to great lengths to explain how his wife, Suzette, was his anchor and savior on more than one occasion, and how his kids have always been an inspiration to him, whether in the beginning ("The Price" is written largely about time away from Suzette and his son, Jesse) or throughout his crawling his way back from rock bottom.

The best way to sum this book up would be to use a quote from the book's foreward:  "This is the story of childish dreams, great struggle, Job-like perserverance, ascension to dazzling heights, megalomaniacal obsession, and a mind-numbing, brutal fall from grace. It's also about an undying love and dedication between a man and a woman that -- though sorely tried -- withstood it all."  You're going to laugh, you're going to cringe, you're going to possibly even become a bit emotional at times, but in the end, you are likely to find yourself pumping your fist and cheering (at least internally) for "the Twisted Sister", Dee Snider.

Easily one of the best hard rock/heavy metal memoirs I have ever read...and I've read a lot.  Buy it, download it, check it out from the library...whatever. Just read it.

Back To Sleazy Readers Index
Back To Home Page

Posted by arttieTHE1manparty at 4:36 PM