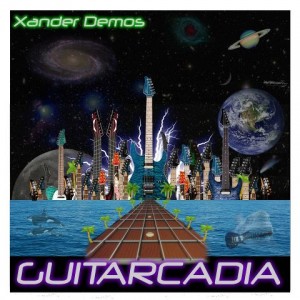 I honestly had no idea that shred albums were still being released today.  Seriously.  Oh, sure, Malmsteen, Vai, and Satriani all release albums from time to time, but I don't know that any of their discs would be considered "shred" records, at least in the sense of the 80's material released on labels like Shrapnel, Roadrunner, and their kin.  I thought shred was...well, dead.  Boy was I wrong...

Xander Demos (pronounced "de-mus") self-released mostly instrumental masterpiece in 2011, but it wasn't until I found out he would be appearing on Liberty N Justice's upcoming Cigar Chronicles release that I had any idea he even existed.  How a man of this musical talent has remained hidden from someone who has such an extensive collection of hard rock and metal (and a lot of label and promoter connections, to boot) is a mystery to me.  This man has talent just bleeding out of his hands, whether ripping through a modern-day shredfest like "Right Angles", the updated, metallic take on Don Henley's "Boys Of Summer", or even the more laid-back remake of Chris DeBurgh's "Lady In Red".  The diversity of the songs, coupled with the progressive song structure, incredible speed and precision of Demos' playing, and the overall musicality of this project floored me, as I had not heard a record of this style that felt this...complete...since Malmsteen's Rising Force or the Speed Metal Symphony album from Cacophony (Marty Friedman and Jason Becker's project).

While "Nothing Major" was a bit too keyboard heavy for my liking, the rest of the album was just one pulse-quickening scorcher after another until we get to the album's closer.  "White Knuckle Driving" sounds like it should be on every driving video game out there, and the title track, "Guitarcadia" has a big, progressive feel to it, with all sorts of space-noise sounding guitar pieces intermixed throughout the musical landscape that paces the rest of the song.  However, it might be the monstrous "Under A Darkened Sky" that really steals the show as far as Demos' original material goes (the overall show-stopper is probably the surprise "Boys Of Summer"), as this epic, 8 minute long musical journey features some very dark, moody playing at the outset, with some excellent drumming helping to get things started, followed by some 80's-inspired rhythm playing that will remind a lot of people of old Malmsteen, a la Rising Force or Marching Out.

Speaking of 80's inspired, the inclusion of "Boys Of Summer" and "Lady In Red" both had me feeling like I was back at homecoming or prom again!  While "Boys..." is given a truly shredded update, "Lady In Red", complete with a totally 80's keyboard and drum track, feels a lot like the original, albeit with a guitar doing the "singing" instead of Mr. DeBurgh.  It's an odd, quirky track choice, but it doesn't damage the project.  Younger guitar fans who have never heard the original are going to miss out on the nostalgic feeling "Lady..." is going to drum up in us older fans, but that's okay, as it is certainly fun to hear an artist tackle something a bit off the beaten path rather than re-hash the same beat-to-death cover songs everyone else plays.  Kudos on your boldness, Xander!

Now, I am not a guitar player, and terms like appregio, chord progressions, hammer-ons, pick-ups, etc., hold very little meaning to me.  I just know what I like and I can spot talent when I see (or hear) it, and Demos has plenty of that.  He demonstrates a wide skill set with a variety of sounds and styles and some very precise, error-free playing in today's world of sloppy, down-tuned chugga-chugga riffing that passes for guitar playing in so many bands and on so many records.

It should also be noted that his "band" complements him well here, as all the players deliver spot-on performances, especially his rhythm section and the singers he chose for the couple of vocal tracks here.  So many times you can tell that a drum machine and programmed "players" are being used on albums such as these, but the live feel of the music here never left me feeling like I was listening to a processed record of nothing more than strung-together Pro-tools edits.  Everything flows musically and each player here feeds off of the others very nicely resulting in a full, complete feeling to the recording.

While you can hear such influences as Malmsteen, Vinnie Moore, Vai, Satriani, Freidman and Becker, Demos never comes off as a clone, preferring to carve his own path rather than go back over territory already covered by others.  Sure, there are going to be comparisons...I've made some myself...but these are as more for reference as to style than they are to how the project sounds as a whole.  Fans of neo-classical metal, shred metal, or heavy guitar progressive metal, should find plenty to like about Xander Demos Guitarcadia album.  I am anxiously awaiting the arrival of Liberty N Justice's Cigar Chronicles to hear what Demos lends to that project, as well!

In the end, this is a complicated, yet enjoyable project, that can be a lot to take in all in one sitting, as there is so much going on.  It should be noted that CJ Snare of Firehouse mixed the project and did an amazing job of keeping the music crisp and clear sounding, which greatly benefits a project of this magnitude, but can still be almost overwhelming, at least for someone like me who is used to a little more ebb and flow in style and tempo.  However, Guitarcadia is pulled off very professionally, performed extraordinarily well, and a thoroughly enjoyable listen if you have about an hour to spare to run it from start to finish.  If not, I highly suggest programming your CD player, iPod, mp3 player or computer to play "Right Angles", "Under A Darkened Sky", "White Knuckle Driving" and "Boys Of Summer" so you can get your shred on in a shortened session!

Rating:  Man, what a crankable treat this is!  Crank it to 8.5 and be prepared for the sonic meltdown that will soon follow!

Back To Reviews Index
Posted by arttieTHE1manparty at 11:47 AM