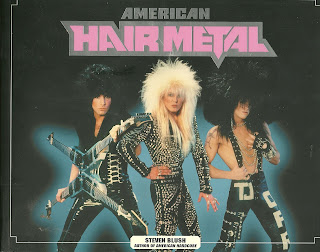 (c) 2006 Feral House
With "American Hair Metal", author Steven Blush has created a glossy look at the Hollywood Sunset Strip scene of the mid-to-late 1980's, when big hair, makeup, and spandex﻿ ruled the scene for both guys and gals.  At a fairly substantial 176 pages, the book has a lot of room to share a wealth of information about the scene, the bands, the groupies, and the music, especially since this is a coffee table format book that is nearly 8 inches tall and almost 10.5 inches wide.  Sadly, at least for me, most of the book is given to sharing photos of the bands, many of which could be found in other magazines or books, and not a lot of time or page space was devoted to actual content.  Oh, sure, there are a lot of cool quotes from various band members, and there is a brief glimpse into the earliest incarnations of the hair metal movement, a la the glam bands of the late 1970s' such as KISS and New York Dolls, the more classic 70's rockers like Van Halen, Aerosmith, and even Led Zeppelin, and AC/DC, and the label feeding frenzy that took place when everyone was trying to sign the next Poison or Warrant, but really, that is about all for substance, and even that is slim pickings, covering only about half the book's pages (and even less than half of the book's content area).
I was really disappointed that more attention wasn't given to the lesser known or unsigned bands of the "American Hair Metal" scene as I think this would have been the perfect format for that.   Where is Tryx, for example?  Or Wildside?  Or Wildboys?  Or Masque?  Notice the book doesn't call itself "Hollywood Hair Metal", so why are none of the east coast bands really talked about all that much?  What about the European bands (a few are given some metion, but not much) of the scene?
Also, I really took issue with the chapter (perhaps glossary is a better term) that the book calls "The Hair Bands", making it appear as if this is going to be some sort of definitive list of some sort.  Trust me when I say it is not.  For all of the Glitter2Gutter readers, I ask you, is it even possible to have a true "list" of the hair metal bands that only starts with Black N Blue and then ends with Winger?  Seems to me we are missing several bands there....  Also, another list called "More Essential Hair Cuts" lists such classic hits as "I Want My Heavy Metal" by Adam Bomb, "American Kix" by Candy, "Drop The Bomb" by London, and "Under The Influence" by Sven Gali, to name but a few.  Now, I don't dispute that these are good songs, but "essential"?  NONE of the bands I just listed made the book's "The Hair Bands" list, but they have essential songs?  Interesting...
At the end of the day, this is nothing more than a picture book with a bit of dialog, a lot of artist ramblings about various topics, and little else of any kind of substance...but perhaps that is as it should be.  After all, no one believes anything of any substance came out of the 80's or the hair metal scene anyway, right?  So why should this book be any different?
Rating:  "American Hair Metal" is a decent "flip-through book" that owners may casually thumb through once or twice, but otherwise it is likely to gather dust on a bookshelf.  There are better, more informative books out there.
Back To Sleazy Readers
Back To Home Page
Posted by arttieTHE1manparty at 3:53 PM