T&N "Slave To The Empire" 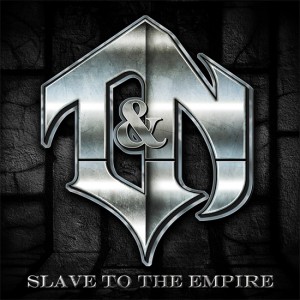 (c) 2012 RatPak Records
George Lynch--Guitars
Jeff Pilson--Bass, Lead and Backing Vocals
"Wild" Mick Brown--Drums on tracks 3, 4, 7, 8, and 10
Brian Tichy--Drums
"Don't think of this as Dokken without Don...that's misleading."  That is a direct quote from long-time Dokken bassist, and current T&N bottom-end banger and vocalist, Jeff Pilson.  That quote says way more than people may think about this project, as I, and many others I would have to guess, were not really sure what we would be getting when we popped Slave To The Empire into the CD player for the first time.  And how could people not be a bit confused...even put off?  I mean, seriously, we have three members of classic-era Dokken performing five classic Dokken tracks alongside seven new compositions.  Add in the fact that the joking-running title of this album was Dump The Chump in reference to Lynch's bad-blood relationship with Don Dokken, and there is bound to be some confusion and possible concern.

Musically, this album is at it's best when it focuses on new, original material.  Case in point is the excellent album opener and title track, "Slave To The Empire".  (By the way, does anyone else find it odd that the opening track here is "Slave To The Empire" and the opener on the new Dokken is "Empire"?!  Hmmmm....  Anyway...moving on.)  I was planning on an album very similar in style to the Lynch/Pilson project from a couple of years ago, but that is not the case, at least at the outset.  The band sounds like it has rewound to about 1988 on this number with the writing style and approach, yet this uptempo rocker remains fresh with modern production techniques.  Lynch is in fine form here, Tichy is excellent on drums, and Pilson sounds eerily similar to lower-range Don Dokken on vocals.  I love this track and love the direction this song seemingly had the album headed.  Other tracks have a bit more of a Lynch/Pilson feel to them, mixing a more down-tuned modern feel with that still classic-era Dokken writing style.  The more mid-tempo number "Sweet Unknown" is such a number, utilizing a somewhat alternative-yet-still-melodic vibe that reminds me of Lynch/Pilson mixed with Dysfunctional era Dokken.  Some effects are used on Pilson's vocals in a few places here, which I don't particularly care for, and George is a bit more subdued in his solo approach here, but all-in-all, it's a decent song with some very strong vocal harmonies.  I suspect it will throw a few listeners for a loop as it doesn't necessarily fit all that well with the re-makes or the more classic-sounding material contained in a couple of the new songs.  "Jesus Train" leaves me kind of flat, to be honest, and is my least favorite track on the album. Decidedly uptempo with a really good drum sound and a bit of a boogie-woogie feel to the rhythm guitars, I just don't get anything from the song emotionally, and this is where I think Pilson's vocals are at their worst. This is the only song I consider skipping, although I rarely do that simply because there is only one song left, and that is "Access Denied".  "Access Denied" wraps up the disc with the most modern sounding of all the tracks here.  It is good that it is at the end of the disc, not because it needs to be skipped or buried, but simply because I think the listener may be more open to hearing something this un-Dokken sounding by the time they have gotten through the rest of the album.  Much like my comments about "Sweet Unknown", Dokken purists are probably not really going to know what to make of this song, but if given a chance it will likely grown on at least half of the people who hear it and accept it for what it is.

On the other hand, "When Eagles Die" captures the band seeming to reach back into more classic-era Dokken as far as it's approach goes, utilizing that sparse-yet-powerful approach that Dokken used on such hits as "Alone Again", for example.  Once again, Pilson proves he is no slouch on lead vocals (and shows why his backing vox are sorely missed in Dokken now), and George lets loose with one of the more signature solos on this album.  "Rhythm Of The Soul" is neck-and-neck with the title track as far as the best new song on this album, as this groove-laden number is extremely catchy and really has a Back For The Attack feel to the guitars but is a bit darker vocally, reminding me of the angrier tone used on Shadowlife or Dysfunctional.  Pilson is especially impressive here, and once again the vocal harmonies are top-notch.  George pulls off yet another impressive solo on this number, and Pilson and Tichy lock in on a nice driving groove that propels this song throughout the five plus minutes of this excellent track.  This is EXACTLY what I would love to hear an album full of!

What I don't want...or need...to hear are the cover versions of classic Dokken songs found on the other five tracks here.  I really don't get the point, first of all.  If you are going to position yourself as a new, totally separate band from Dokken, why go to the trouble of reminding people of who you USED to be?  Then, to top it off, to bring in singers from the classic Dokken era to record the vocals for four of the five re-recordings really just rubs me wrong.  Is this the band saying, "see, we could have done these songs without you" or what?  Well,  Bas does a great job, Ripper sounds very strong, and Mason and Pinnick are passable in their takes on classic tracks, but they are NOT classic-era Dokken (although Bas is close), and once again, I just don't see the point.  Are Lynch, Pilson, and Brown just trying to prove they can still play these songs?  If so, save it for the concert venues, please.  As it is, the best of the re-recorded songs/covers/whatever you want to call them is easily Bach's take on "Alone Again".  This is the best his voice has sounded in quite some time as there is no apparent strain even when he reaches up for the highest notes here, and it does make me wonder what this band would sound like with Bas as the full-time vocalist.  Ripper makes "Kiss Of Death" into a weird Priest-meets-Dio-meets-Dokken song that, much to my surprise, works pretty well...but it does take a few listens to truly appreciate.  Pilson takes the microphone for "Into The Fire", which is probably the most "damn, this IS Dokken!" sounding of all the remakes (although, once again, Bas' take is dang close also...).  It is scary to hear how much Jeff sounds like Don when he wants to/needs to, and I'm betting T&N could do an entire live set of Dokken songs, both catalog and classic, and casual fans would not know the difference...  George changes the solo on this track quite a bit, even adding in a few different little tricks and nuances in an altered last third of the song, but it still works well and actually breathes a bit of fresh air into the lungs of this 25 year old track.

T&N is NOT Dokken. That is the best...and worst....thing I can think of to say about this record. I have no problems with the band recording new material together, and I really like it for the most part.  And, if they want to record Dokken material, I am sure they don't give a hoot about my objections, and a lot of Dokken fans might not care, either.  I personally think the guys would have been better served dusting off lesser-known Dokken songs than some of the biggest songs of their career.  However, to be legit, these guys have to make it on their own, not on a legacy that Jeff and George don't apparently want to be a part of, and which Mick has never left (he's still Dokken's drummer, as of the last album and only plays on the re-recordings on this disc).

In the end, I'm not totally disappointed, but I'm not totally satisified, either.
Rating:  Rock this at 6 for what it is as a package.  If they would have left the "not a Dokken tribute band" greatest hits cuts off, we would likely be cranking this at a 7.5 or so.

How does this compare to the new Dokken?  Check that review here....

Back To Reviews Index﻿
Posted by arttieTHE1manparty at 10:57 PM