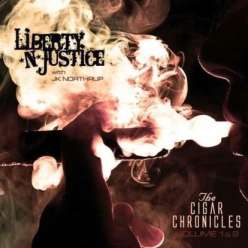 
Where to begin...  As readers of this site know, I am NOT a fan of covers albums.  First, the same dozen songs have been re-recorded and re-made so many times that I don't even like the original any longer!  Second, I get tired of hearing bands just go through the motions, adding zero in the way of creativity or original approach.  All we end up getting is a tired version of a song that sounds pretty darn close to the original but with a different lead singer and maybe a different guitar solo.  And third...well, honestly, covers albums have just been done to death.  So, when Justin Murr told me that Liberty N Justice was going to tackle a covers album as half of the massive Cigar Chronicles effort, I can't tell you I was overly enthused.

Now, I'm not going to tell you I was immediately made a convert from covers-album-skeptic into rabid-must-have fan, but there are a few things about this particular project that puts it head and shoulders above any other covers project I have heard in YEARS!  First, the song selection is completely...and I mean COMPLETELY...unmatched by anything I have ever come across.  Never have I found a hard rock project that so unashamedly tackled everyone from U2 to Whitney Houston to the Bee Gees and Village People to HANSON, for crying out loud!  HANSON?!  But you know what, it all works.  To hear Kip Winger not only absolutely own  a KILLER acoustic version of "Stayin' Alive" vocally, but to also hear it turned into something that was nearly unrecognizable until the chorus kicked in is truly amazing to hear.  Hands down the best track on this collection and one that I have hit repeat on multiple times...

I would also challenge just about anyone to identify what Seann Nichols and Eddie Ojeda warped "Ice Ice Baby" into (hint...there's no Queen rip-off on this version!). For that matter, Stevie Rachelle brings an angry, sleazy edge to "I Can't Dance" that I don't think Genesis probably EVER considered, and he pulls off another of the top tracks on the disc as a result!  CJ Snare of Firehouse rips into a killer modern take on of U2's monster hit "Pride", and Lionel Richie only wishes he had the pipes of James Christian (House of Lords) who simply transforms the slick 80's pop of "Dancing On The Ceiling" into a surprisingly fun melodic hard rock track with a nice groove.  "Iris", which was already a decent crossover rock hit for the Goo Goo Dolls, is reworked and buzzed-up a bit on the guitars and Tony Harnell's vocals bring a power to the track that was not as evident in the original.  Is it better?  Depends on your personal choice, but this version is definitely a harder rocker with less top 40 aspirations and more of a rock attitude.  Likewise, Phil Lewis and Chris Green turn in a nice effort on "You're So Vain", going in a definitely more Faster Pussycat-than-Carly Simon version on this classic tune.  This version is more modern feeling than Pussycat's version, and Green's guitar has a fuzzed-up tone that definitely alters the feel of the track a bit, but not in a bad way, and Lewis' vocals slither all over this number oh-so-snidely, really giving it a grimey, sleazy feel, which is nice.  I'm not a big fan of the programmed drums, but this is pretty easily overlooked on this number.

One of the more surprising moments for me was the cover of Whitney Houston's "Queen Of The Night".  First, I am not a fan of Houston at all, so I'm not sure I could have told you that she did this song originally, although I know I have heard it.  But the "tough chick" vocal approach of Selena McVey really dominate this song which also features some tasty guitar work from Brooke St. James of Tyketto fame.  The programming in this track also works pretty well to give some depth to the track which I think may have come across as pretty sparse sounding without it.  Like I said, I was surprised by how much I like this track and even more surprised when I found out it was a Houston track.

Likewise, the power ballad take on Milli Vanilli's "Blame It On The Rain" is a DEFINITE upgrade, with a very nice vocal performance from former Offspring touring guitar player and Hurricane lead vocalist, Andrew Freeman.  There is a nice piano line in this track and Pete Fry from FarCry does an excellent job of not overshadowing the track with his understated-yet-capable guitar playing.  New permanent Liberty N Justice drummer Eric Rango also contributes his formidible skills to this track which I think is among the top three or four moments on this effort.

There are a couple of songs that don't quite hit the mark for me, but even these are at least given an honest effort and not just dialed in for a paycheck.  As an example, N'Sync's megahit "Bye Bye Bye" has a semi-industrial feel to it that I have a hard time wrapping my head around, although Cinderella's Jeff LaBar does have an interesting guitar tone and approach here, and Chaz West's angrier vocal style definitely changes the boy band's pop tone.  I'm also not 100% sold on this version of "YMCA", to be honest.  Yeah, the original is cheesy, but its CLASSIC CHEESE and is such a fun sing-along that it is nearly impossible to improve upon.  This is a viable effort to update it and turn it into a hard rocking number, but without the campy approach of the original, I think the effort is lost in translation despite my love for just about anything that Kelly Keeling does vocally.

One other thing that really brings this project together for me is the overall feel of the production.  JK Northrup handled the production on this project, with CJ Snare twisting the knobs and doing the mixing.  Each of these songs is crisp and clear with solid, clean production that doesn't vary in sound quality, volume level, or clarity from track to track.  That is one of the most annoying things for me with a lot of covers or tribute albums; the production just sucks!  Not the case here, as Mr. Northrup and Mr. Snare prove they are more than capable behind the production board.  Hats off to JK, CJ, (sounds like an alphabet!) and all who helped bring this body  of work to life in the editing room and on and mixing boards.

Overall, while I still prefer the originals disc of this two disc package, this is a very nice contribution from yet another incredible cast of performers and musicians.  People who are looking for tired sounding reproductions of their all-time favorites need to look elsewhere as nothing here is left untouched or unaltered in an attempt to pump new life and new feel into these tracks.  You may have cringed at some of the originals, but I challenge you to give these rejuvinated versions a fair chance and say that you don't have at least an improved perspective on the N'Syncs and Hansons of the world!

Rating:  This is a very crankable disc filled with fantastic performances and some awesome re-writes on a decidedly unusual collection of covers.  Solidly performed and produced, this should turn some heads once people catch the lyrics looping through their brains!  Crank this to 8.5!

For more on the Cigar Chronicles Volume 2--The Originals disc, click here!

Back To Reviews Index
Posted by arttieTHE1manparty at 11:08 PM