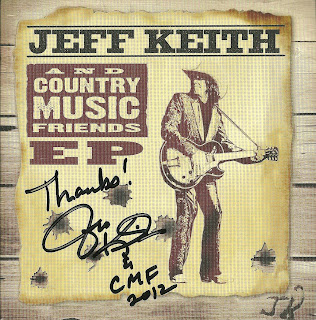 (c) 2012 Jeff Keith Country Recordings
CMF is:  Jeff Keith, Kent Goodson, Pat Boone
Additional musicians:  Penn Pennington, Herb Shucher, Billy Contreras, Ray Von Rotz
Backing Vocals:  Jeff Keith, Penn Pennington, Sheila Fowler
For people who may be inclined to pick up this little EP from Tesla frontman, Jeff Keith, be warned:  THIS IS NOT A ROCK RECORD AT ALL.  I know, I know, people will say, "Well, duh, it says 'country music friends' on the cover", but I cannot overstate this fact: THIS IS NOT A ROCK RECORD AT ALL.  It is not Keith and some current country superstars doing Tesla songs, or Keith covering songs of some of todays country acts.  This is Jeff Keith doing straight-up, OLD-SCHOOL country music.  The music on this EP owes more to old George Jones or even Hank Williams, Sr. than it does to anything on country music radio today, as there is not a single hint of rock in the country music contained here.  This is country music that is rooted more in the acoustic country sounds of the 50's and 60's, and which many people would have labeled "country western music" prior to the Outlaw Country movement (Waylon Jennings, Willie Nelson, Hank Williams, Jr., etc.), the Urban Cowboy movement (Dan Seals, Conway Twitty, Mickey Gilley, etc.) of the late-70's/early 80's, or the New Hat movement (Garth Brooks, Clint Black, Alan Jackson, etc.) of the late 80's/early 90's.
While not bad for what it is, I highly doubt more than 10% or 15% of Glitter2Gutter readers will find much to take away from this effort.  Sure, Keith still sounds much the same, although he has added a "country twang" to his vocal approach, and he does a humorous job of name-dropping numerous Tesla songs in the humrous "Same Ol' Cowboy" (if you hear this song, see how many Tesla titles you come up with...), but nothing here is going to intrigue people who are looking for anything even remotely Tesla in nature.  Likewise, fans of the current rock-infused country sound of Eric Church, Brantley Gilbert, Jason Aldean, Zane Lewis, or Big & Rich, for example, will also find very little to like on this effort, as there is none of the drive, pomp, or power of the music these acts possess.
As someone who grew up with Merle Haggard, Johnny Cash, Johnny Paycheck, Conway Twitty, and CW McCall, among numerous others, blaring off the turn table in my parents' home of the early 1970's, I can appreciate a bit of old school country from time to time (love Haggard and Cash to this day).  And as someone who was a country radio DJ for several years, I can also appreciate a good deal of the more rock-edged country of the 90's and today, even if I am not what I would ever call a fan (though I do dig Eric Church's music).  However, it is unlikely I will ever pull this EP out again, instead filing it away, slipping it in alongside the Tesla discs that I still repeatedly pull out and will continue to play for many more years.
The packaging is of virtually no quality at all, as it comes in a simple cardboard slip-case with no liner notes to speak of and zero lyrics.  The information doesn't even tell you who is playing what instrument.  Also included on the CD is the last track, the "CMF Interviews" which is Keith and others explaining how the project came together.  I had to laugh because Keith's "aw, shucks, I'm just an Oklahoma good-ole-boy" schtick wore pretty thin on the very first listen and I haven't played it again....and neither will anyone else who picks this up, most likely.

For any who are curious, mine was one of the first batch ordered, so it came autographed.  I believe these have all been sold out, but you can check his country music site store; perhaps more will be sold eventually.  If you are open-minded to all kinds of music, or if you are a Tesla completist who has to have everything any band member has ever done, you can get the CD at www.jeffkeithcountry.com for just $10, and digital downloads are also available, I believe.
Rating:  It's almost unfair to put this on the standard Glitter2Gutter rating scale, as it really has nothing in common with anything else here, but to be fair and honest to the rockers here, turn this down to a 2, giving it just a spin or two to play "name that Tesla title" on the opening track.  After that, I'd just turn it off.
(Disclaimer:  if you are open-minded musically, and can appreciate old-school country, I would be willing to bet there are more than a few people who would "rock this" at a 6 or so...)
Back To Reviews Index
Posted by arttieTHE1manparty at 1:26 PM