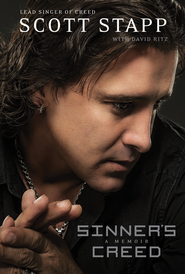 
Love them or hate them, it is impossible to deny that Creed is one of the biggest rock acts of the past twenty years, selling more than 40 million copies of their four multiplatinum studio albums.  As such, the band's lead singer, Scott Stapp, who has also sold more than two million copies of his solo album, The Great Divide, is one of the most beloved...and most loathed...singers of that same time frame.  Never one to shy away from a fight (which he talks about in this memoir), Stapp steps up to the plate to deliver, along with co-author David Ritz, a solid, extremely readable account of the triumphs and struggles of this not-yet 40-year-old megastar.

Without giving away too much detail, Stapp tells of his abandonment by his biological father, the abusive relationship with his step-father, the rise, fall, and disbanding of Creed, the semi-suicidal accident that nearly claimed his life...and how a rapper saved his life!  From the band's early days as Naked Toddler ("The name didn't go over well..." p. 98), to Brian Marshall's departure, to the creation of Alter Bridge (which Stapp never mentions by name), the various stages of the band's career are discussed from Stapp's unique point of view as the man out front...and then out of the band.  The singer also discusses the meanings behind numerous Creed songs, his frustration with the band being labelled  a "Christian band" ("we didn't want to be Stryper..." p. 136) despite the fact that he is a profound Christian who writes deeply spiritual, often prayerful lyrics, and how his wife and children have saved his life on multiple occasions.  He also discusses in candid detail his struggles with drugs and alcohol, multiple rehab stints, and how he finally surrendered everything to God in order to salvage his life, career, and family.

Included at the end of the book are the lyrics to all of the songs that Stapp has written for Creed throughout the years.  Oddly, however, the lyrics to his solo album are NOT included.  I am not sure why; perhaps this was simply an oversight.  It is a nice inclusion for people who are following along as he writes the book and wants to get further reference to the lyrics he frequently quotes throughout.

Another little unique twist to this book is the inclusion of a free download of a previously unreleased Stapp song, the title track to this book, "Sinner's Creed".  Not sure if this will be a part of the next Stapp solo release (which he mentions here) or the next Creed studio album (also hinted at), but it is a solid track that will be loved by Creed/Stapp fans...and just as equally hated by those who can't stand the band or the man.

Again, a very solidly written book that brings to light Stapp's side of some of the controversy that has surrounded him and Creed through the years.  More than that, though, this is a book about a Christian man's struggle to reconcile the rock n' roll lifestyle he admittedly lived (and abused) with the faith that he claims he always carried with him, and his ultimate understanding that he could not have it both ways and that something would have to be sacrificed if he was to survive.

Definitely not a tell-all, not a slanderous account, and not a sordid details type of book, but a compelling page-turner that I finished in just a few days time.  Recommended reading for fans of Stapp or Creed, or for anyone looking for a positive, faith-based book about overcoming personal struggles and demons.

Back To Sleazy Readers
Back To Home Page

Posted by arttieTHE1manparty at 3:33 PM