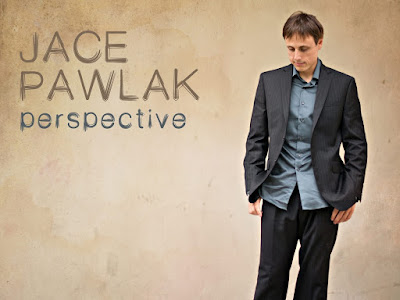 Jace Pawlak is not a household name, although if you are familiar with the melodic hard rock scene of the past few years, you have heard his music before, even if you didn't realize it.  Perspective is Pawlak's third solo release, and I have to be honest in telling you I hadn't heard the previous two, so I have no basis of comparison between these new songs and his older material.  I had heard, however, that Pawlak's previous material was typically defined as anything from "driving hard rock" to "melodic rock with an edge", so to say I was anxious would be an understatement.

The Kickstarter-funded effort starts off with a cool melodic rocker, "Cry", which instantly brings back the feel of the early-to-mid 90's melodic sound, with a driving guitar interspersed with keyboards, layered vocals, and a solid, if not stand-out, rhythm section.  This is a solidly written song that really showcases Pawlak's sense of melody and his ability to craft a catchy song.

"While We're Here" follows things up with a very contemporary Nashville sounding song.  In fact, with just a tiny bit of tweaking, I could hear this song all over country radio...although I honestly think it would "rock" harder on country radio than it does here.  There's an acoustic rhythm guitar woven throughout the track, with a strong percussion presence and an odd...is it a flute?...woodwind line of some sort.  Very upbeat but a rather stark departure from "Cry".  Still, I was feeling pretty good about the album at this point.

"What If We Were Wrong" is a big time piano-based ballad that has Richard Marx written all over it, in my opinion.  Expertly written and executed, this would be a great Top 40 or Hot Adult Contemporary radio song...if this was 1989.  In 2015, however, no matter how flawlessly the song is crafted, no matter how emotive the vocals, the track comes across as rather dated and I'm not really sure who the target audience is here.

Things start to come apart for me with "Don't Talk To Me", which is reminiscent to me of something Kool and the Gang or Stevie Wonder would have done in the 70's, as it is a very jazz-infused number with plenty of (digital) horns, harmonica, piano, finger snaps, all layered over a bass-dominated danceable groove.  Just not my thing at all and I had some serious reservations going forward...and I was only on track 4!

"The Unknown" is a passionate piano ballad that showcases Pawlak's soulful singing voice and strong songwriting ability, as does the bluesy "We Don't Know Anything", but again, neither of these is truly a rock number, and I'm imagining that a lot of listeners are wondering how this is the same guy that has had songs recorded by Tango Down and Far Cry, among other melodic hard rockers.  These songs feel more like Billy Joel songs than anything else I can think to compare them to, including the strong piano work on both tracks.  The same goes for the uptempo, piano-pop of  "Jodi's Just Running", which again has a very Joel feel to it musically, while lyrically there's a definite Mellencamp bent here.

"Renegade Heart" is much more in line with what I'm guessing most listeners are seeking, as this is a slick, 80's-inspired, guitar-driven AOR number with an easily accessible chorus and a simple, yet effective, melody line that carries the song right through the surprisingly powerful...if too short...guitar solo and bridge.  A toe-tapper, for sure, Perspective would benefit from more "Renegade Heart" styled songs.

"The Same Mistake" is another Nashville-tinged, acoustic country song that, in the right artist's hands, would be a solid album track.  In fact, this song feels feels a lot like the country rock fare that was being put forth in the 1990's by Blackhawk, if you are familiar with that band (I'm showing the fact that I worked in country radio for about 9 years now, aren't I?)

"Little Star" closes things out in a very Journey-esque way, reminding me somewhat of "Faithfully".  At the same time I could have heard country rockers Restless Heart tackle this track with great success in the late 80's/early 90's.  While I believe it is written about a child, I could definitely hear this being played at a wedding or two, as it is a beautifully crafted piano ballad with a lot of emotion poured into the performance.  A strong album closer and one of the best songs here, without question.

There are some really good moments on this album, and virtually everything showcases a songwriting ability that is lacking in each of the various formats that this album touches upon.  However, it is this very lack of focus on style and even a target audience that makes this album feel very disjointed to me.  There is ZERO doubt as to Pawlak's writing ability, nor his musical ability, as he performs virtually every instrument on this record.  I just can't help but feel that there are going to be a lot of people who pick this album up expecting something much more in the melodic rock/AOR vein than they are actually going to find.

Perhaps Pawlack addresses this seeming lack of focus best himself.  In the press release that accompanied the album, the following quote was included:

"Like every writer, I just want to be heard.  When I release my recordings, I'n not 'done;.  It's just another step in trying to be a successful songwriter, to get people to consider my material for their band.  It does not end with me.  I want every song I write to be covered by ten different bands".

As such, perhaps I approached this album as a project, when in actuality it is more like a showcase, which makes sense with the way these songs seem to come at you from all different directions and pull from multiple styles and influences.

That being said, I can't say that Perspective is going to be an album that I find myself reaching for with any kind of regularity.  It just doesn't grab me and hold my interest for long enough stretches for this to be something I return to.  I will, however, endeavor to track down Pawlak's previous two efforts, as I have since sampled them a bit and find them to be much more like the guitar-driven melodic hard rock I was expecting on Perspective.

Rating:  Rock this at a 5.5, with the superb songwriting and strong musical performances virtually guaranteeing that Pawlak's music will be heard somewhere, by someone, which is ultimately his goal.

Posted by arttieTHE1manparty at 2:23 PM