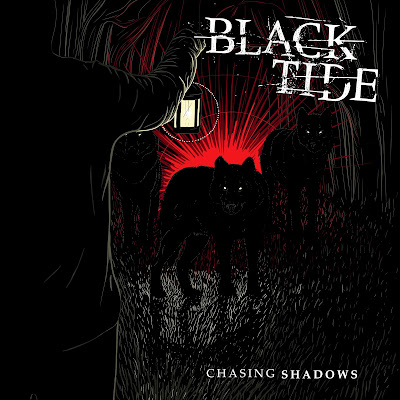 Black Tide returns after a fairly long layoff, and a couple of line-up changes, to release this, their third album.  Garcia, who has been the vocalist since day one, now plays bass as well following the departure of Zakk Sandler, with Austin Diaz now handling all guitar duties.  Also gone is previous drummer, Steven Spence, replaced here by Cody Paige.  As one may expect with the addition and subtraction of members, there has also been a modest change in the sound of Black Tide, although, to these ears, it is still very much the same band, blending melodic modern metal with elements of speed and thrash metal into one massive wall of sound.  No, its not the musical style that has changed so much as the polish that is put into the production of the new record, which, in my opinion, actually benefits the band and allows for a larger audience to discover and enjoy these Florida boys' music.

The album starts off with a classically-inspired acoustic intro which for a few listens creates a big, crescendoed build up to the crushing "No Guidelines".  As we all know, I don't like intros, outros, or most interludes, so "Intro" becomes an instant skipper for me after a few listens, but more so I can get to the meat of the record than due to any musical missteps made on "Intro", as it is actually performed very well.  Speaking of "No Guidelines", as the guitars come ringing in and the drums begin their crushing assault, I am instantly reminded of the direction Bullet For My Valentine took on their last couple of records:  still fast, still aggressive, but decidedly more polished than on, say, Scream, Aim, Fire.  This is exactly what Black Tide has done on this record, and I think they have done it to great effect.

"Angel In The Dark" is the next track, and also the lead single from the record.  Blending Euro-power metal with their usual melodic speed stylings, Black Tide steps up their game here a bit by adding this new element to their sound.  I particularly like the power metal-styled break downs in this song as well as an extremely competent solo from Diaz, who really comes into his own on this record, incorporating more melody into his solos and not just shredding for speed's sake.  Garcia's voice really works well on this type of song, and this is easily one of my favorites from the record.

"Predator" is a gritty, speedy metal number with a cool, subtle tempo change as the band works its way into, and then back out of, the chorus, displaying a musical skill that was not always present on the band's first couple of efforts.  The lyrics are a bit 80s-ish (read "cheesy"), and Garcia drops a few seemingly unnecessary f*bombs here and there, but again, this is a solid speed/power number that really benefits from the newer, more polished production sound and is a number that I imagine will go over exceedingly well in the live setting.

"Sex Is Angry" is another musical highlight from this record, as it really showcases the band's willingness to experiment with styles and tempos outside their comfort zone.  Despite the title of the track, there really isn't any "anger" to the approach of this track musically (the anger is in the lyrics dealing with a dysfunctional relationship).  What there is is a band adopting a far more mid-tempo approach, utilizing an 80's style not all that dissimilar from something Whitesnake may have pulled off back in the day.  Big guitars, thundering drums, perfectly placed keyboards as supporting instruments...what's not to love if you are a fan of the classic hard rock sound of the past.  Again, the lyrics are a bit...misogynistic, I guess...at times, but doesn't that also really fall into a lot of the 80's lyrical themes of the day?  One stark difference here is the inclusion of a pure burst of Black Tide speed on the extremely short guitar solo, stepping the band outside the restraints of the rest of the song, but then on the second solo, Diaz slides back into the groove of the song and pulls off an extremely tasteful piece of work.

"Heaven" is a big power ballad, again, new territory for the band, and it is executed very well. I'm guessing if there is going to be a song that brings serious blow-back for the band from this record, this will be the track, as it is decidedly NOT the Black Tide of the previous two records.  It's a shame that it is likely going to be dismissed out of hand by many, because there are actually a lot of intricate parts here, especially in the acoustic guitar work....and especially the Spanish guitar use in the song's solo...and the subtle rhythm section use that holds the track together.  Garcia also gets to showcase an ability to utilize his voice as an instrument, and not simply as a sonic sledgehammer.  I'm not saying this is my favorite track on the album, but it is definitely a well-performed ballad and worthy of being placed on this record.

"Burn" is another track that allows Diaz to flex his solo ability, while also really letting Garcia sing more than scream, which had never been the case on previous releases.  "Chasing Shadows" and "Welcome To Misery" are also all worthy numbers on this record, and "Before We Form" is another track that many fans of the 80's/early 90's may find themselves appreciating more than they may have expected from a Black Tide effort,

Several die-hard Black Tide fans have been spewing quite a bit of venom at the band for this album, claiming that the band's edge is gone.  I disagree.  I think there is still quite a bit of snarl and bite to this album, but it is now in a more palatable package to the complete hard rock family than previous albums were.  Is the speed still present?  Yep, in measured doses.  Is there still aggression?  Again, yes, but this record isn't about pure speed, angst, and the sheer desire to crush the listener's skull with aural violence or to snap their spine with an endless breakneck pace.  This is an album that shows maturity and evolution, which had to happen to a band that was signed when the members were all, what, 15?  There are songs now utilizing different stylistic approaches, different tempos, and different musical elements, sure, but what's wrong with growth?  Add in the various line-up changes, and it is inevitable that Black Tide's sound is going to transition a bit, but Chasing Shadows is a darn fine album, in my opinion, and one that I think will contend for Top 20 status for me at the end of the year.

Rating:  Very crankable and much more accessible to the general hard rock/metal audience than in the past.  Crank this to a really, really solid 8!

Back To Reviews Index
Posted by arttieTHE1manparty at 10:28 AM